In our previous house I had a rose garden – I planted and maintained 42 rose bushes, lovingly collected cow poo, mulched, pruned and relentlessly sprayed them to combat the Queensland climate’s unsuitability for growing them. I also was a member of the Queensland Rose Society so occasionally displayed blooms at shows and in competitions, gaining an appreciation of the ‘technical appreciation’ of a bloom’s structure, symmetry and form. Needless to say I love roses. 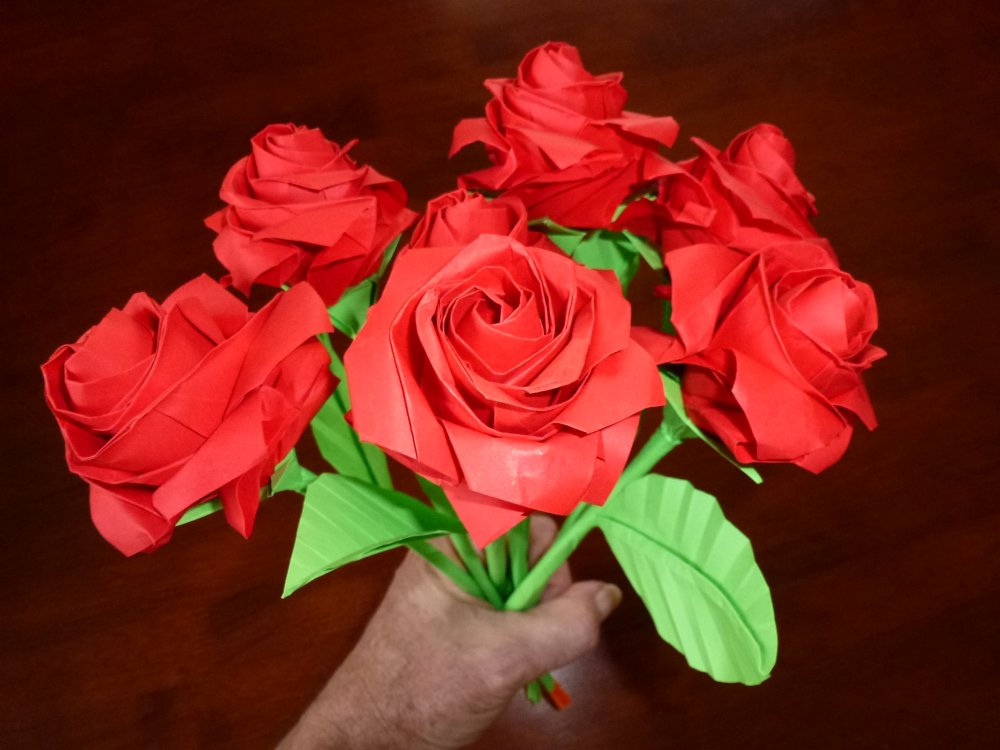 I have long been fascinated and frustrated by the modified Kawasaki Rose II in equal parts, it’s mathematics is mind-buggering and all the techniques I had been exploring contained so much pre-creasing that the resultant bloom is mashed and dented beyond recognition. This variation, designed by Naomiki Sato is quite the loveliest thing of this ilk on the planet at the moment in my opinion.

Determined to master the technique, I stumbled across a video of the fold and it’s internal mathematics and method of construction, concentrating on placing ONLY the folds that are in the final bloom – it finally “clicked” with me and, over the last month, I have perfected this fold in secret.

It is an astonishing use of a pentagon, although in truth the method works with any regular polygon. Roses, like most flowers are based on odd numbers and I think the pentagon-based rose looks best, square-based blooms seem simpler and “empty” whereas hexagon and heptagon-based blooms are so dense with petals they look unnatural (yes, I tried and discarded).

The general principal of the fold uses no initial landmarks – risky on such a complicated fold but the result has small irregularities because of the folding method and this makes it much more real – nature is imperfect in it’s mathematical layout and these minute irregularities add beauty; once you master what causes what you have a good deal of control over the end product. That said, no 2 roses I have folded using this method are the same – nor do i want them to be.

From smaller squares I wrangled leaves, deeply veined and curved via an ingenius (I think) curved rolled pleat at the back, a calyx folded from a smaller frog base, and a wrapped stem solution that is solid and should suit the flower to actual floral arrangement. A touch of MC was used to add rigidity and affix the top/bottom of the twist and affix the leaf. A little craft glue to stick the bloom to the calyx (shhh!) and the complete unit is simply lovely in my opinion.

Keeping anything secret from my wife is difficult, I think I managed it. I have a bunch to give her as a present and a couple extra for other special ladies I will see in the next couple of days. Fortunately my wife did not notice (or did not comment) on the full rubbish bins of discarded unsuccessful folds – I was not being OCD, merely wanting the technique to “flow” and the bloom to be predictable, feel right and be instantly recognisable. I got there in the end. 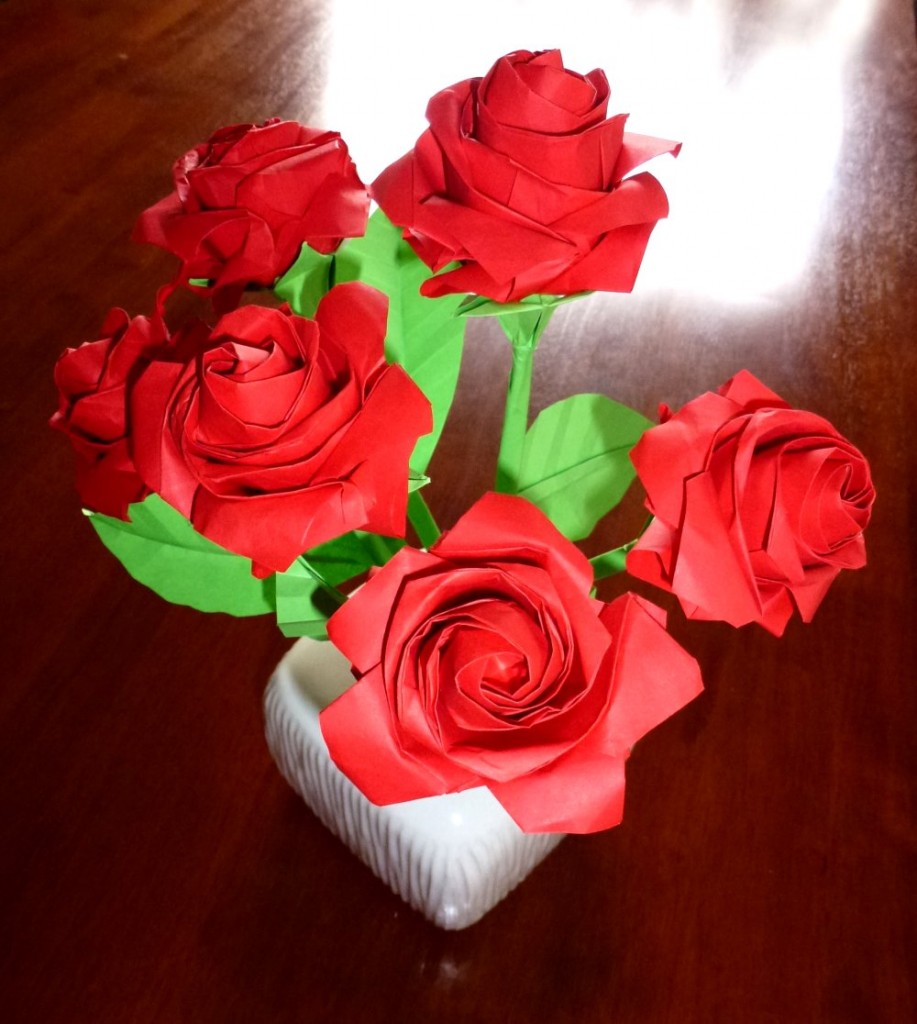 Postscript: As it turns out, this was meant to be – my wife’s boss gave her a lovely sculptural vase as a christmas present, my half dozen roses look like they belong in that vase – synchronicity sometimes occurs without any clear plans. 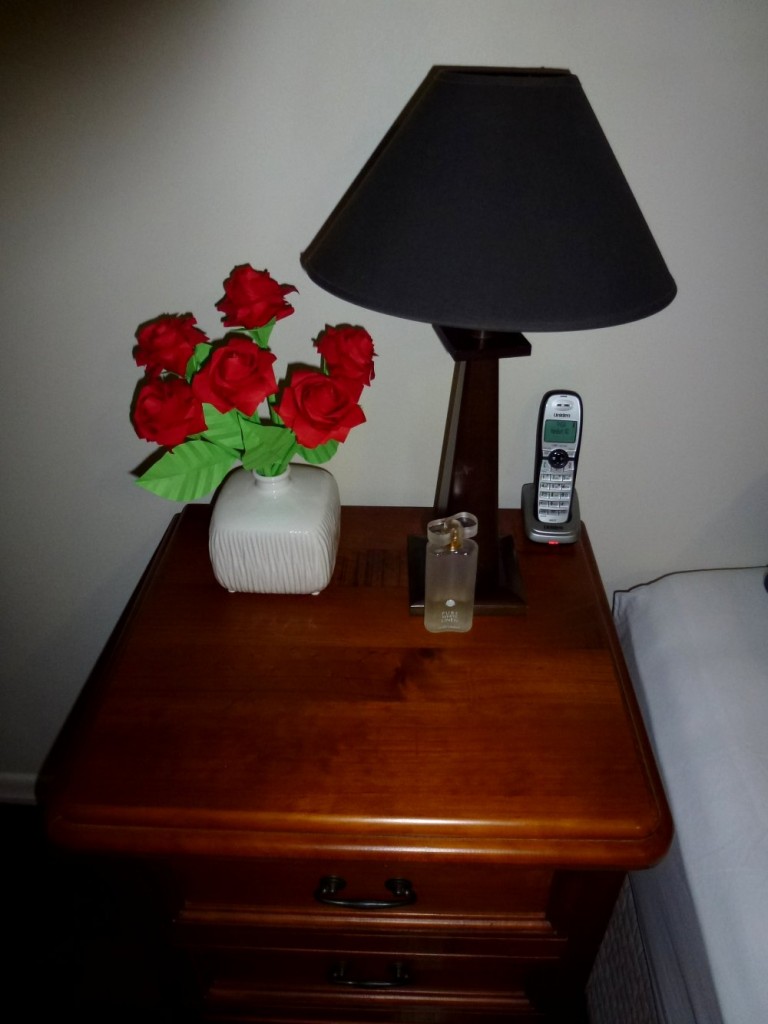 Origami is ephemeral, hopefully these blooms will last longer than the real roses they so beautifully emulate. Merry Christmas one and all.