Few Origami models reach Iconic status, few have the charm and grace of Eric Joisel’s Pangolin. I thought I would have a go at this fold: 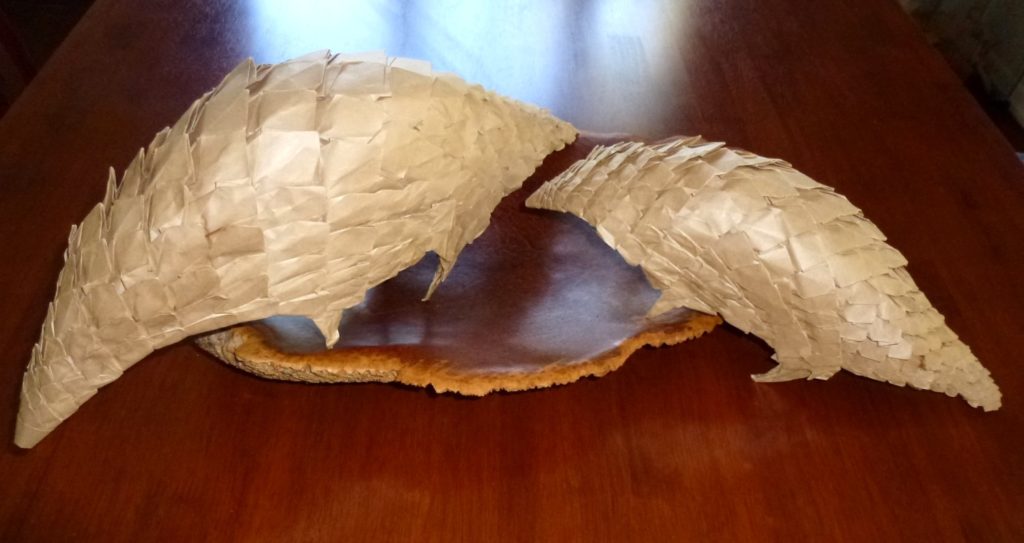 Based, in part, on a field of diagonal graduated pleats that are “popped” into scaley plates, shaped simply to suggest tail, head and feet, his folds have a unique life breathed into them. 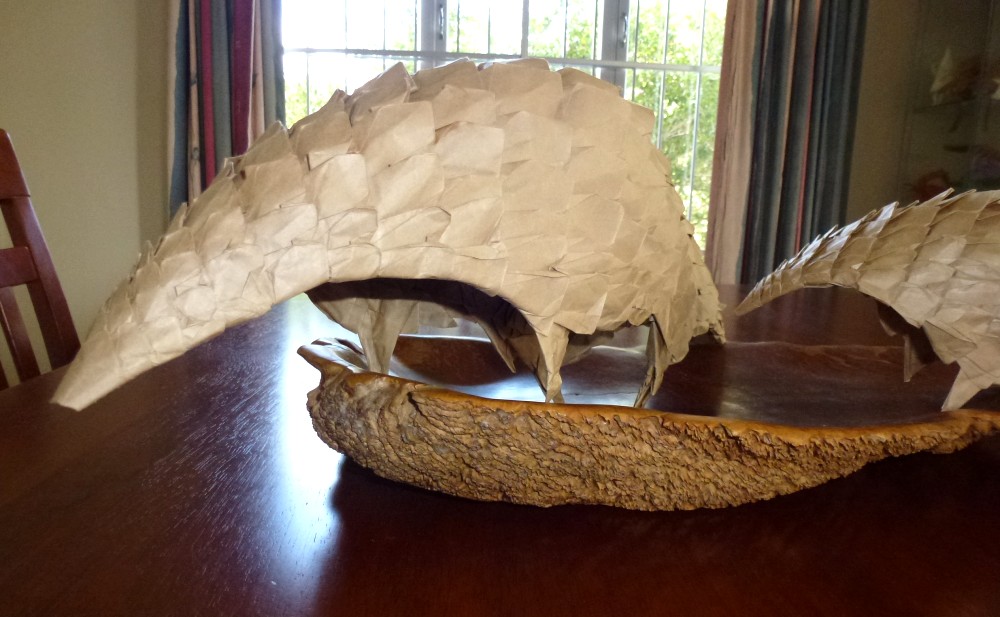 I have long been fascinated by this model, and decided to embark on a journey to learn a little about the fold, with the view of unraveling techniques that might lead towards a similar fold. This investigation has been fraught with complexity. I developed a scheme that created graded pairs of pleat lines via a spreadsheet, transferring the landmarks onto a cardboard template then on to the edges of the sheet before creasing, carefully. I initially started with a 1m square, quickly realising that some of the pleats end up being 4mm – near the tolerance of my fat clumsy fingers, even when assisted by tweezers. 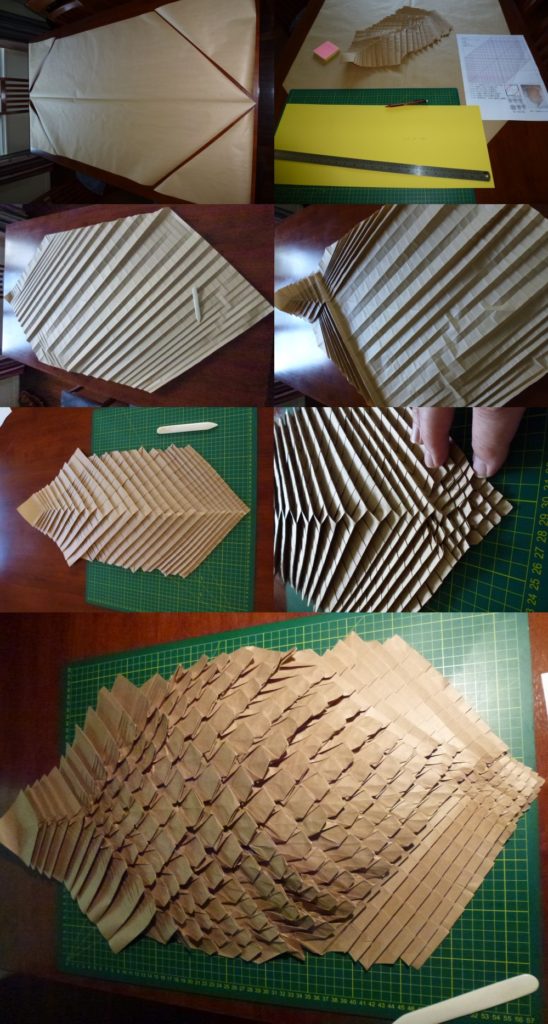 After abandoning my first fold, I doubled the paper size, re-calculated the landmarks and repeated the process. the second fold was HUGE, covering my dining table and making materials handling complicated. After pleating, the scale popping began and the realisation that every scale was different – unlike the RyuJin where the 2000 scales are all the same. Each scale needed a slightly different trick to turn and 420 scales later it was done.

I then (madness descended) decided to complete the abandoned smaller one, knowing a little more in scale turning technique and completed it to my astonishment and delight. The little one seemed to sit better than the big one, weird indeed.

Shaping continues to be a work in progress. I present their current shape, but I think I can improve them with time and a suitable mount. Joisel mounted his on paper faux tree forks, I can see why as the model is an odd shape, looks weird standing on all 4s – the proportions are a little odd – something should I decide to fold it again I think I can correct. 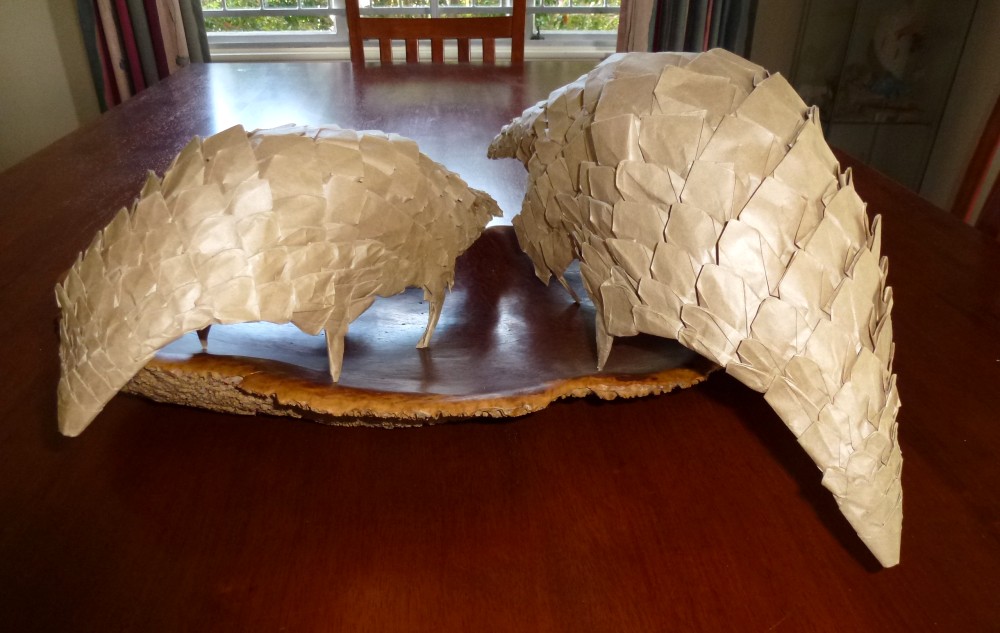 I, like Joisel, added a wire skeleton – this will help with the final shaping also. Interestngly I asked the Origami Mailing list if anyone had seen under one of the originals and Robert Lang, owner of “Pangolin I” emailed me some photos he had taken for me that morning of his – how cool is the internet?

I have NOT faithfully re-created Joisel’s masterpiece by a long run. I did learn a lot along the way and may return to this fold sometime later when the madness subsides. The model is based on a stunningly beautiful corrugation that looks lovely when lit from within – which also gives me an idea for a lampshade somewhere down the track.

I have ended up with a Mother and child Pangolin. I suspect they will be posted again in some form when I work out the best way to display and photograph them. I hope you have enjoyed reading this even a little bit as much as I did learning about this fold. One can only hold the work of Eric Joisel in nothing but awe and amazement – although he considered himself a “bad folder”, we should all be so bad. The international folding community is poorer for his passing, may he rest in peace.