You know, I thought I understood Pizza, then I went to Naples, Italy, and realised I knew nothing about pizza at all: 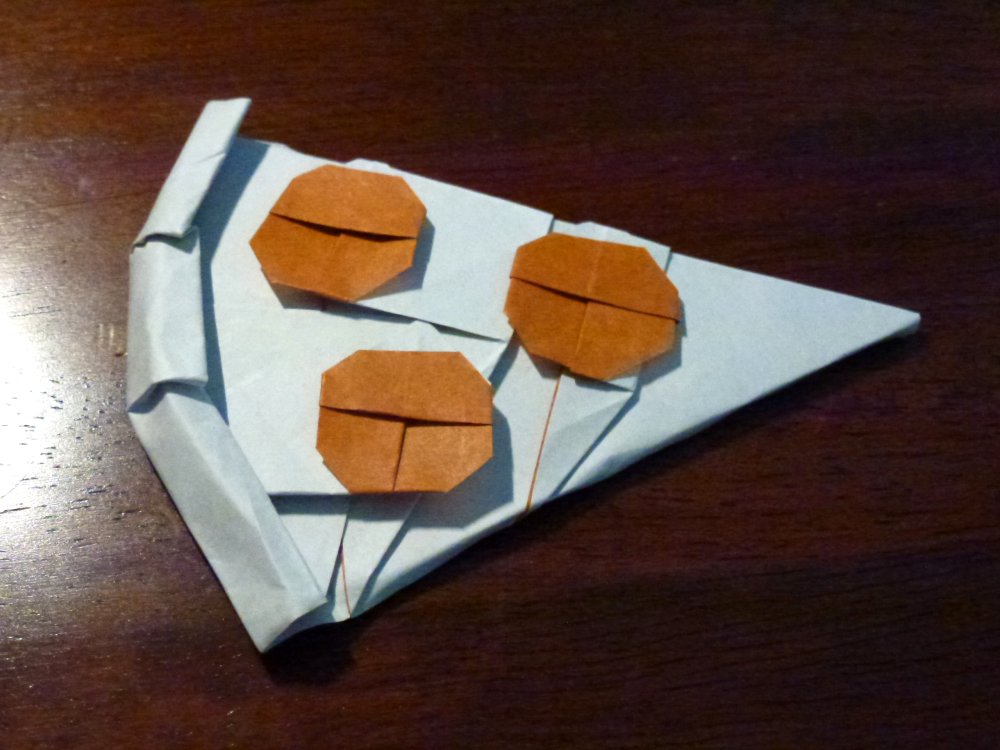 There are moments in your life when things just make sense – that moment of clarity where the perfect combination of crushed tomato, basil and mozzarella on a thin crisp base spends 90 seconds in the wood fired oven and emerges perfect in every way. END_OF_DOCUMENT_TOKEN_TO_BE_REPLACED

After a brutally busy term, it is time to recharge, dance a little, be thankful for the good things that surround you: 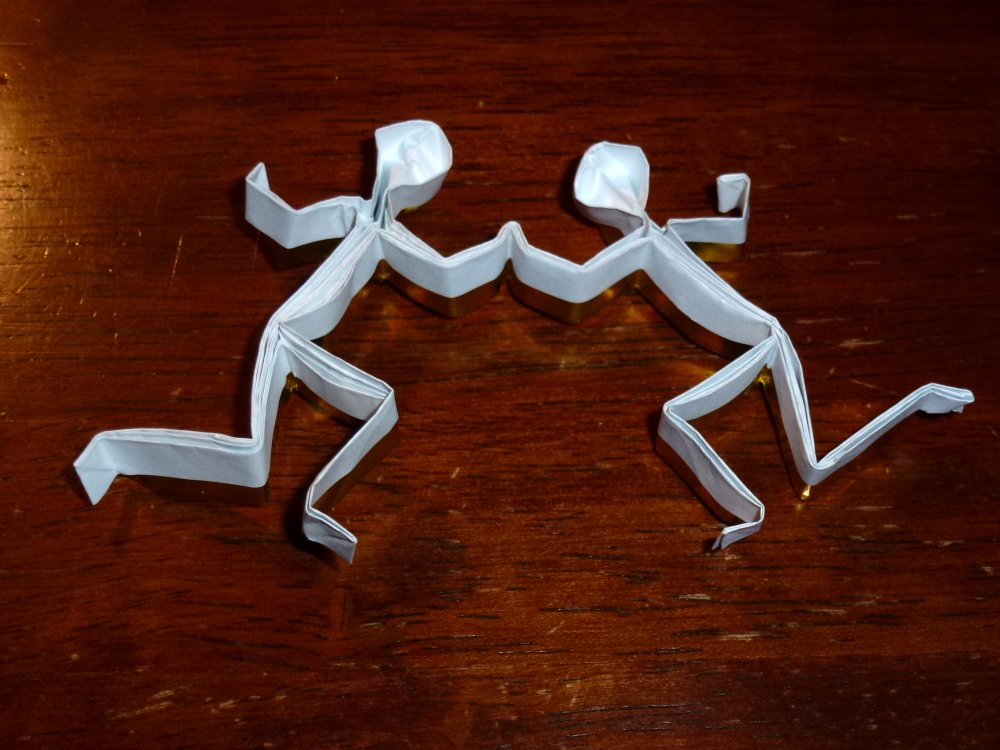 This is Jeremy Shafer’s “The Dancers” – a charming little pleating exercise that takes a square (in this case a 15cm Japanese foil square) and, via a clever set of collapses, isolates 2 people, joined at the hand. END_OF_DOCUMENT_TOKEN_TO_BE_REPLACED

Now apparently, when faces with a wee beastie, you throw a pokeball at it and that, somehow, traps the beastie …inside.. the ball for safe keeping – truly, I cannot make this shit up: 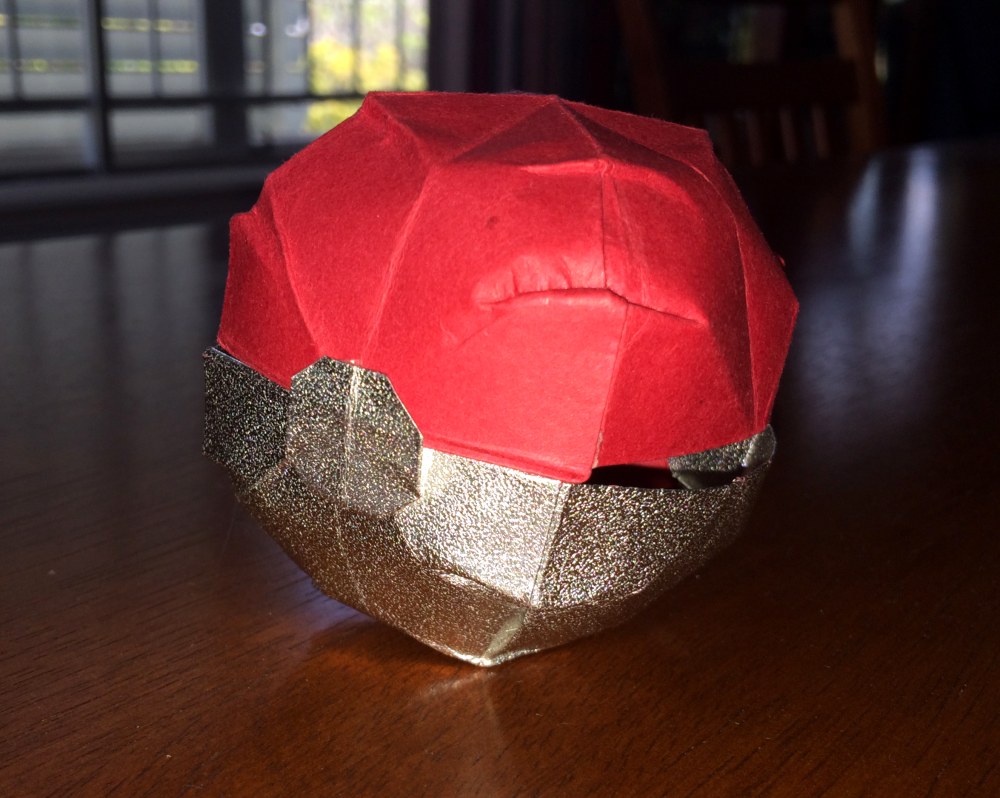 This is Jeremy Shafer’s Pokeball – a genius modular fold using 2 bits of paper that interlock at the hinge, forming a rather lovely clasp at the front. END_OF_DOCUMENT_TOKEN_TO_BE_REPLACED

I have had sheets of Elephant Hide for ages, and read that it was really good for geometric folding (corrugations and tessellations), so set out to find something I could do as fold therapy: 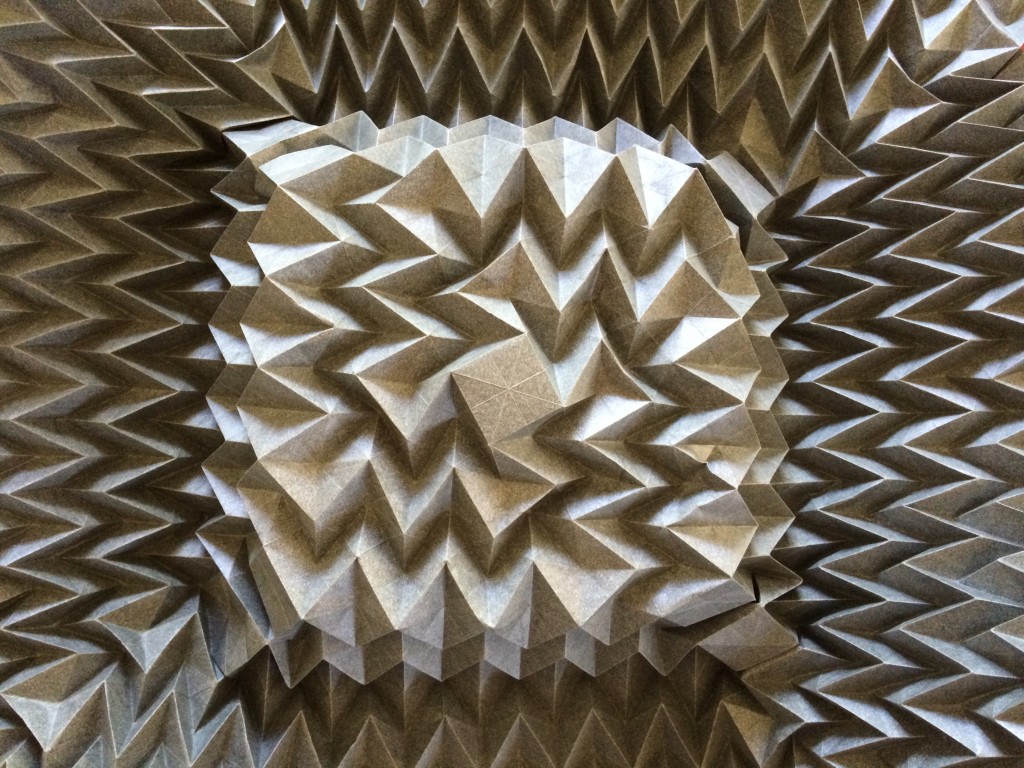 Jeremy Shafer is a genius designer of origami action models and I had seen his series of collapsing “flashers” so thought I would give them a go. they are termed “flasher” because they are tiny when resting, but expand out in an explosion of pleats when you stretch them.

This is the “Flasher Hat” – perfect for the silly season where wearing paper hats seems mandatory. It combines the classic features of a flat flasher with special corrugations and crimps that raise a crown. END_OF_DOCUMENT_TOKEN_TO_BE_REPLACED

Jeremy Shafer is a prolific and super talented Origami Designer: 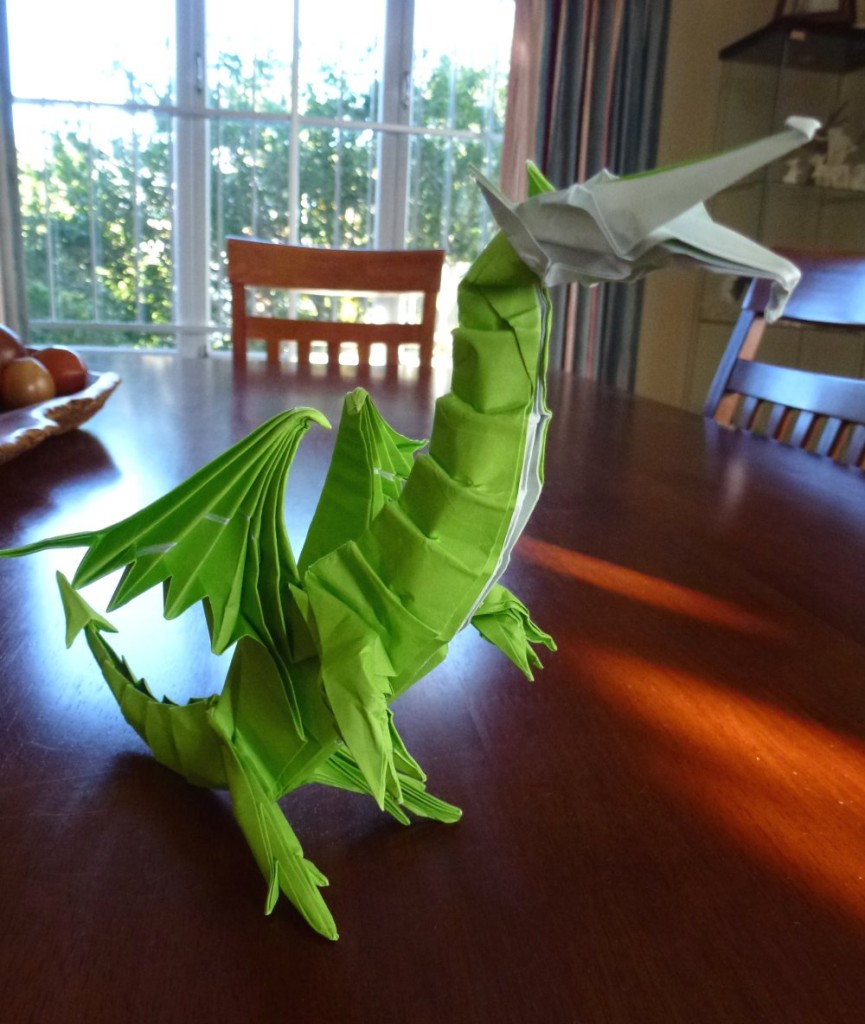 When I saw his video of the Super Dragon Deluxe I knew I wanted to have a go – such a fun “cartoony” dragon with a lot of detail packed into such an accessible fold. END_OF_DOCUMENT_TOKEN_TO_BE_REPLACED

There is always time to make a little peace in our world. 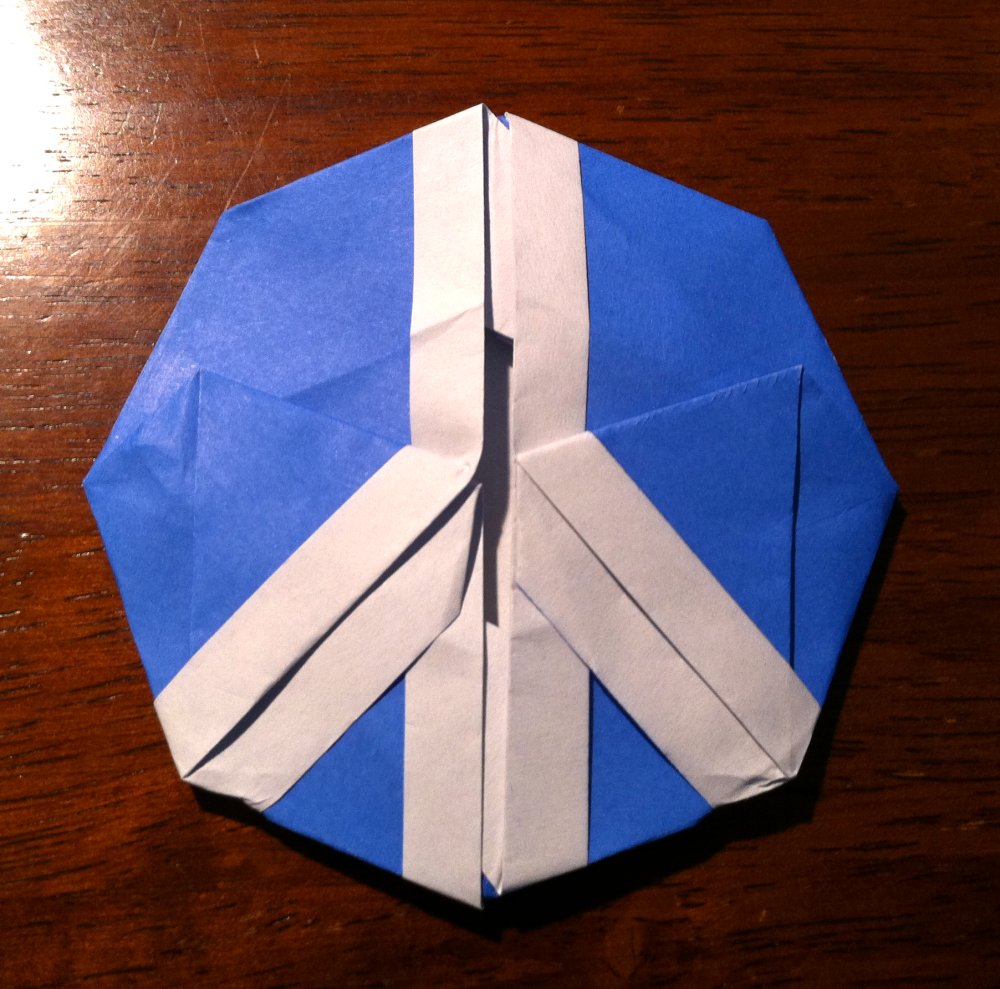 It takes incidents like those that unraveled yesterday to realise that peace is a choice we make as participants of the world on which we live. END_OF_DOCUMENT_TOKEN_TO_BE_REPLACED

April 2, a special day that Jo and I celebrate our Wedding anniversary: 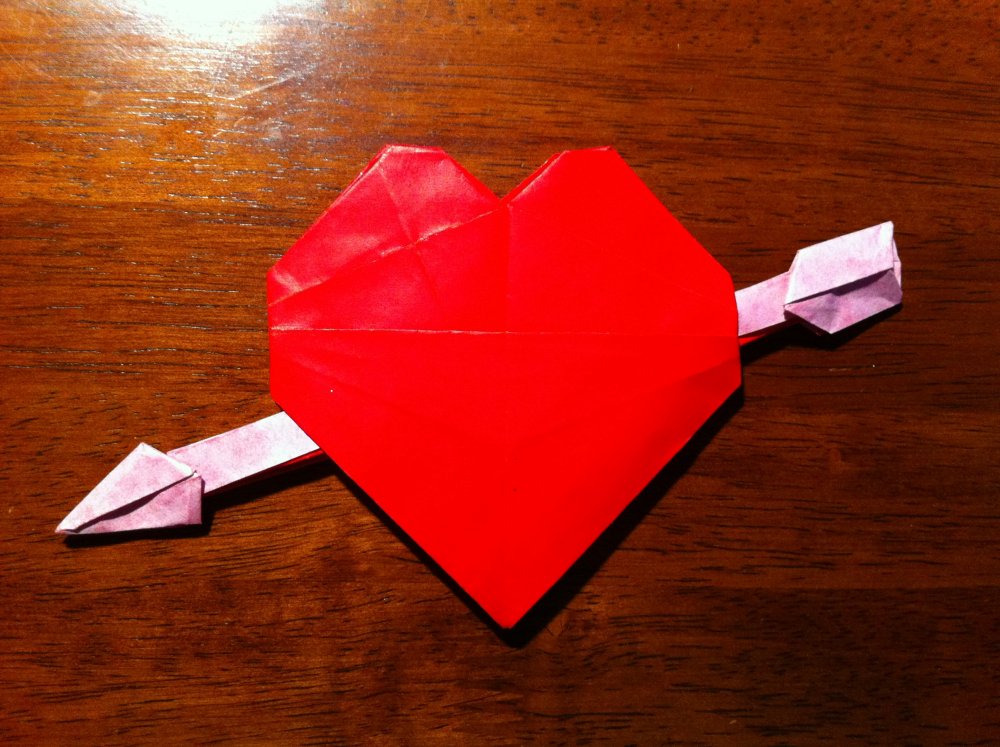 So I thought a schmaltzy, sentimental origami card was in order, so fashioned an origami “valentine” designed by Robert Lang (from “Origami Design Secrets”, a fantastic book). I had not tried this model and wondered how it was possible to sculpt both arrow and heart from the one square of paper – lovely design. I then added a pair of interlocking rings designed by Jeremy Schafer and voila. 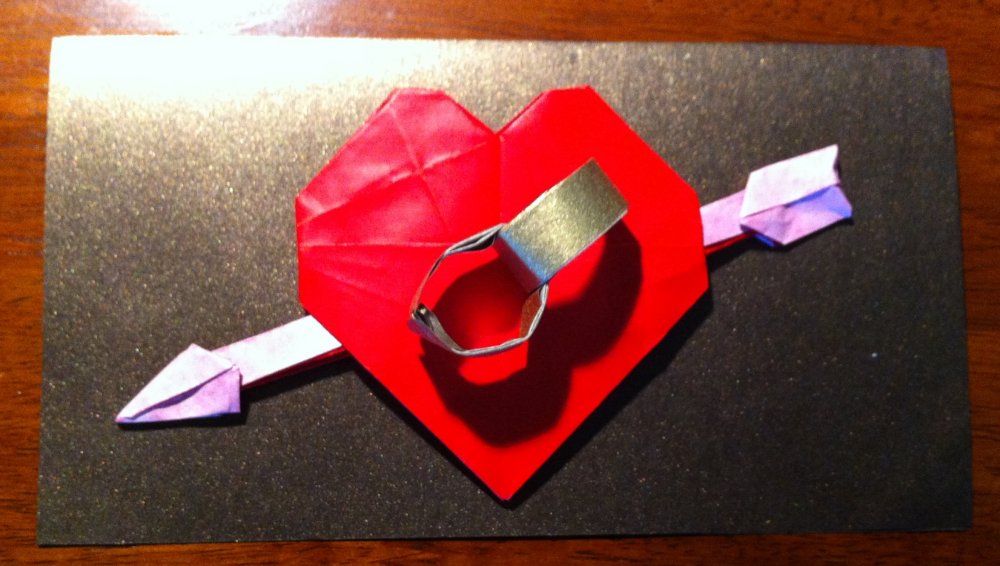 Some shiny cardstock, a printed parchment inner with verse and greeting and it is done.

Much to celebrate, some of that celebration will be done overseas. Win Win.

Now those who know me realise 2 things – I love music but I cannot read those little black dots on the lines for nuts: 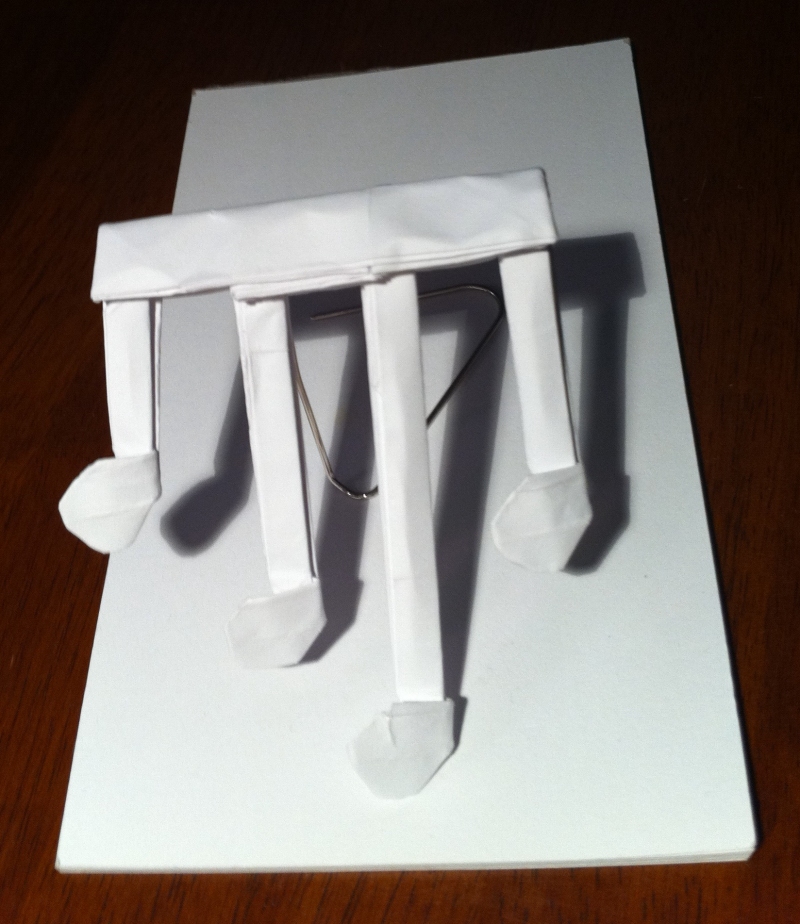 It was doubly problematic when I was in a choir as all those around me were able to sight-read and I … sort of … faked it (I have good pitch and developed a skill of singing along). 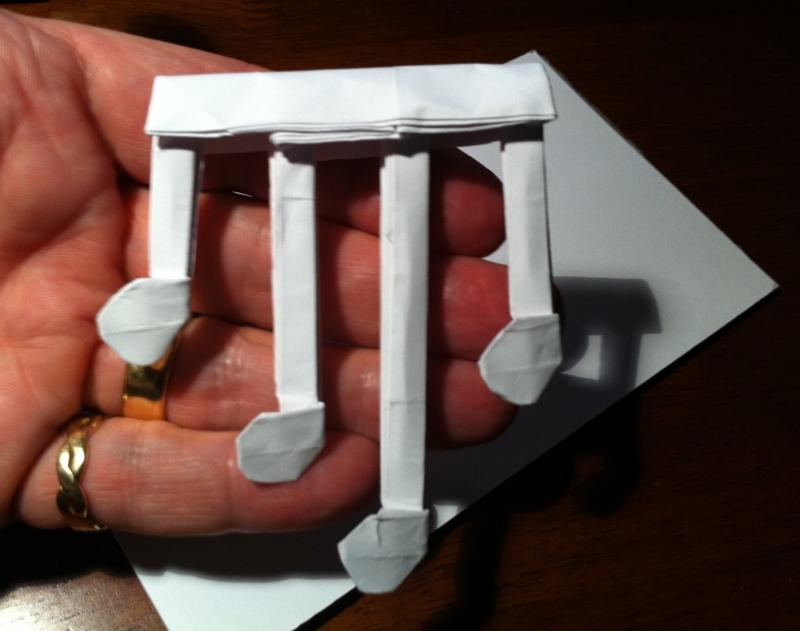 It was/is a frustration that is heightened when I am confused, tired, stressed and … well … pretty well all the time really. 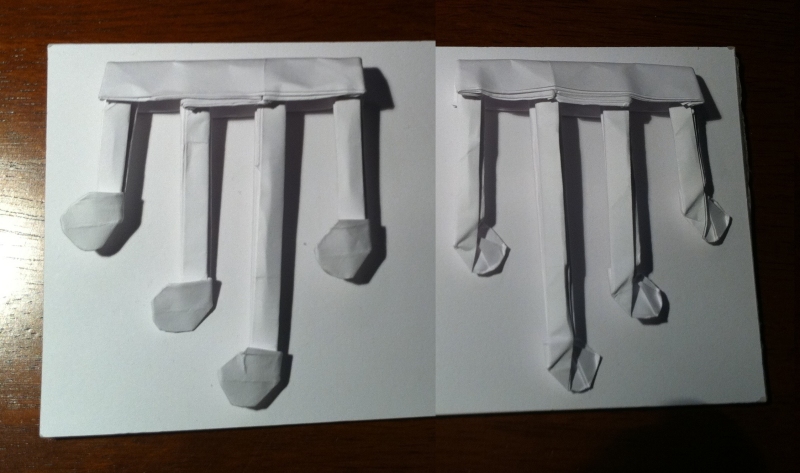 This model, designed by Jeremy Shaffer is a neat little cluster of notes and is very tidy, considering it came from a square there is lots of tough hiding of paper inside to make a polished model. 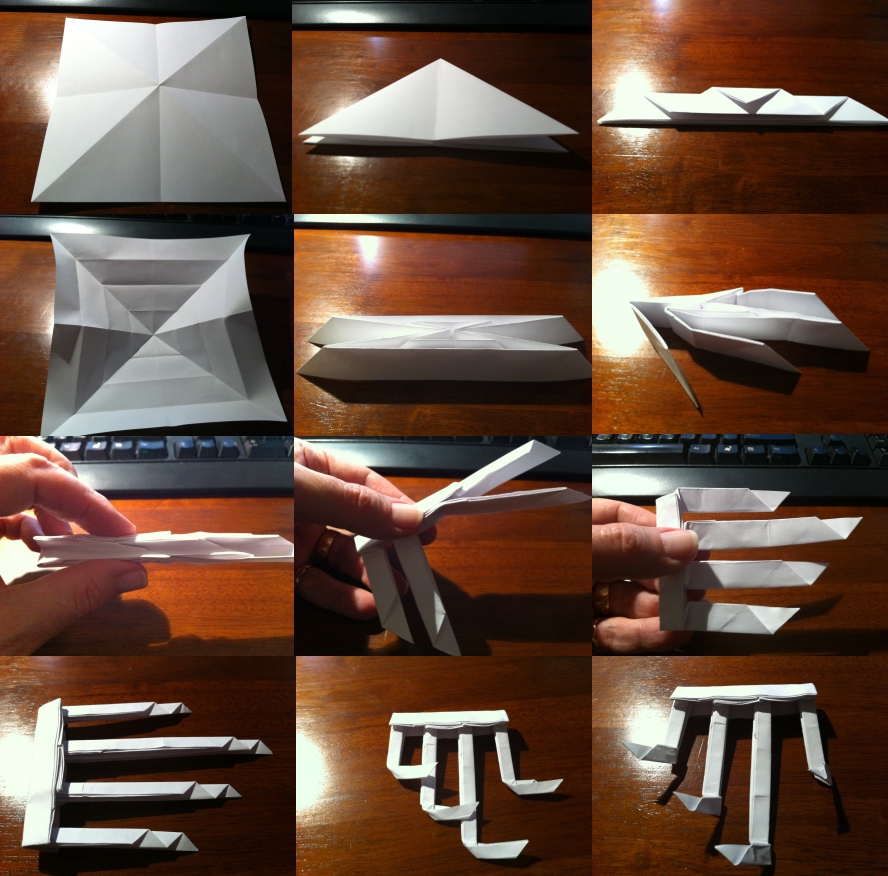 WHY fold this? Well, today JJJ released a new radio station – “Unearthed” that promises to give a whole bunch of unsigned bands a place for their music to be broadcast – this is a wonderful thing IWHO.

For me, September 11 2001 was the day the world lost it, in a big way. Senseless acts of violence were met with years of senselessly violent retaliation and witch-hunts, government sanctioned genocide and publicly celebrated religious fanaticism. There were no winners – we as a species did little to justify our position atop the food chain: 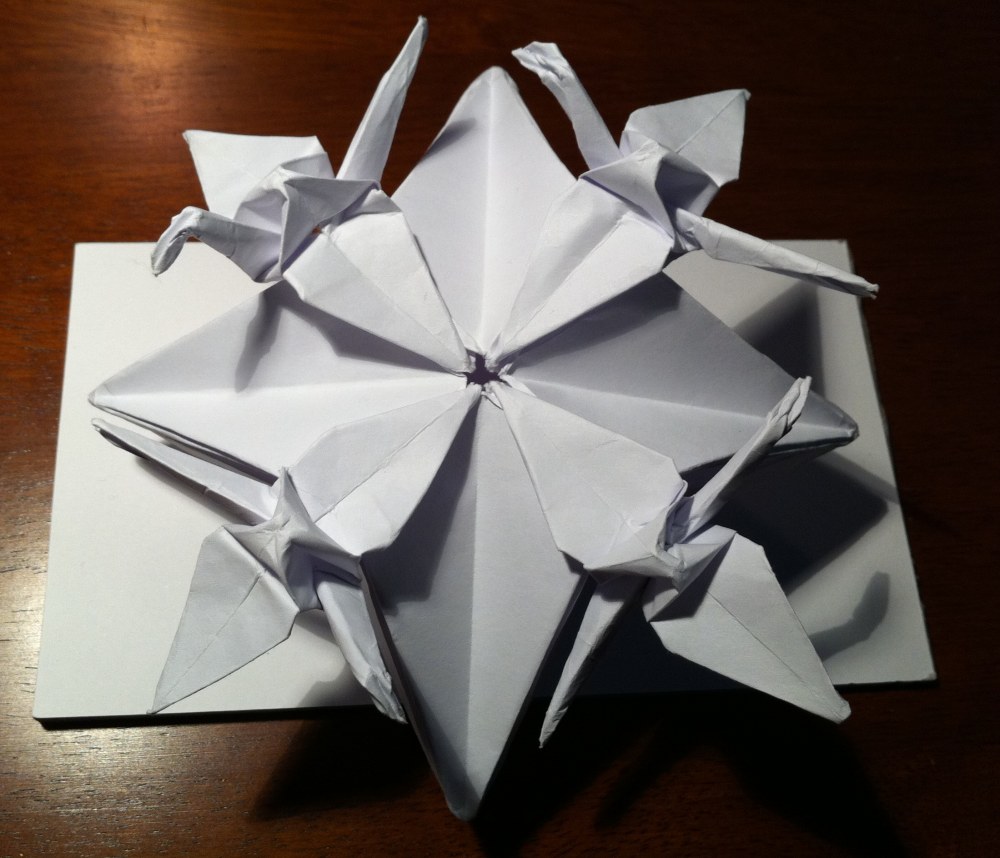 A symbol of peace in the origami community is the crane, there is a branch of the craft that looks to incorporate cranes into other models. this intricate and often torturous craft can result in some stunningly complicated folding – this one by Jeremy Shafer is called “The Star of Peace”.

Using a technique termed “isolating squares”, you reserve unfolded squares and crumple all else out of the way and in this care we end up with a 3d star with a ring of 4 cranes flying around the top layer. The container is waterproof (like a fancy waterbomb).

I fold this with mixed emotions – the media has so skewed the events leading up to and after 9/11 that it leaves me with an even stronger resolve against war, military action and religion … you get that. I live in hope that the human spirit continues to emerge from the morass, looking for ways to help, positive actions that build the dignity of people and erase the artificial barriers of race, creed and sect. 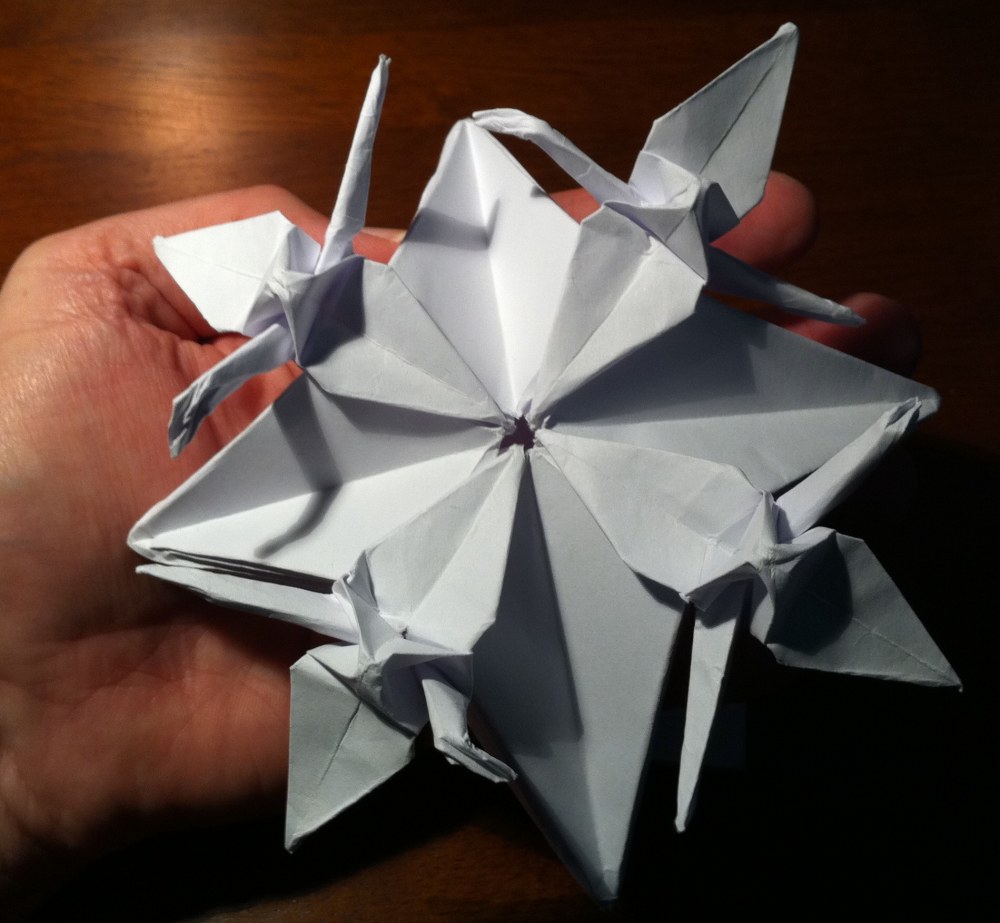 Imagine there’s no heaven, it’s easy if you try
No people below us, above it’s only sky
Imagine all the people
Living for today

Imagine there’s no countries, it isn’t hard to do
No need to kill or die for and no religions too
Imagine all the people
Living life in peace

You may say I’m a dreamer
But I’m not the only one
Take my hand and join us
And the world will live, will live as one
John Lennon, “Imagine”.

Now in my quest to fold 365 models, one a day for a whole year, it seems like I have been doing this forever already. Not having an infinite amount of time, I thought I wold fold an INFINITY in paper: 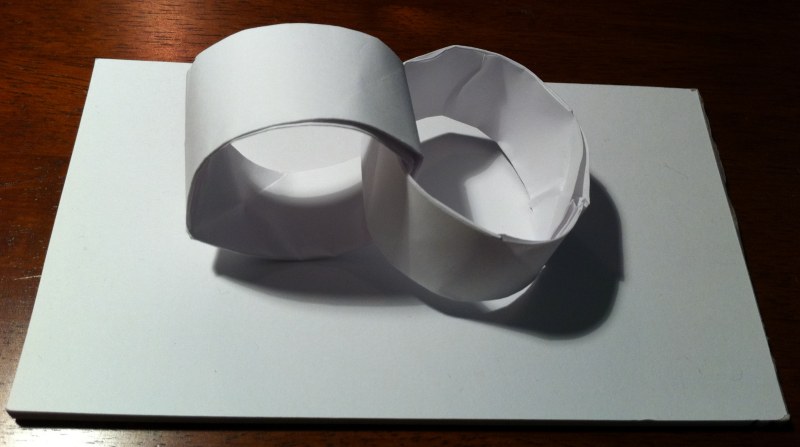 this is a rather ingenious pair of interlocking rings, the whole of which (hole … a ring joke there, lol) was folded from a single square, no cuts, no glue.

This ingenious fold is from Jeremy Shafers book “Origami to Astonish and Amuse” and is the first step towards achieving a snarly fold that features EIGHT rings (again, from ONE piece of paper) 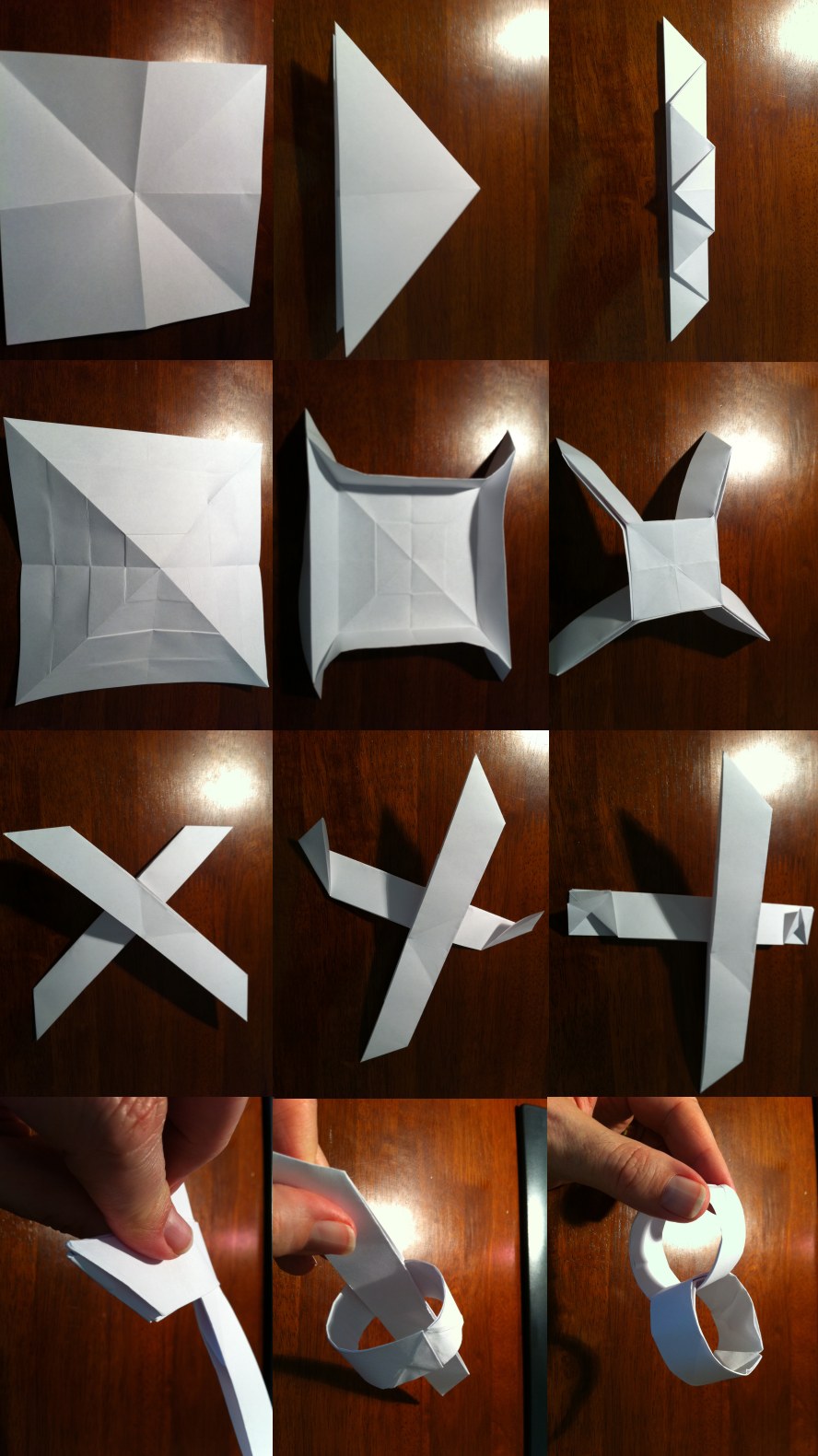 A lovely accordion fold and some tidy end pleating and presto, an infinity symbol which I think is splendid. Even the wife did not believe it was only one sheet until I unfolded it and proved it was.

When I first saw this model I knew I had to fold it: 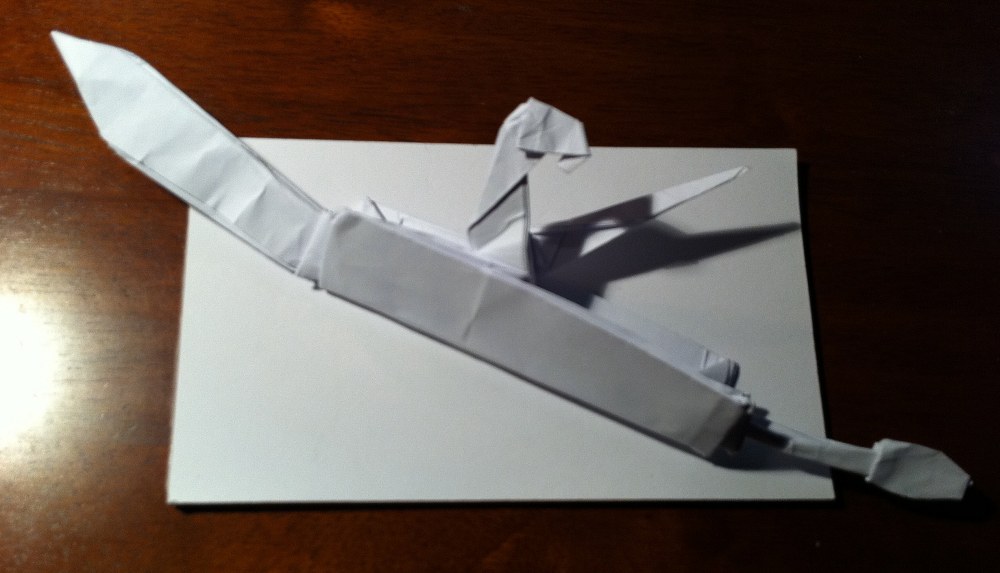 The very idea of a FUNCTIONING Swiss Army Knife seemed undelievable but here it is – Blade, Awl, Bottle Opener and Screwdriver all that folds away much the same as the metal one does – very neat. 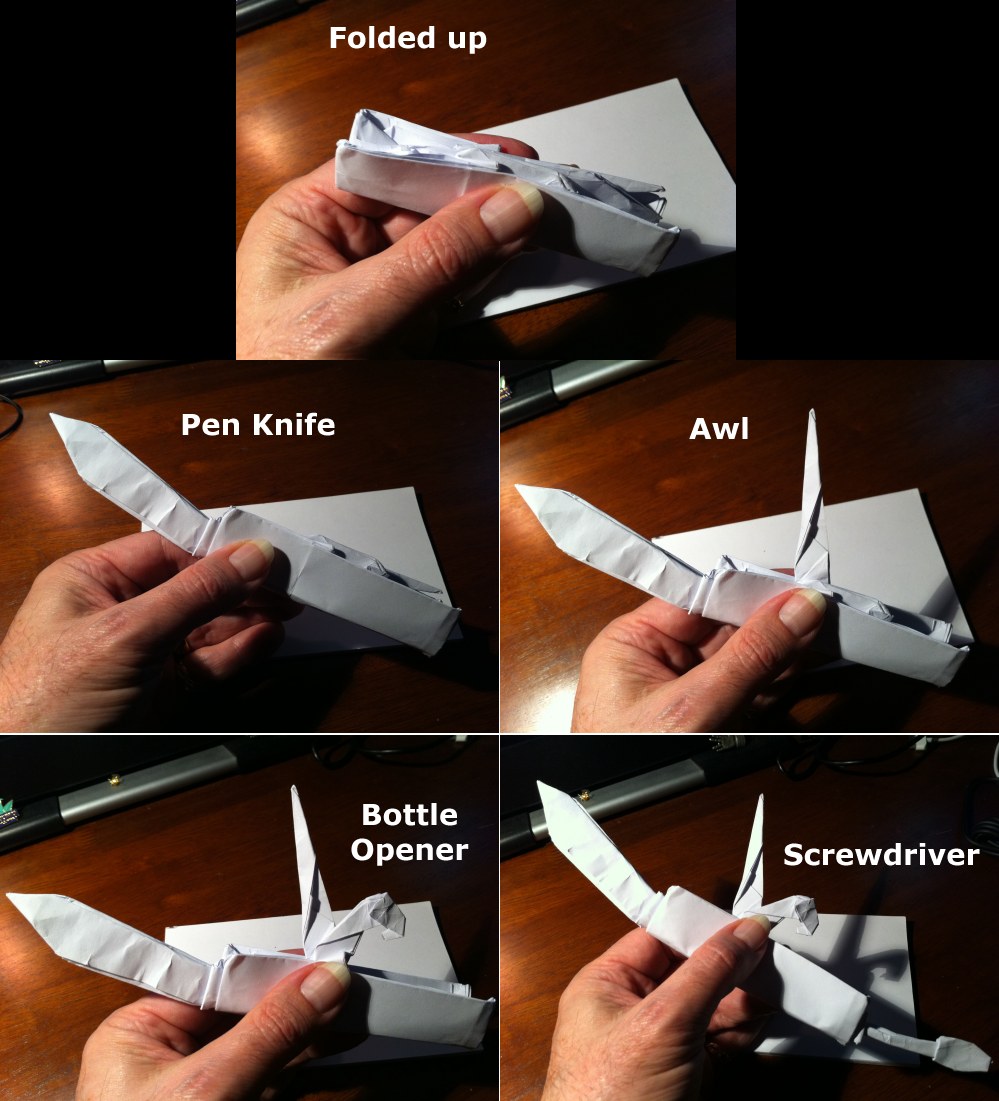 A relatively simple fold in the end – some thick layers and the hinges are difficult for copy paper, but I really like this model – a masterpiece of design. 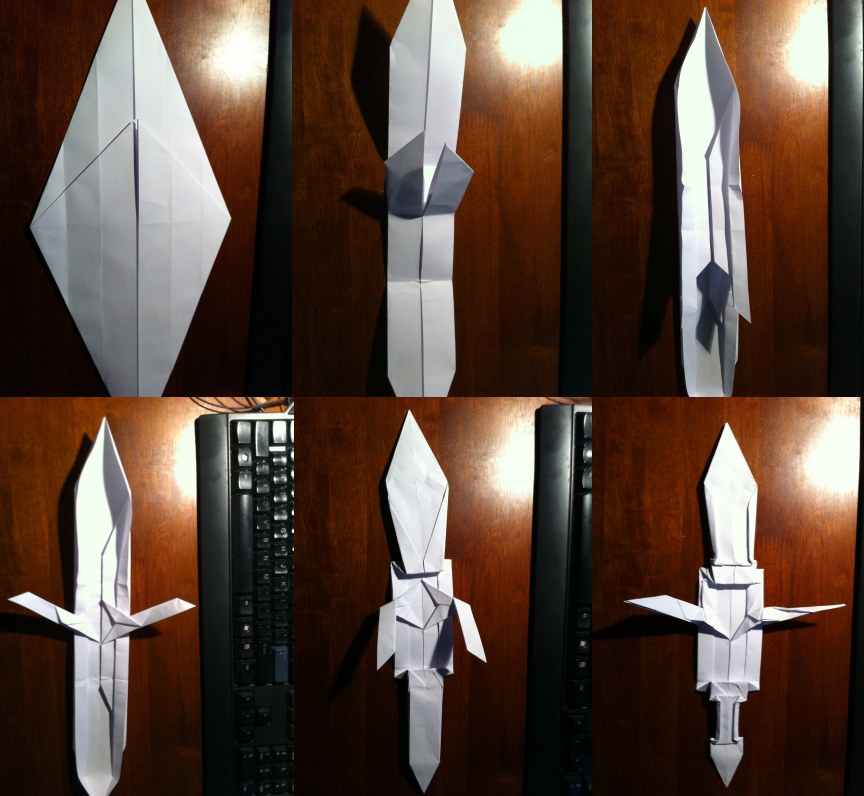 Jeremy Shafer’s “Orgiami to Astonish and Amuse” is an amazing collection of everyday objects folded from paper, a book I can see myself returning to again and again.

You may applaud now, I am so chuffed it worked out so nice.

..Space, the final frontier. These are the journeys of the Starship Enterprise as she continues her 5 year mission … 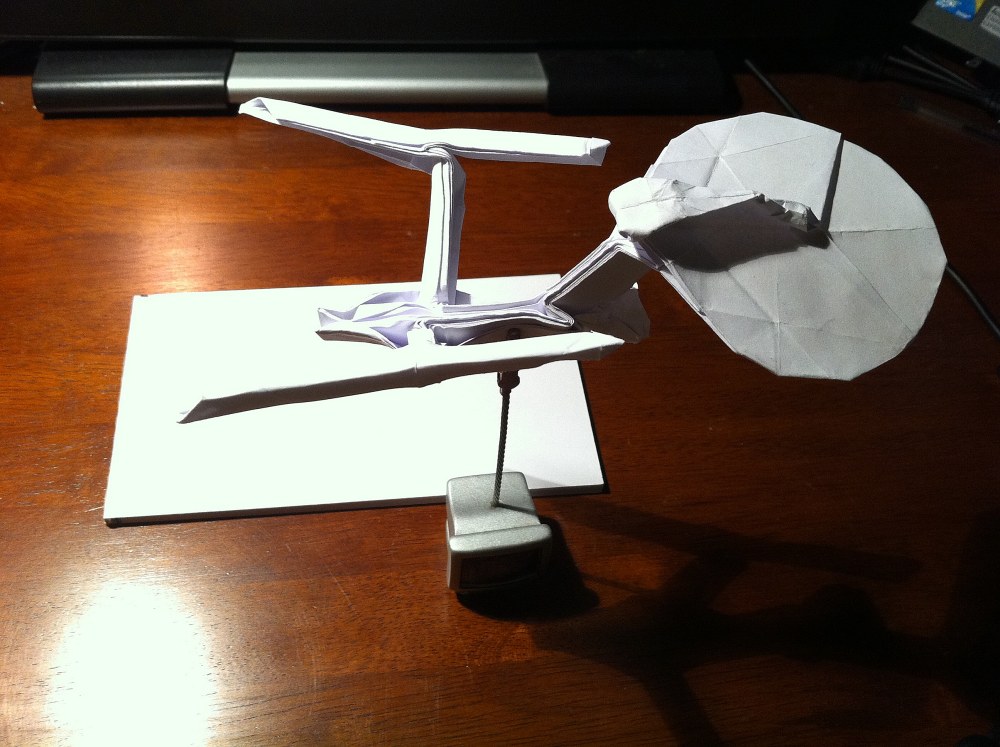 Talk about “boldly going where no copy paper has been before”, this delightful little model is the result of wrestling an A3-cut square into something that is 17cm saucer to nacelle. 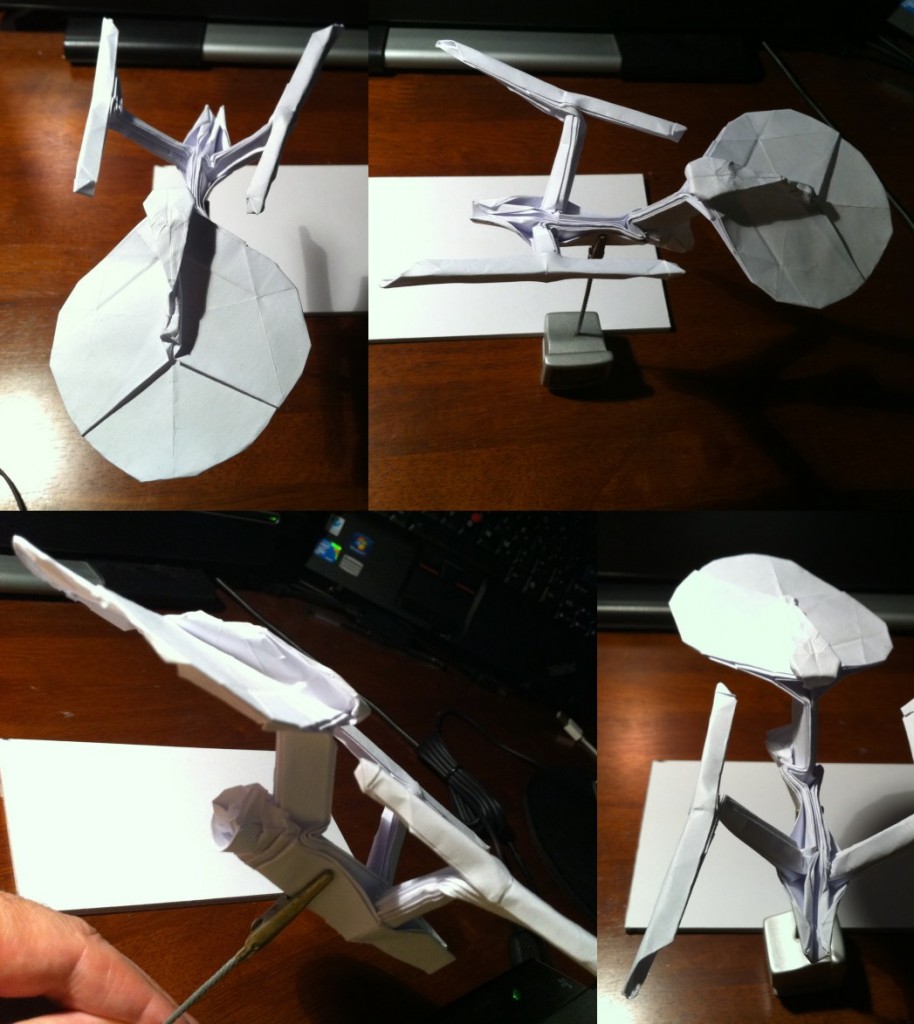 I really enjoyed torturing the paper to make this model, although paper fatigue and the sheer thicknesses in places caused it’s “structural integrity” to be compromised. I am pleased that it is relatively complete – it has a bridge rather vulnerably perched atop a nice saucer, 2 engineering marvels in nacelles attached rather nicely to the main hull, even a main deflector dish – so cool. 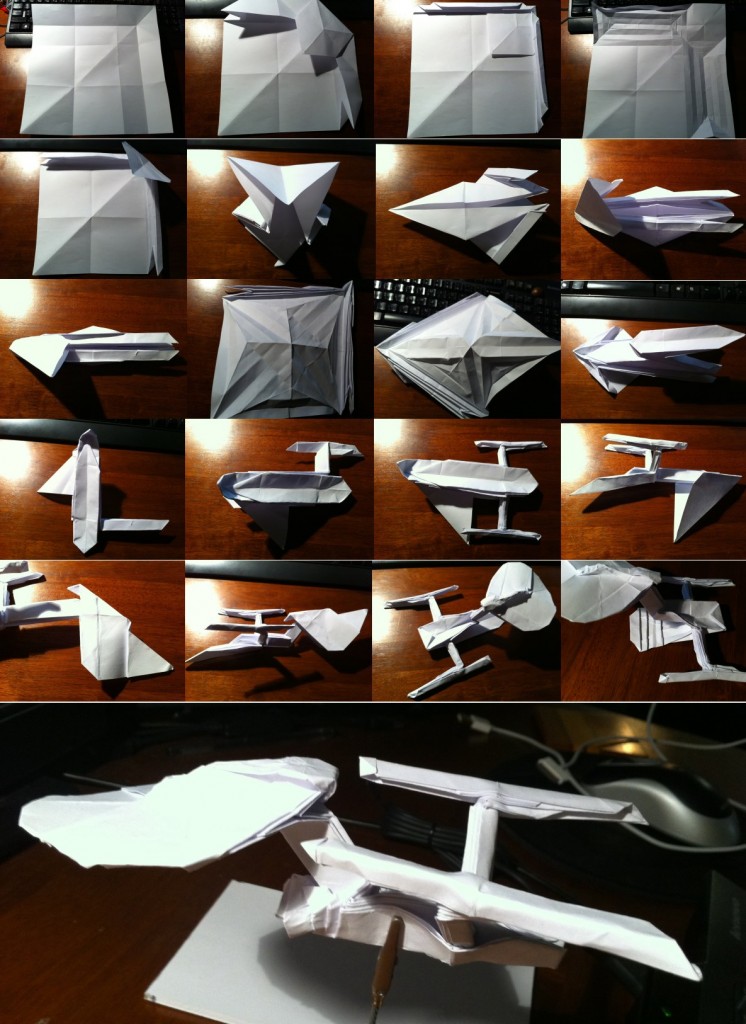 Why an “Enterprise”? Well, my mate and I finished BSG and will, tomorrow night, start the Original Star Trek episodes (Kirk, Spock etc) – both of us are healthily obsessed with all things Trek (we have seen it all, I used to even be able to speak Klingon!). I look forward to our time exploring sci fi so …. two to beam up Mr Scott…