There are many bears out there in the origami design community, and I have folded most of them: 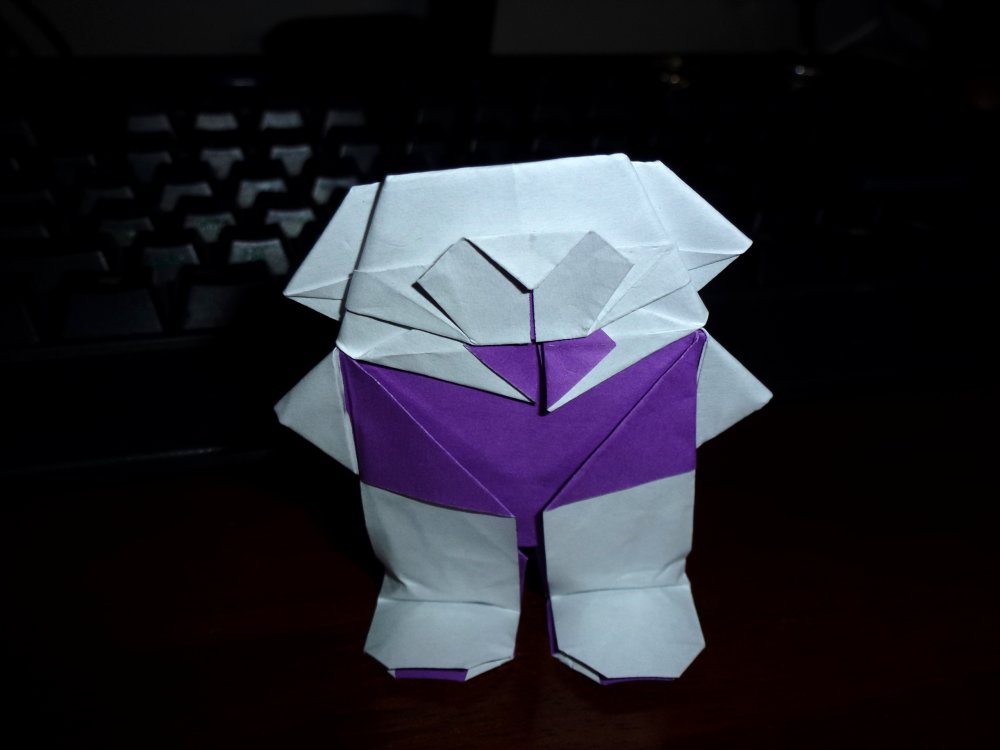 This is Robyn Glynn’s “Teddy”, a charming bi-color fold that looks cuddly and seems quite poseable. END_OF_DOCUMENT_TOKEN_TO_BE_REPLACED

Anyone who knows me realizes the terror I experience when visiting the dentist: 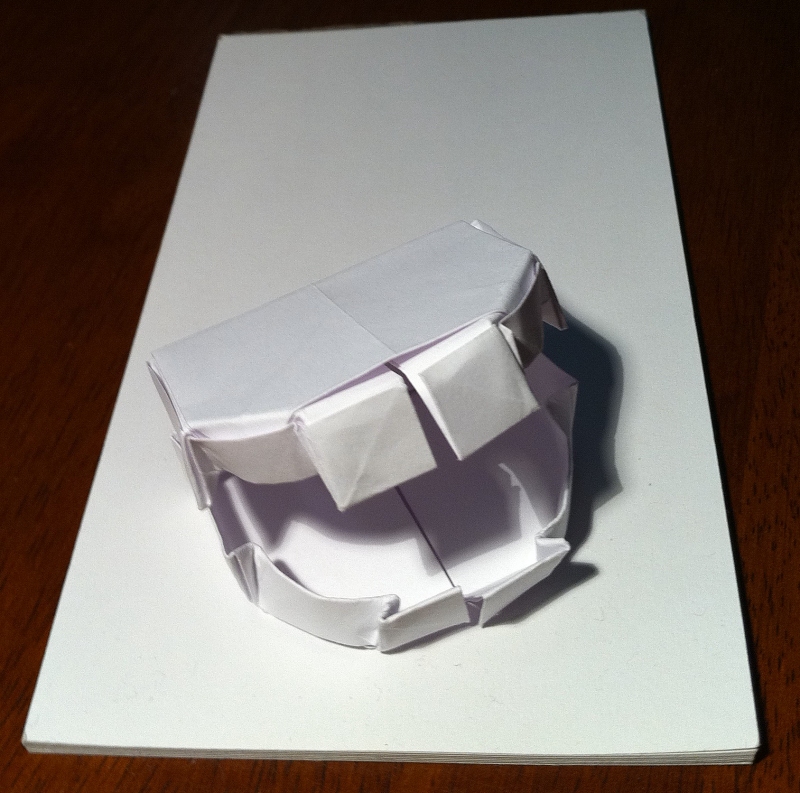 Don’t get me wrong, our dentist is awesome, and very aware that I have an irrational fear that I cannot control when being worked on. 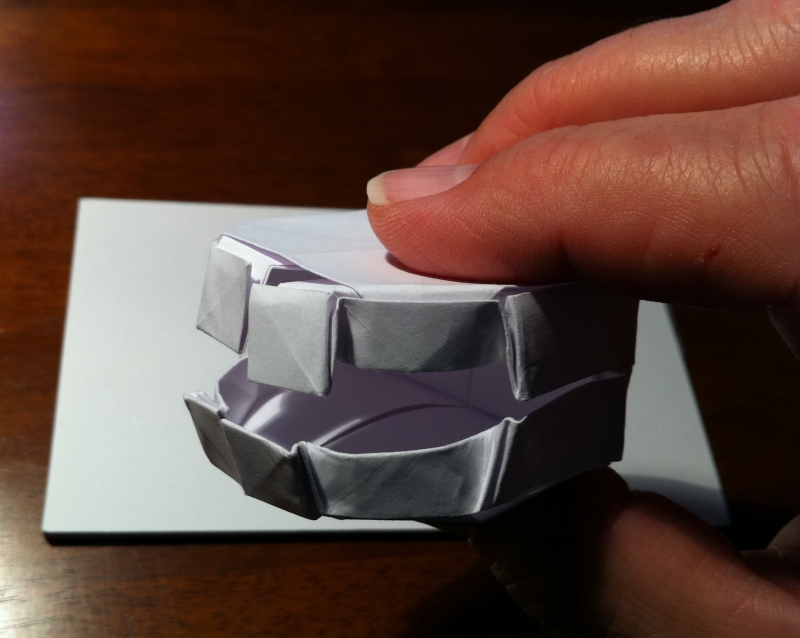 A red frog (chewy lolly) was the latest culprit, taking away most of a huge filling on one of my molars so today I face a molar re-build and thought origami teeth – there’s an idea.

This delightful model is a compact little box pleating exercise designed by Robin Glynn. When folded from an A4 cut square they turn out essentially lifesize, although they have much fewer teeth than a real set, they are demonstrative of form and look a lot like those chattering teeth wind-up toys sold in joke shops.

Quite happy with this as a first fold.

Ahoy me Hearties, so today be International Talk Like A Pirate Day, so I looked for somethin’ suitably Piratical t’ fold in celebration. 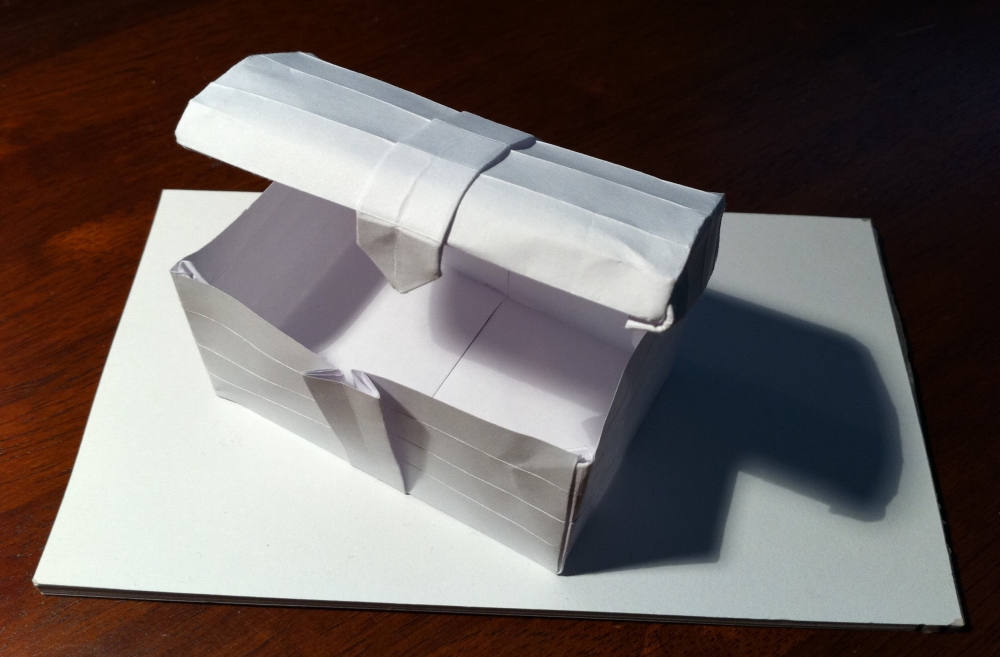 I decided on a Treasure Chest by Robyn Glynn, a lovely folded and pleated folly that looks like it be made o’ planks o’ wood, has a curved top and a rather nice clasp latch. 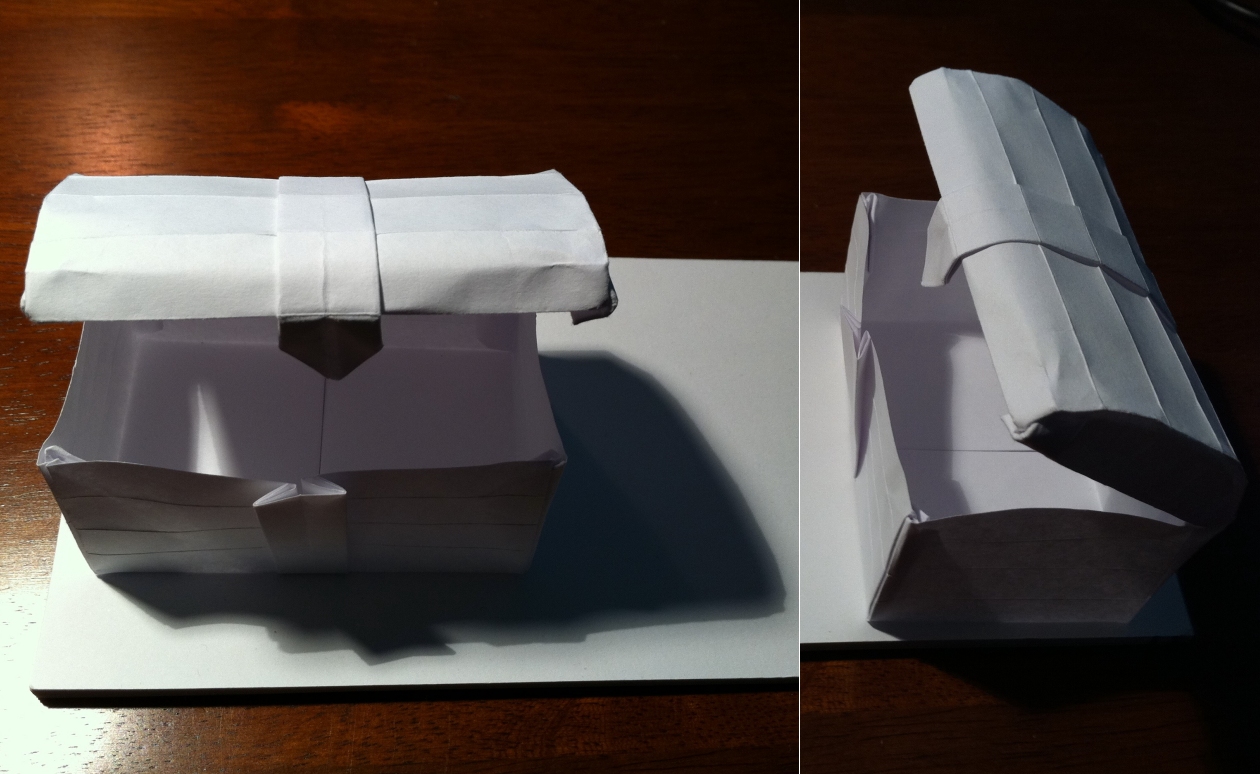 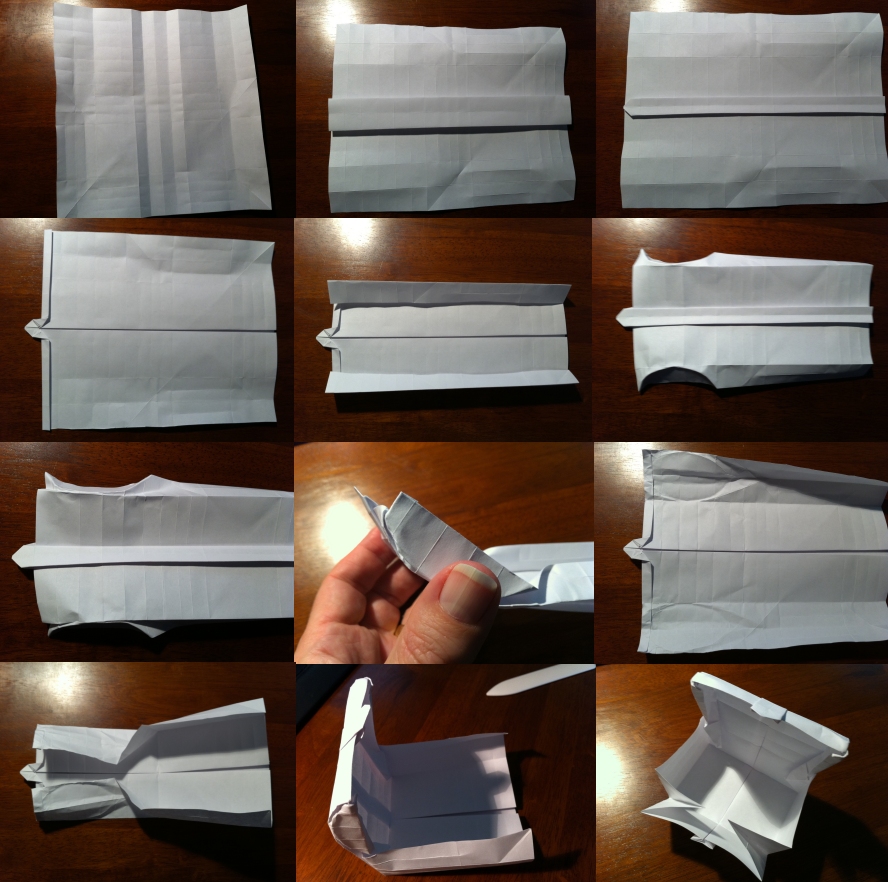 I be quite happy with this as a first fold, and hope more than just me celebrate this important day by talkin’ like a Pirate.

Although I be not a great jack tar, I could quite fancy a wooden leg, eye patch and parrot and imagine t’ tricorner hat and overcoat would go down a treat.

Vive le France – it is Bastille Day and I ask what is more quintessentially French than “Le Tour Eiffel”: 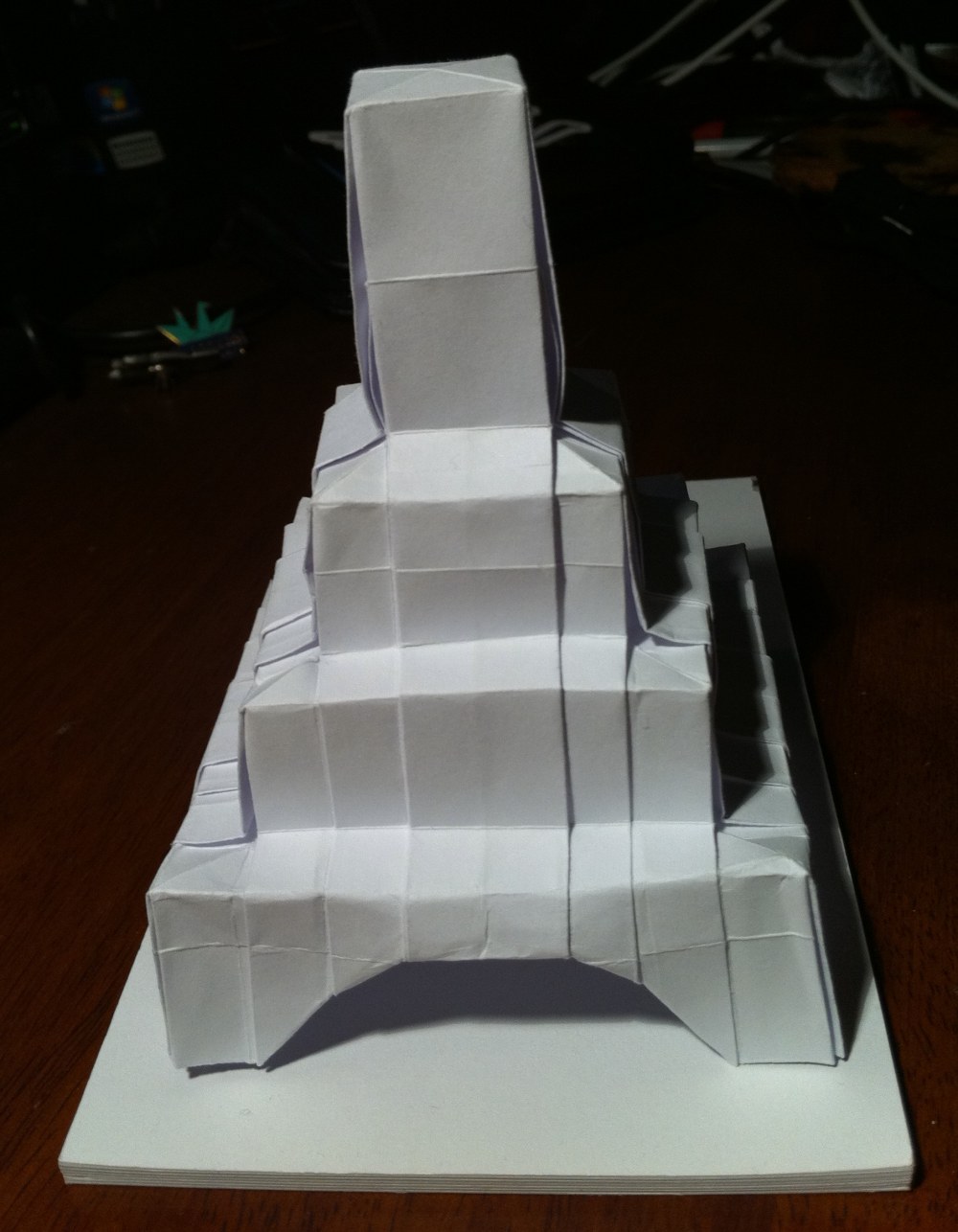 I resisted the obvious froggy references and went straight for a cultural landmark – albeit a fairly ugly bit of schrapnel left over from a world expo. 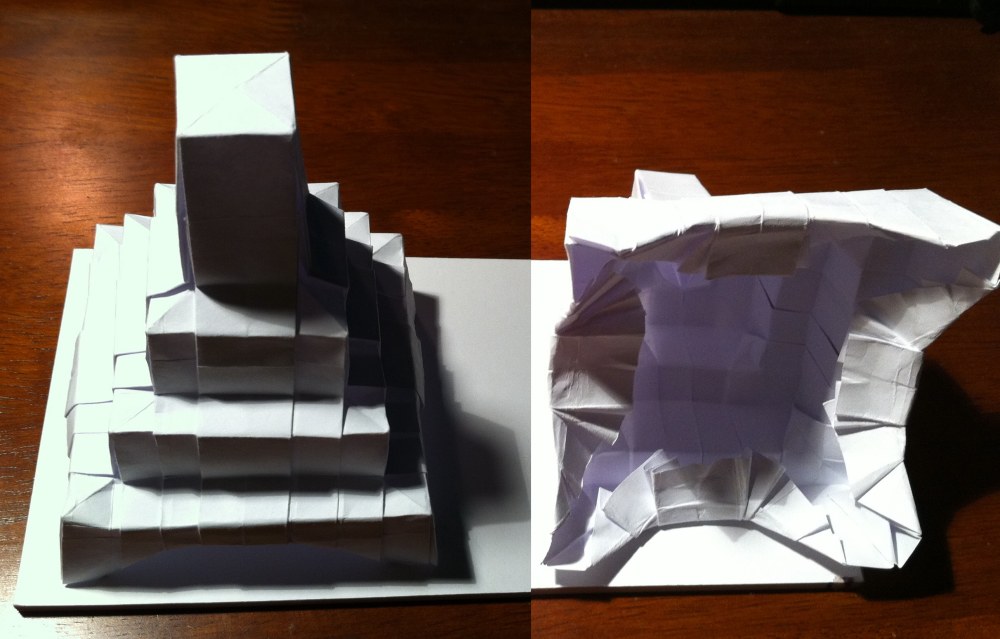 I like this model – partly because I folded it via a general principle rather than an exact pattern and the technique of “benching” the model is useful for other things I have planned. 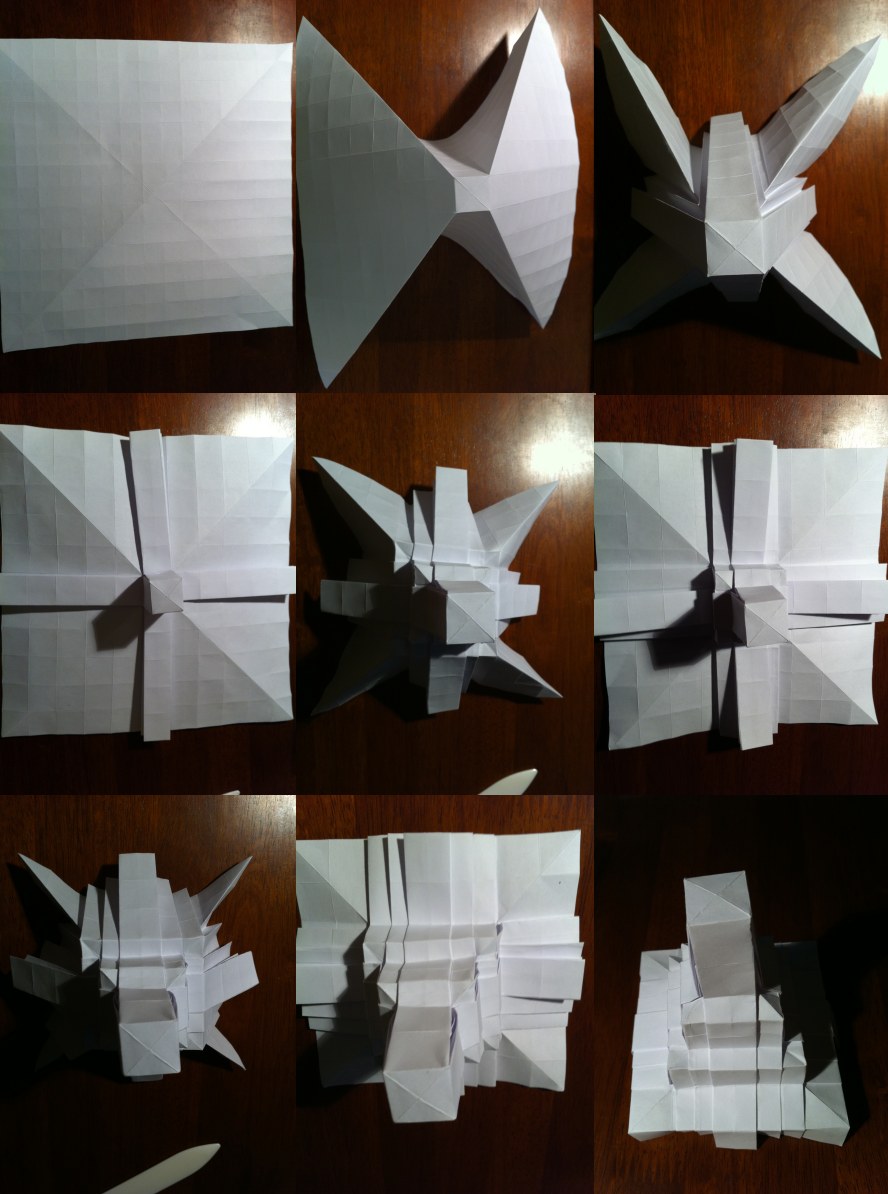 Surprisingly, this model is quite rigid after the bottom layer is scalloped – must make another one for the French department, although I am disappointed they did not offer crouissant or other baked treats to celebrate.

I find it interesting that time seems to pass so much slower when you are doing something you really do not enjoy: 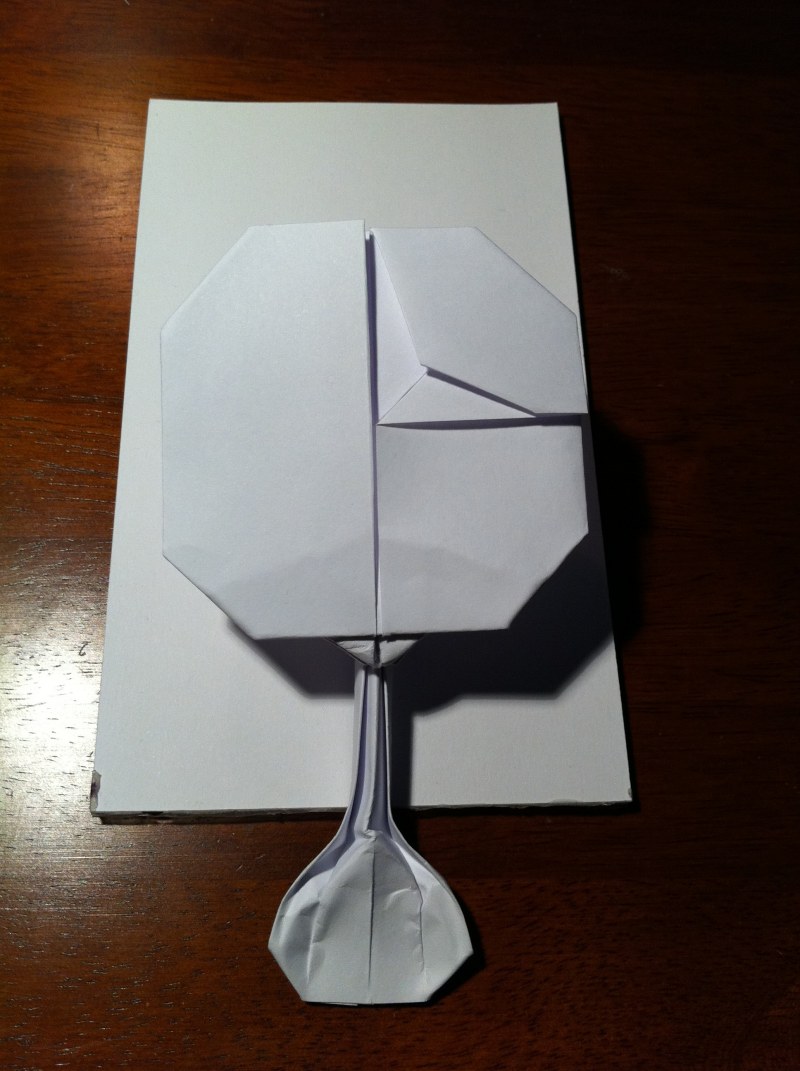 My “Theory of Temporal Perception” explains that time like that which crawls past during an exam supervision, say, is noticed minute by minute, tick by tock. 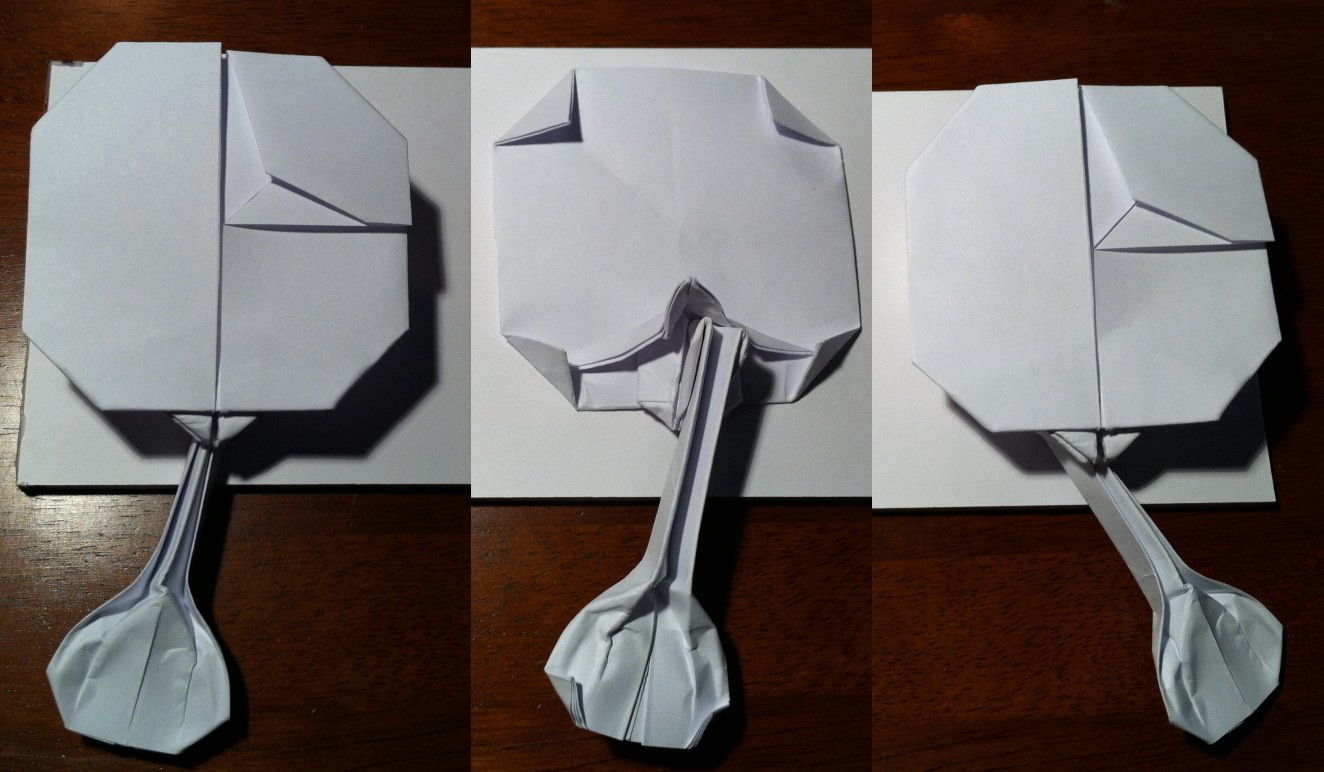 This is a cute action model – it moves – the pendulum swings and actually makes a “tick tock” sound due to an ingenious rabbit-ear fold at the back creating a flipping flap. 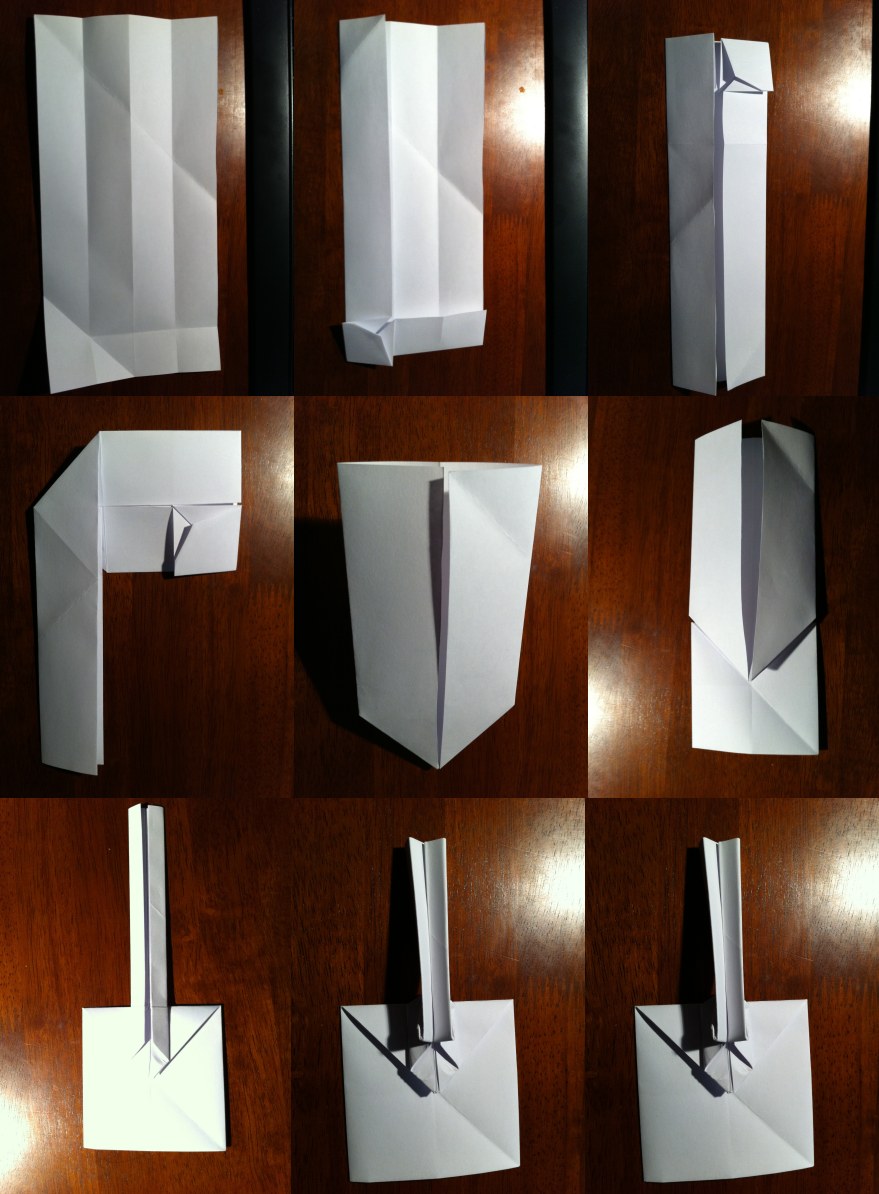 There is much to like about this model, including the fact that the time on the clock is 3PM, meaning it is time ot start mid-semester holidays – woo!

Now one of the things I enjoy playing, with my mate, is an old-school game called “Dogfight” – great fun of plane v plane between German and American allied forces, set in WWI, when fair game and honour existed between aces. One of the game elements is a cannon: 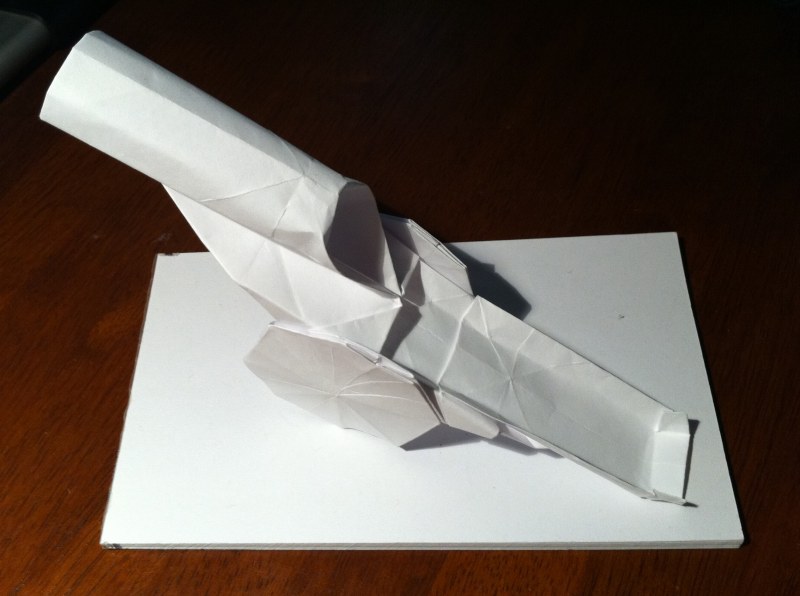 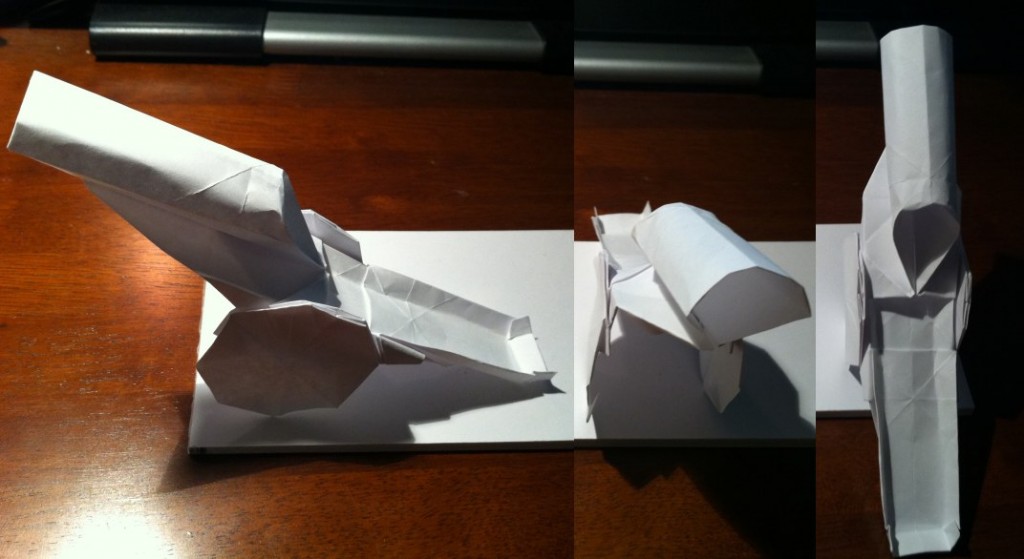 I quite like the wheels, although they are formed at step 15 with the most hilarious instruction “Fold as shown, you might find this easier if you had folded these at step 2” – hahahaha, not. The designer is right, it would have been easier, but a headsup might have been prudent…? 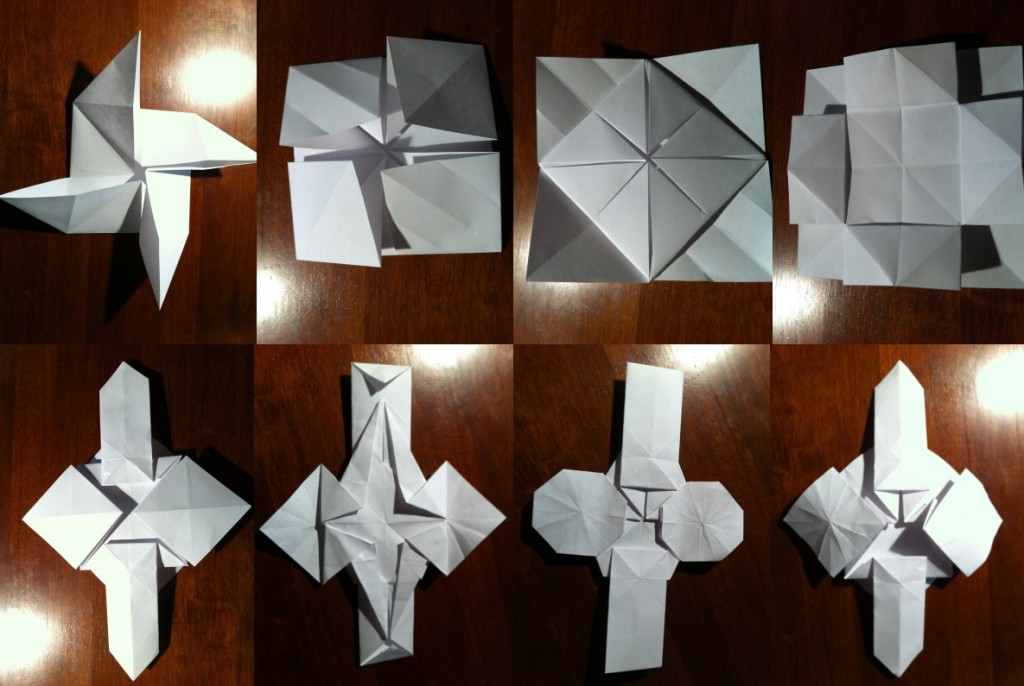 Nice figruative model – I could see some little ones of these on a game board, but they would get hella-fiddly in places (might do a test on the limit of smallnicity I can fold them) … Dang, now I need a biplane (think Red Baron) …

Now the date is a word-play on a classic Star Wars line, and what better to celebrate Star Wars Day than with C3P0: 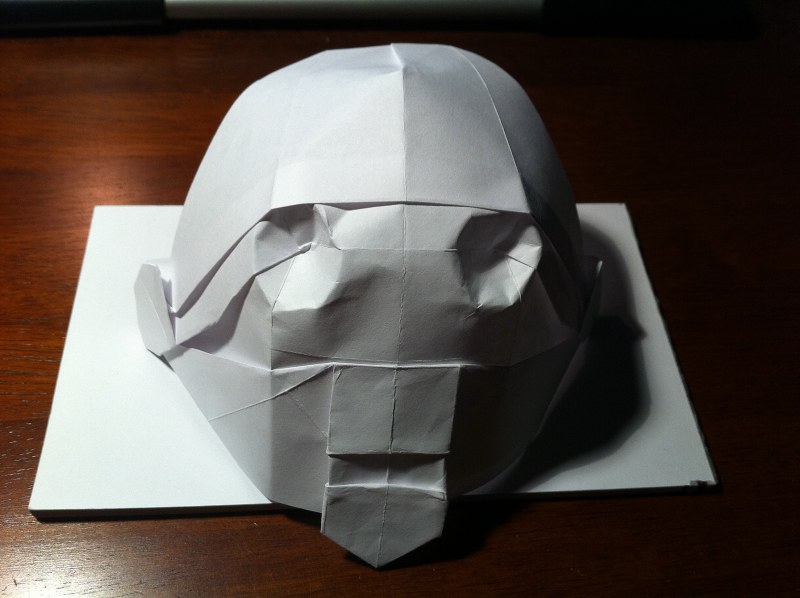 This is a mask – even from an A4 sheet it is quite large – I Hazard to suggest that an A3 sheet would make one that was wearable. Fairly happy with it – simple fold, busy day.

Thanks for the suggestion Simon, this little “Reaper” does not look so grim: 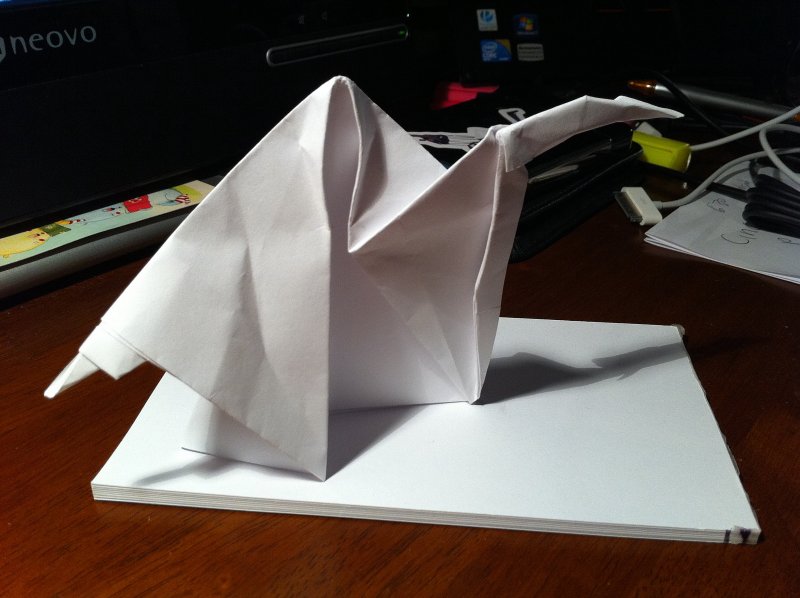 A relatively simple fold, few features, suggestive of form, I like it. Looks a little like a Dementor from Harry Potter’s world (except it is carrying a worrying scythe).

Why a Grim Reaper? One computer dies, another is built to replace it, the process is not always painless – you get that.