Sad but true, baby harp seals up until fairly recently were hunted for their pelts – the fashion industry could not get enough of them: 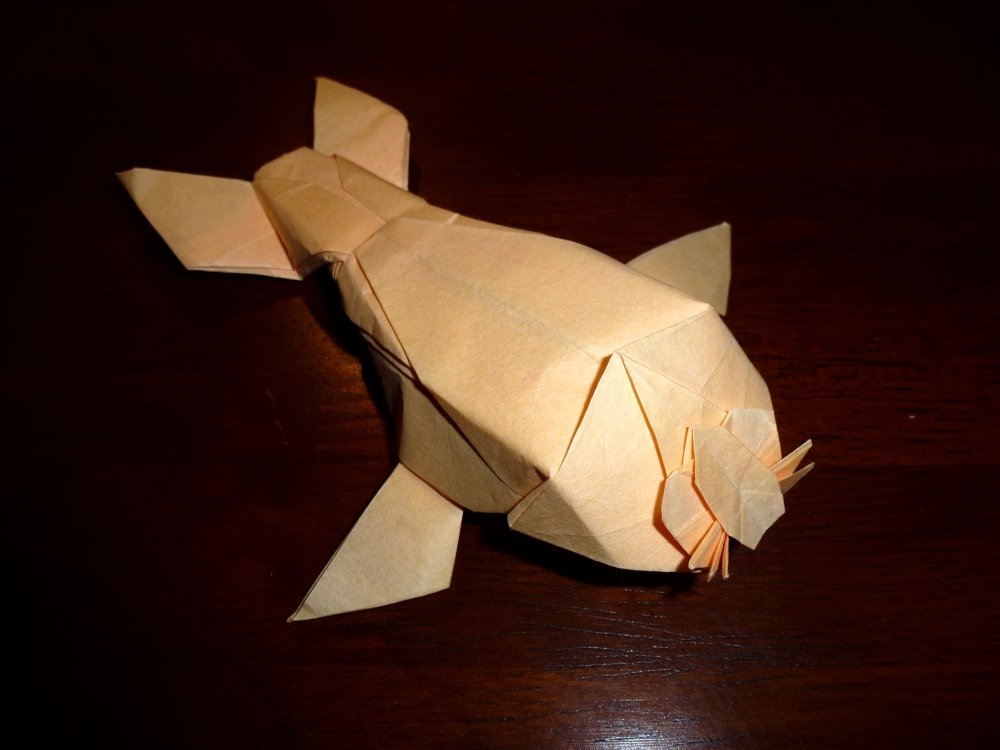 While seal hunting still continues today for food, oil and pelts, the clubbing of baby harp seals has largely been banned. END_OF_DOCUMENT_TOKEN_TO_BE_REPLACED

Leafing through “Origami Sequence” by Quentin Trollip, I am struck by the quality and quantity of amazing designs packed into that book, and the range of skills his models brings to the table. 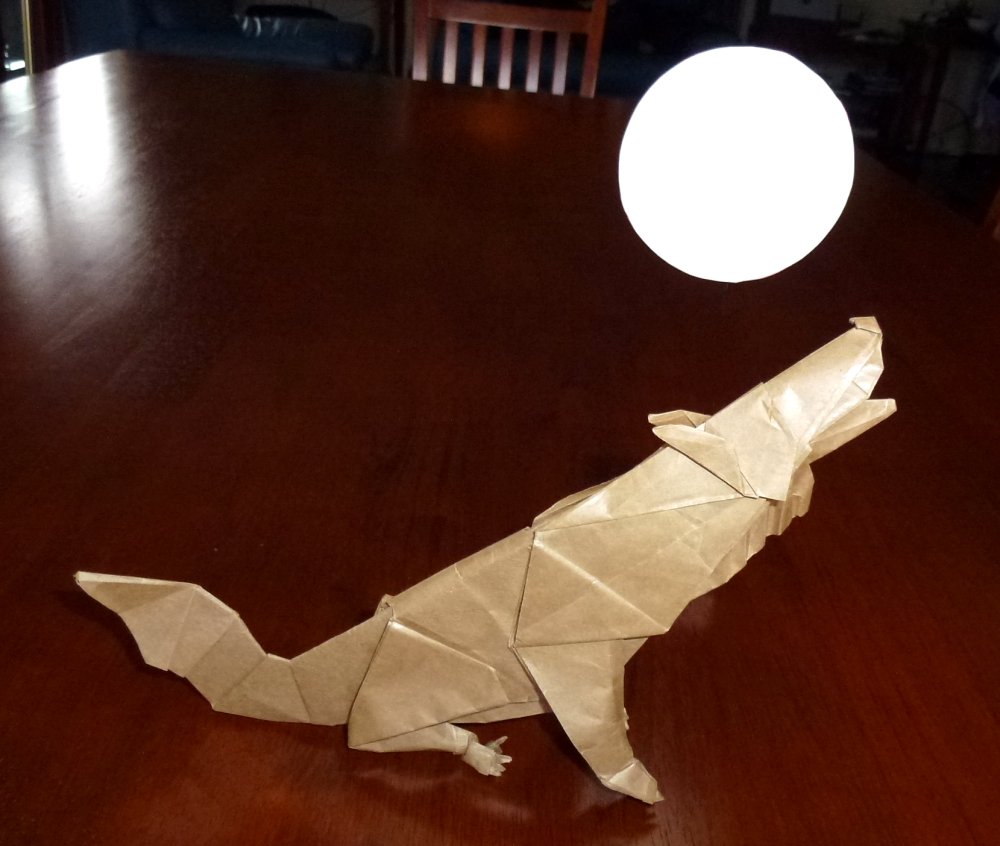 There is this house, at work, that has a Timber Wolf as their house mascot, so I have been on the look out for one to fold (I assumed someone would ask me to have a go, that never really happened, so I did it anyway). 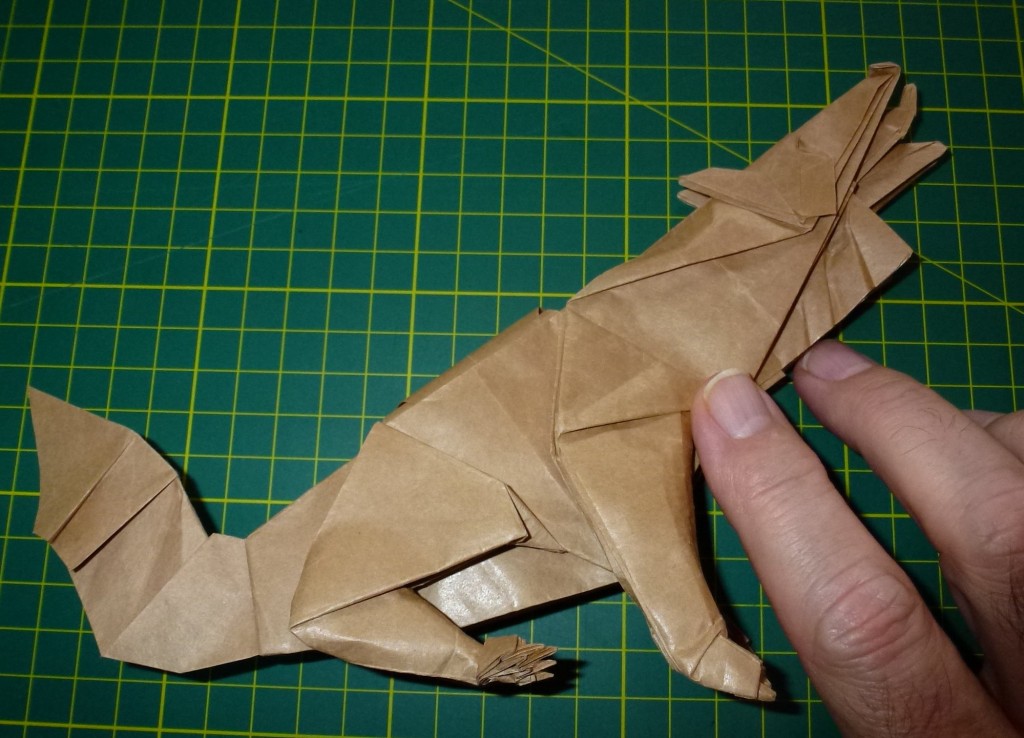 This wolf is clearly howling, there is much movement and drama inherent in the pose, and I placed a “moon” within howling distance in some shots because it seemed to need it. END_OF_DOCUMENT_TOKEN_TO_BE_REPLACED

Pressed with something to make and tired and shagged out after a busy week I stumbled across this model and thought I would give it a go: 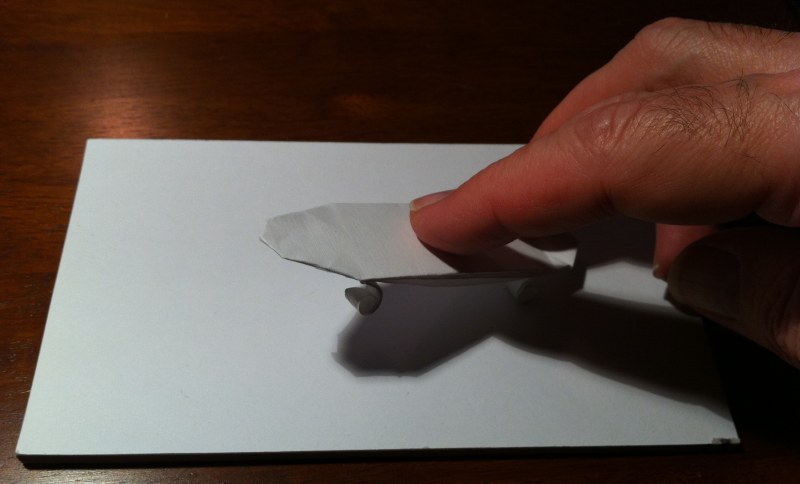 I have seen kids using a mini-skateboard (tech deck I think they are called) and am amazed that this model is a fairly complete imitation of one, including wheels, trucks and deck. 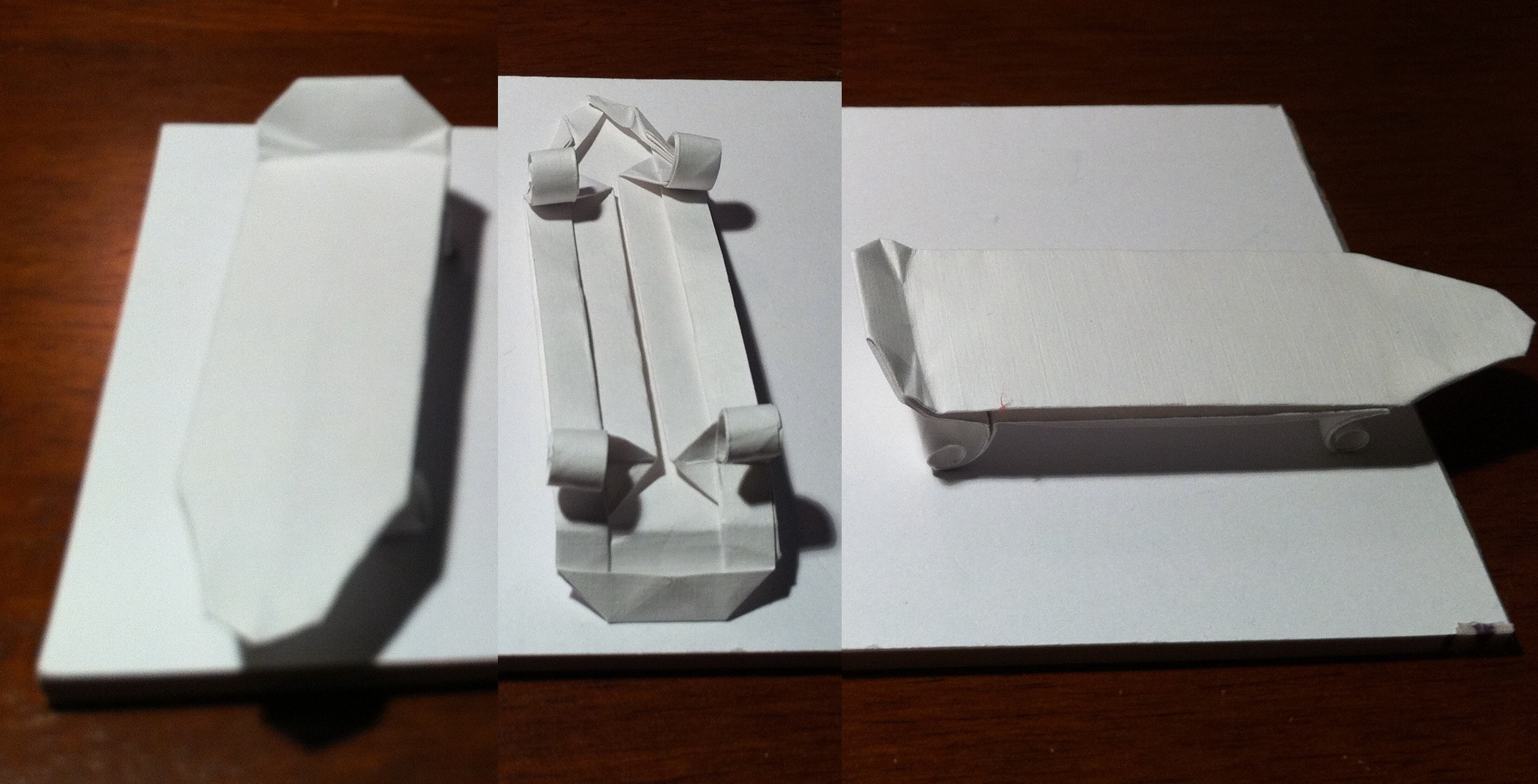 Originally (the dev shots) I used a square from an A4 page – this resulted in a deck that was nearly 20cm long, so re-made it (the other shots) with a 1/4 A4 square and it is perfect in scale 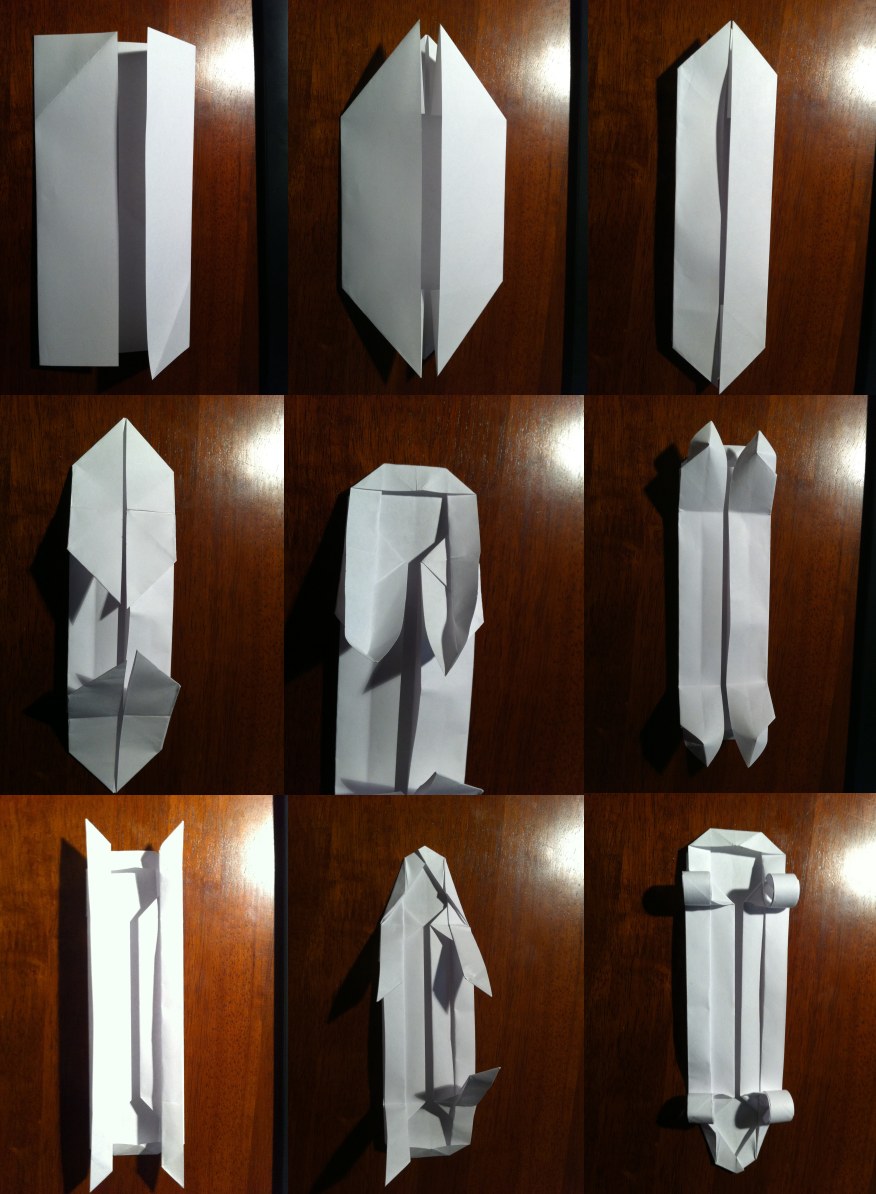 I like how the wheels are made from curls of flaps formed from side sinks, it is fairly faithful – nice work Mr Trollip. You should definitely try this – you will impress the teens no end with you leet paper skills.

When we were growing up, we had Basset hounds – lovely droopy, pendulous eared dogs. Mum had one called Rebecka, my sister had one called Cleo. Now I am not a “dog person” but these old ladies were different, they were family: 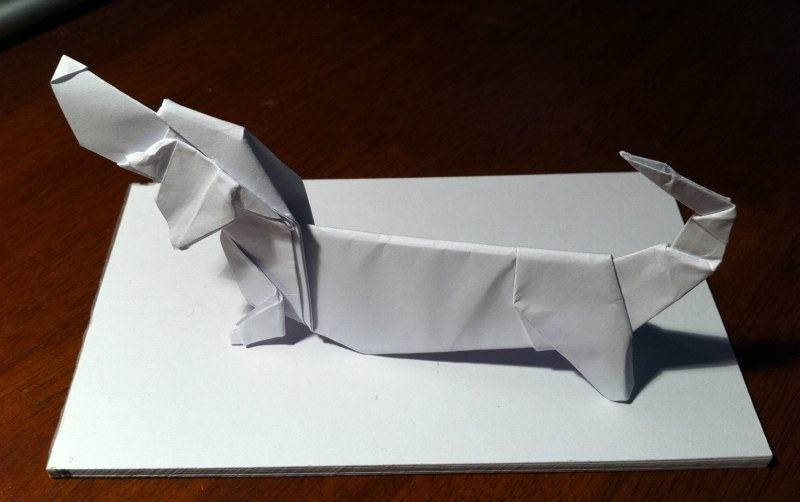 It is Mum’s Birthday ***HAPPY BIRTHDAY MUM*** She is on the other side of the planet right now (in Cornwall) so a few weeks back I folded her a basset with similar colouring to Rebecka (bought a brindle cow print from a closing down craft shop nearby): 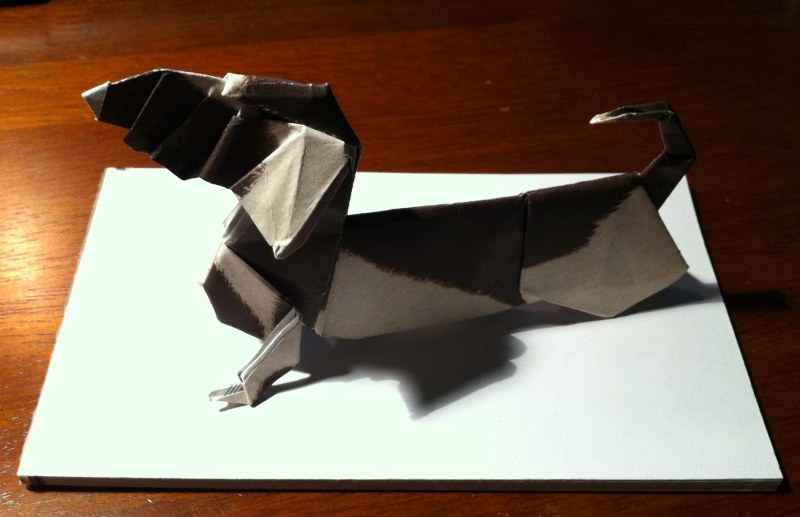 Hoping the post gets it to her on time, this model fills me with fond memories, companionship, childhood, feelings of home. Anyone who has had a Basset knows they are just like people. 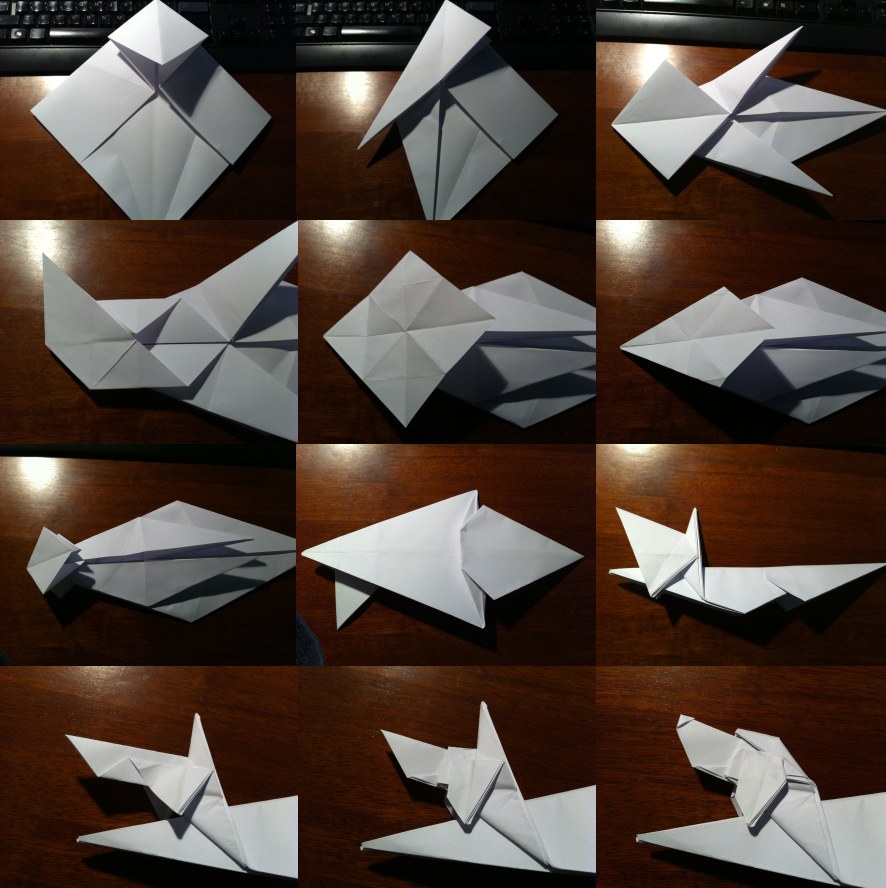 I would like to say the cow-print paper was easy to fold but it wasn’t, tough work, my hands ached afterward, but it folded flat so it could be enveloped and sent off in the post amidst a card.

You can try this one for yourself – relatively straight forward, being tidy at the beginning makes for a better model later on.

June is a busy month for birthdays – must be something in the water around this time of year (or rather 9 months earlier :P)