Castles and Battles and Towers, oh my!

Our Saturday was spent exploring Stirling and the famous battles that happened nearby. When you look around the city there are two dominant landmarks visible from nearly everywhere – Stirling Castle and The Wallace Monument. These and more were on the agenda.

William Wallace is a Scottish hero. Famously (or should I say infamously) romanticised by Mel Gibson with the blue face and the kilt (years before kilts became common place or battle makeup was even a thing), the real Wallace is a divisive character even today. Credited with being instrumental in the defeat of the English at the battle of Stirling Bridge. The area, in ancient times was really wild and crossing the River Forth was difficult – controlling the bridge effectively controlled England’s access to most of Scotland so although it all seems a bit like a storm in a teacup to us now, at the time it was a formative moment for the Scotts and their continued fight for independence. 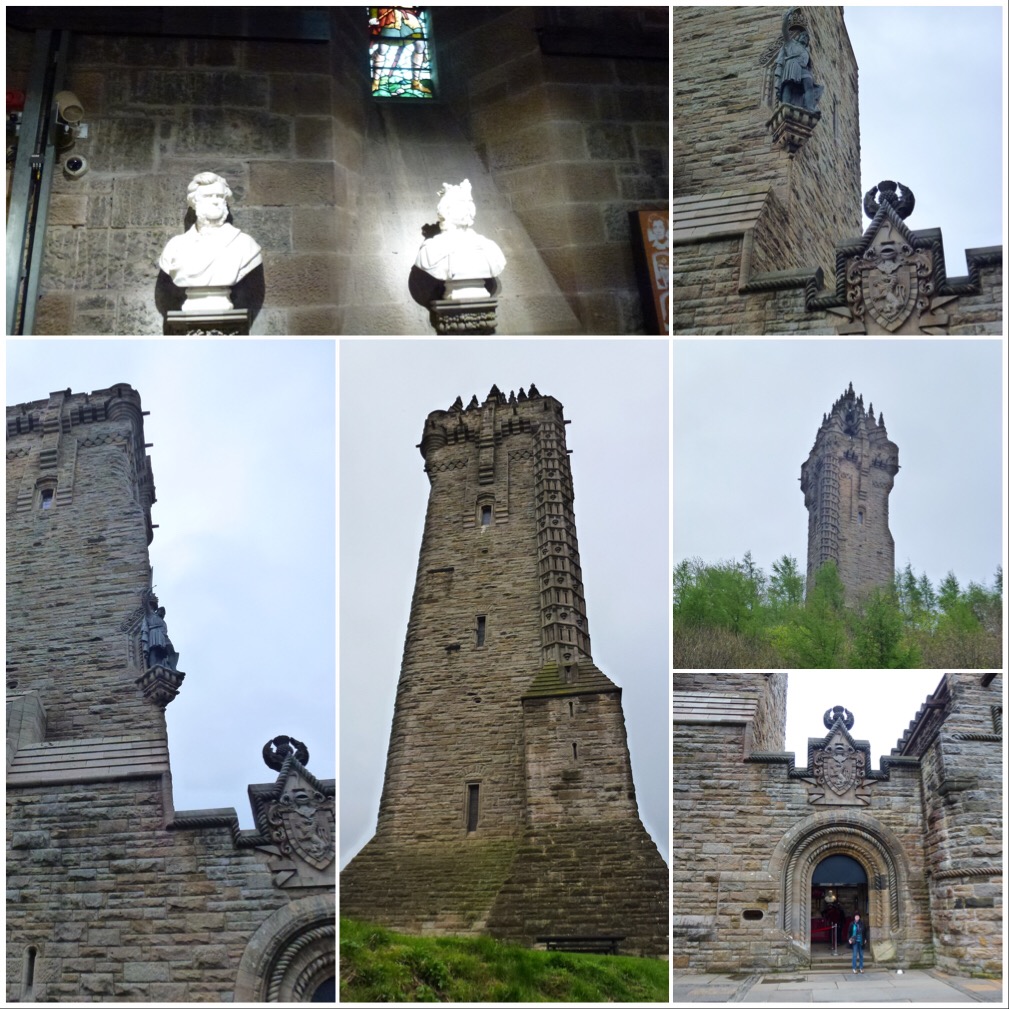 To honour Wallace, an astonishing monument was erected on a knoll overlooking the city. It, at least in part, closely resembles a towerhouse in that there is a terrifying spiral staircase up between the 4 double-height rooms stacked on top of each other. We got most of the way up, saw 3 of the 4 rooms and their displays before a terrifying fire alarm sounded and everyone had to evacuate. Imagine a couple of dozen people, all trudging down a never-ending twisty stair at pace and that was the end of our visit. 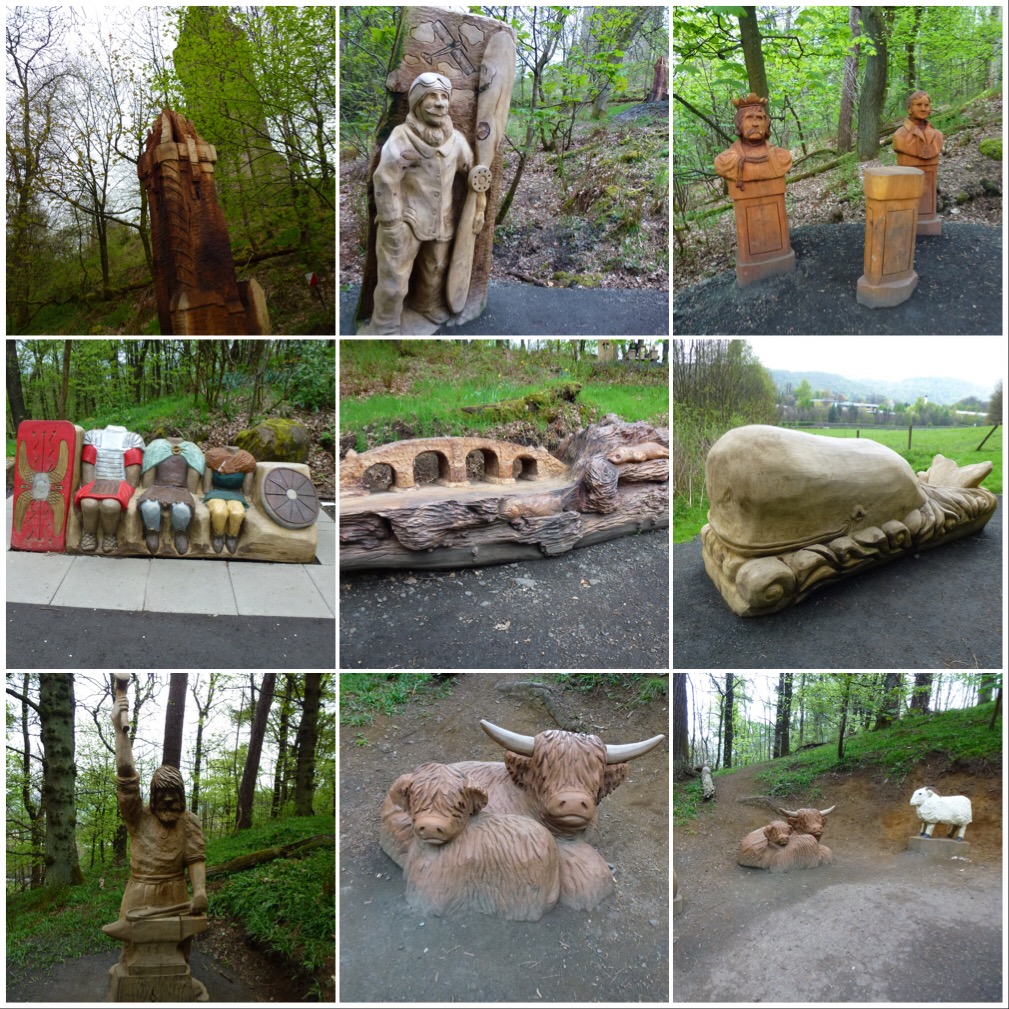 From our vantage point we saw the fire engine cross the city and navigate the maze of one way streets that lead up to the monument, and the firemen arrive to do the climb to confirm the false alarm but we ran out of time so walked back down to the car without seeing the final top level. On the way down we saw a delightful collection of sculptures commissioned to highlight aspects of Scottish culture and history – cool.

Keen to explore battles more, we motored to the Whins of Milton for the Battle of Bannockburn 3D experience. We arrived a little early but had time for tea and scone. We had no real idea what to expect but were so impressed with our guide/orator who took us through a series of rooms. First up we watched a pair of 3D movies explaining both sides of the tension, seems the Scots and the English were at odds, like that has never happened … ever. Anyways, two armies faced off against each other. 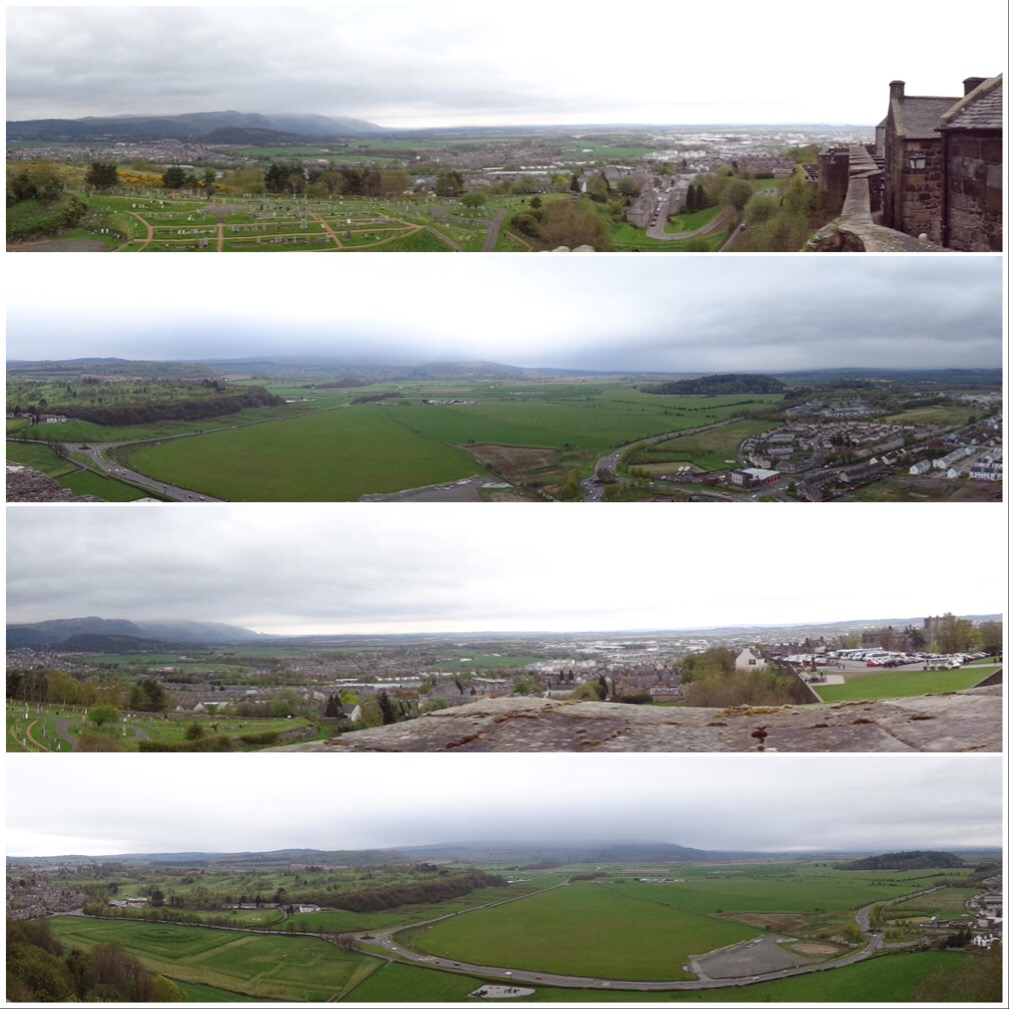 The second room was awesome, 4 surround full length surround 3D screens that showed us military actions, charges and angles of the massacre – victory for the Scots. The next room was the battle room where we sat around a gaming table which was a relief map of the actual battlefield, with projectors above projecting game and topographic data and we played a game to see if we could change history- so very cool.interestingly there are ways the battle could have been changed, but I think our orator guide was really good at manipulating us to make equally disastrous military decisions and in our game, the Scots won again.

The final room contained a 3D movie explaining the consequences of the battle and subsequent events. I was astounded how significant internationally this and the one at Stirling Bridge were.

We then had a Scottish Picnic (because it was cold and blowy and we had originally planned to eat outdoors but … Scotland. Back on the road again, we headed to Stirling Castle to see what we could see. 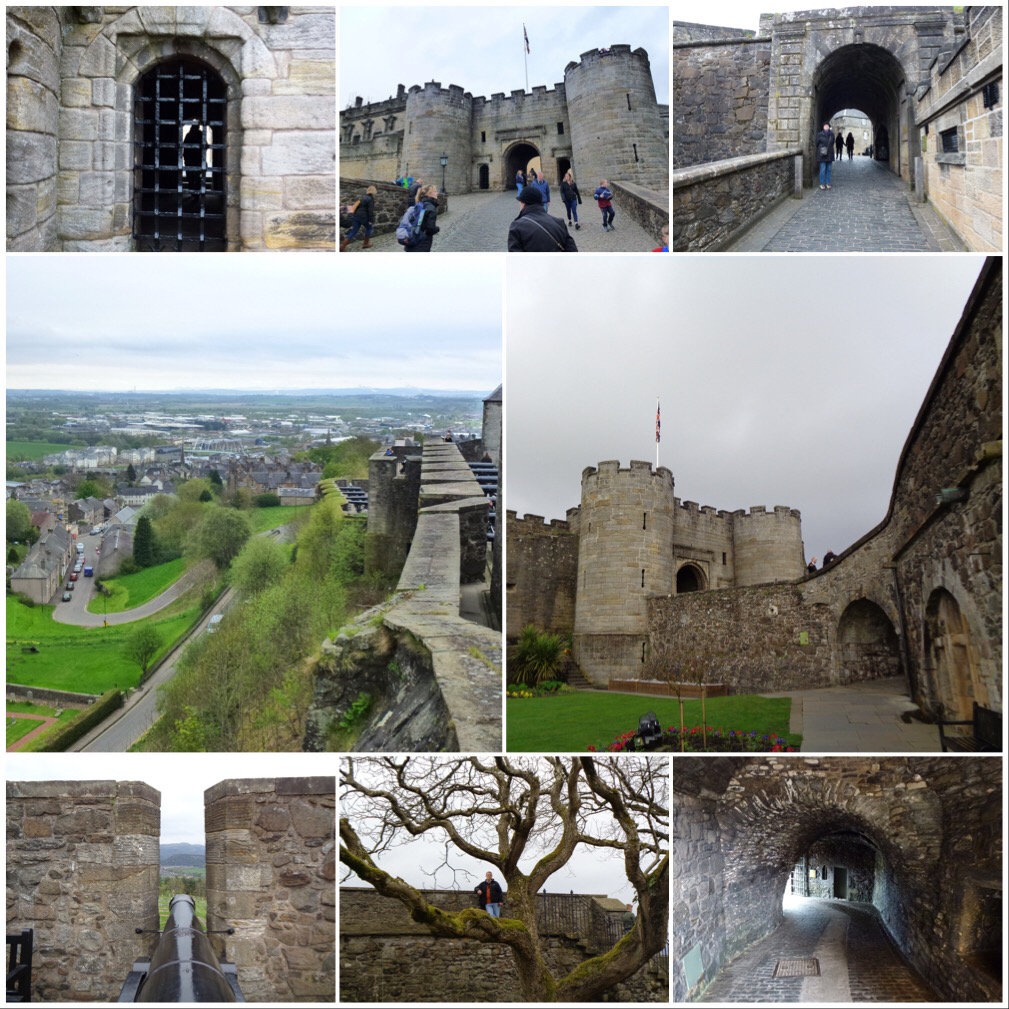 This castle was really interesting and so well set up for visitors. We were in time for a guided tour and our guide was fantastic, her accent alone was adorable but she took us on an hour long walk through the various building phases of the castle, pointed out interesting features and explained how the building actually worked as a royal residence. 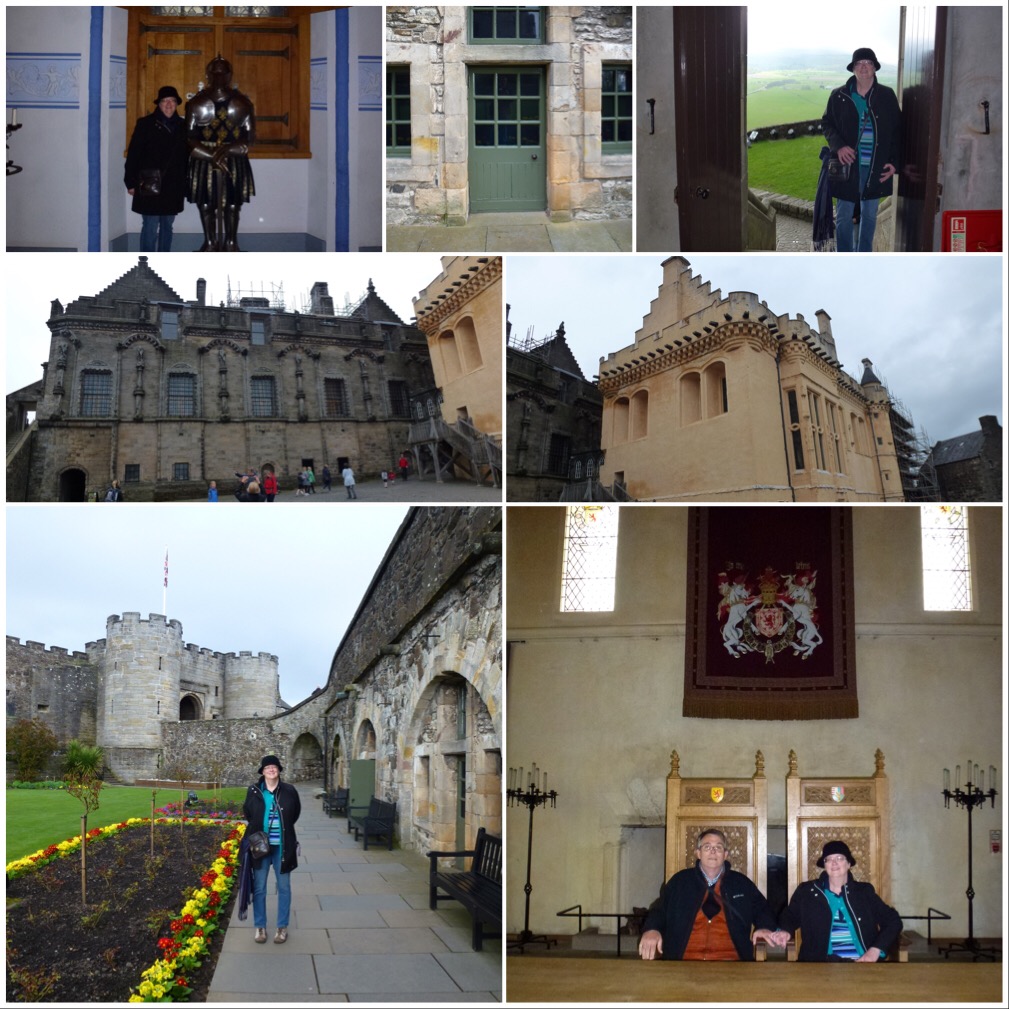 We wandered in awe through lushly decorated rooms, amazing architecture and really old bits. I think this was my favourite castle of this trip, possibly because of the quality of the guide but also because she made it possible to imagine living there. 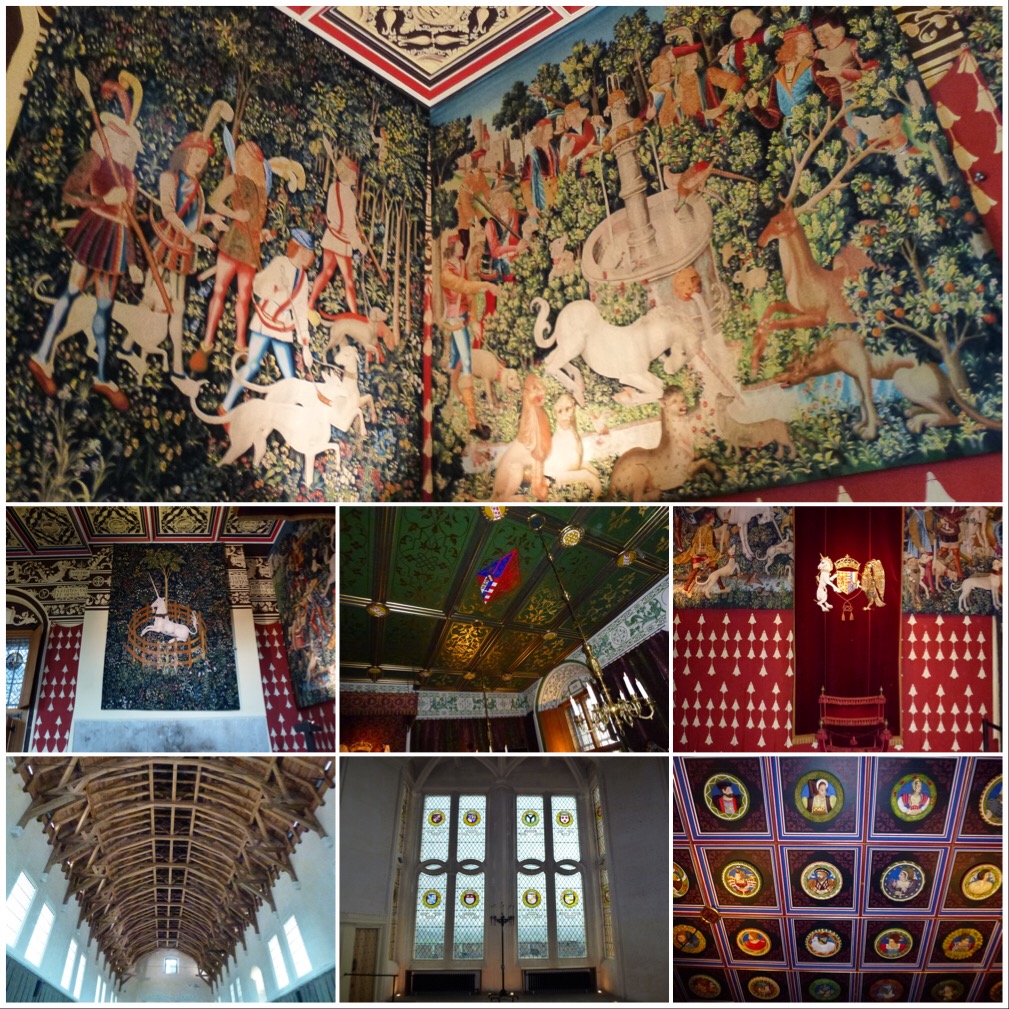 Some of the art contained in the castle was just awesome, the tapestries that were oddly unicorn-focussed (seems they still believed in them) had been lovingly re-woven and the display on how they were recreated was amazing.  The wood carvings and surface decoration werealso  really striking. The level of decoration in the King and Queens appartments was amazing. Time really flew, we must have been there for over 3 hours.

Thank you Stirling, we had a blast.