An early start (but time enough for a “full Welsh” breakfast thanks to our early rising host), we bid farewell to the wonderful walled town of Conwy and to Wales entirely as we wended our way towards Yorkshire.

These long drive days get me thinking about roadways and main motorways in particular – they are so featureless and really, you could be anywhere on the planet and they are much the same. Getting from point A to point B is important but it is boring driving really with no real clue about the place or people visible from them.

UK roads are well signposted and fairly in-confusing, every road has a code, “M” for major highways, “A” roads for (usually) dual carriage ways and arterials, “B” roads for minor roads down to goat tracks, each with a number. I can imagine the ‘lost’ Monty Python sketch involving incessantly boring motorists discussing routes:

[in broad Yorkshire accents]Aye lad, you could go that way, but my pick would be to avoid ‘t M2 and take junction 36 to ‘t A28, drive about 17 mile in direction of ‘Mill then turn onto B417 and drive south ’til layby then merge, second exit from ‘t roundabout onto A6 which leads down hill towards ‘t creek, cross at ford then carry on ‘t destination.
[other equally broad yorkshire accent] A28? We used ‘t dream of A28, when I were lad there were only B4528 south from there and we used to travel in open hay wagon if we were lucky ….

So long as you know where you are going, it is fairly easy driving although the 6 lanes of the M1 are a bit scary, thankfully we were traveling them when traffic was heavy but still fairly zipping along. An hour or so later, when school was out for this, the beginning of May “Bank Holiday” weekend, the M1 was a huge parking lot apparently according to a friend who had to travel it at that time.

We had a break and turned off the main drag for a lot of the journey (it is more interesting that way) and headed through the Peak District. I think it is called those cause it is hilly, but lots of hills, yet the name is singular …. Go figure. We drove to Fairholme Visitor Centre via Macclesfield and went on a charming ramble through the woods there 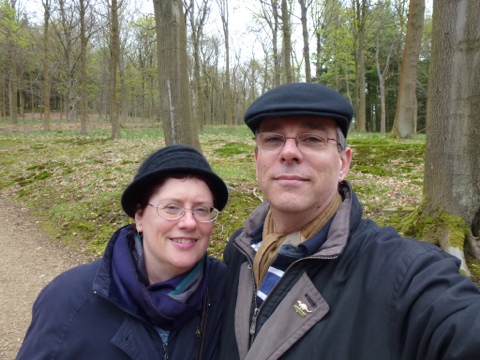 It was brisk (read fraking freezing) but lovely, we saw our first pheasant (live, not road kill, and in the wild) – such beautiful things. As we stopped and looked, the forest was indeed alive with birds, squirrels and sheep (lambing season is upon us so everywhere there are young lambs testing their legs, silvery cute and delicious).
Walked down to the Derwent reservoir, which was very picturesque 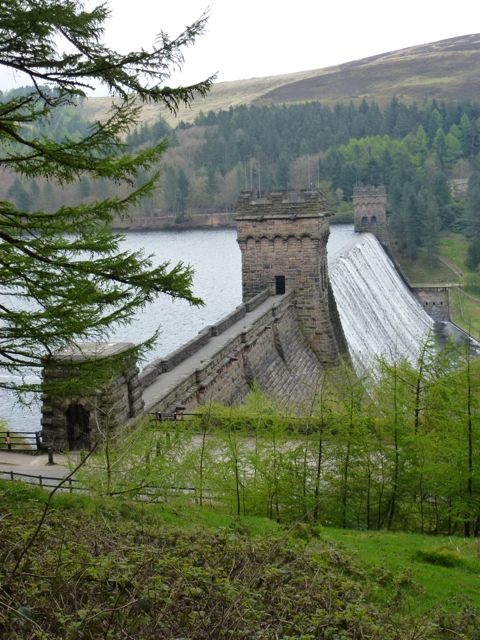 Reading the signs, it turns out this was the lake/dam that was used to practice dropping the bouncing bombs later featured in “Dambusters” raids. All very interesting. We turned to the visitors centre and had lunch (a couple of suet crust pies we bought from a much awarded Conwy butcher the day before) and fed scraps to the large herd/flock of ducks that had assembled. It is wrong to feed scraps of game and turkey pies to ducks – seemed vaguely ethically questionable but they did not care.

More driving afterwards, lots of it vanilla motorway when we turned off towards Harrogate, popped into the largest Sainsburys we have ever seen, small town-sized to do some grocery shopping (B&B living for the last little bit meant our larder needed refreshing for our 5 night stay in a self-catering farm cottage). 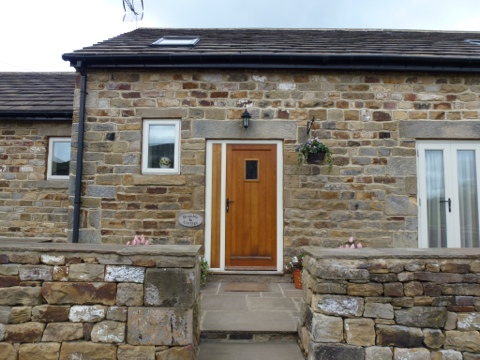 We arrived tired at Bramble Cottage, our digs for the next 5 nights. What a charmer, semi-detached, farm building conversion that is palatial – so much room to spread out, lovely kitchen and, we noticed outside, a resident Pheasant 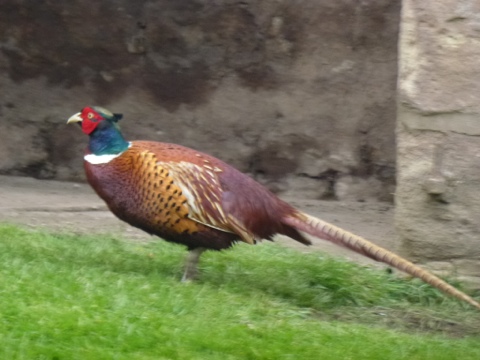 We settled in, unpacked (it is horrible living out of suitcases for extended periods of time), cooked dinner – bangers, mash and onion gravy, opened the wine, had fruit, tea, biscuits and before we knew it, the evening was over, sleep in time as tomorrow is a lazy start which I think we need.

As an aside, DAVE is a fun Telly channel, mostly available on free view throughout UK, lots of comedy and stupid stuff, just sayin’