Round the Rugged Rock the Wobbly White-Ffolk Walked

My last visit to Ayers rock was waaaay back in the 70’s when I was 18. Back then things were different – I was sound of body, weak of mind – these days I find myself increasingly visa versa. I was part of a student camping tour (probably more accurately labelled a “drinking tour”) and we climbed Ayers Rock before sun-up to watch the sun rise. 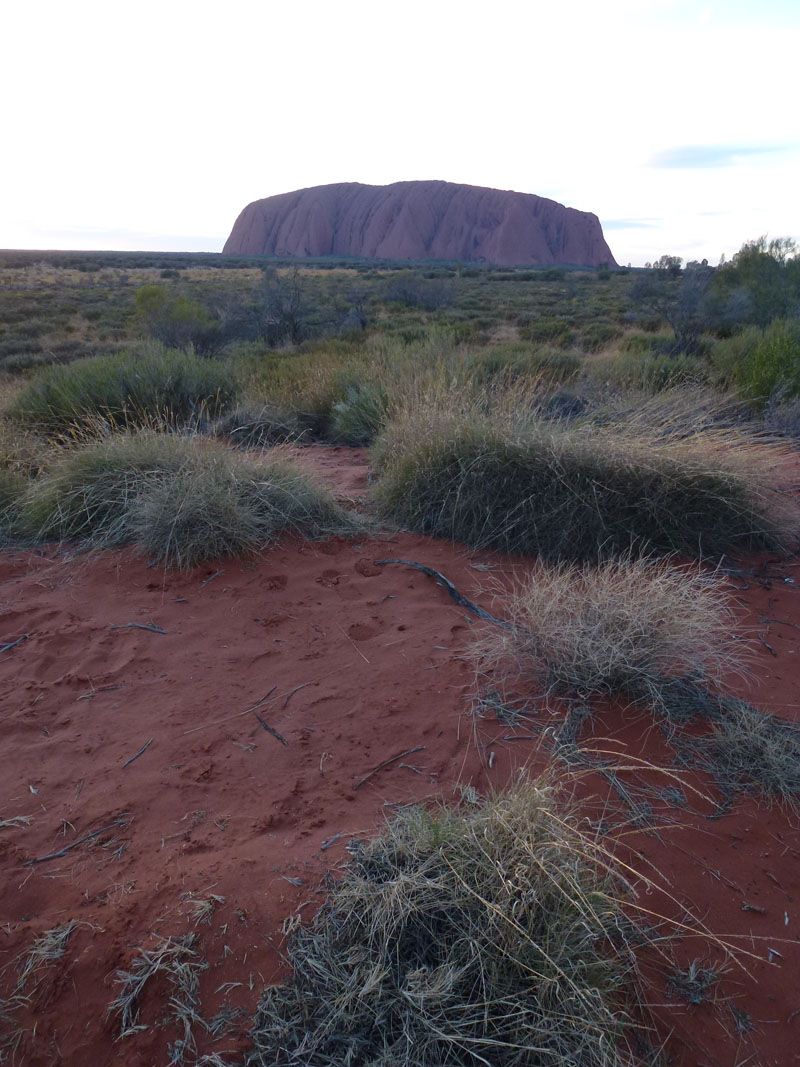 Uluru is a little like I remember it – we awoke early to another stunning sunrise and headed past the Cultural Centre to the car park at the base of the rock. Interestingly, the car park was adjacent to the place where rock climbers start their ascent. 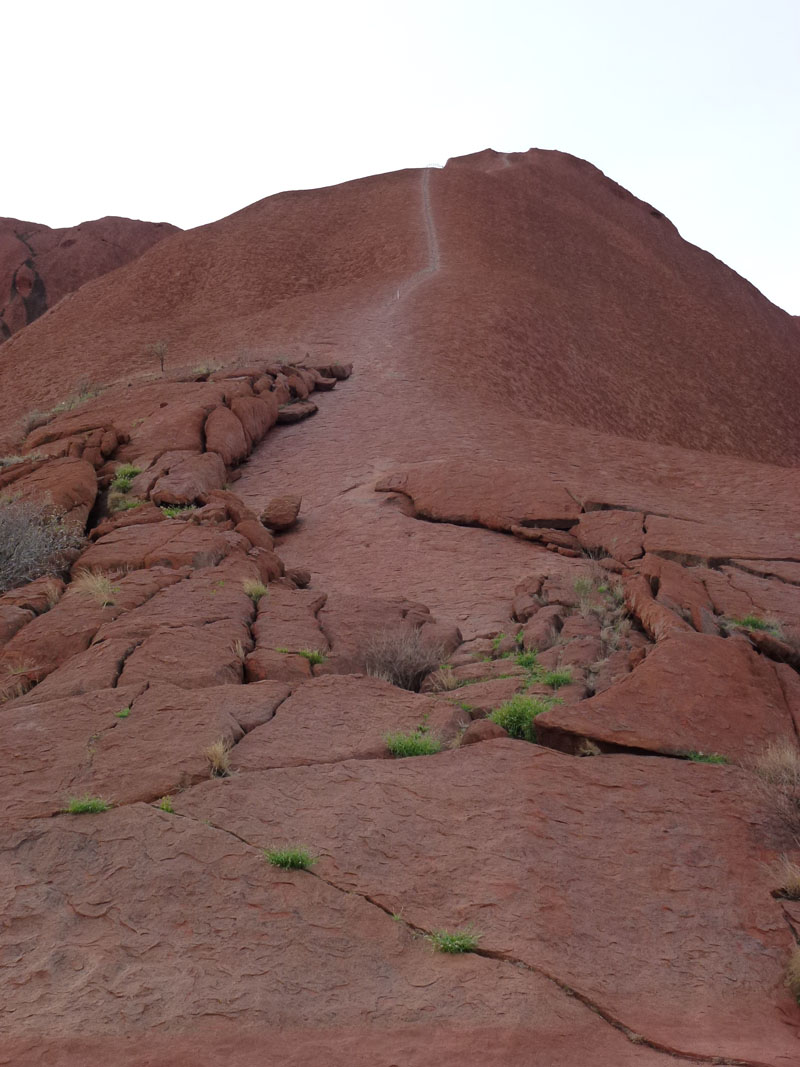 It was closed due to a myriad of reasons (probably the most important was the cultural insensitivity visitors show who climb – I know, I was young and knew no better). I remember clearly the first part of the climb, a scramble across rubble to the base of a section of chains – clearly visible in the photos. 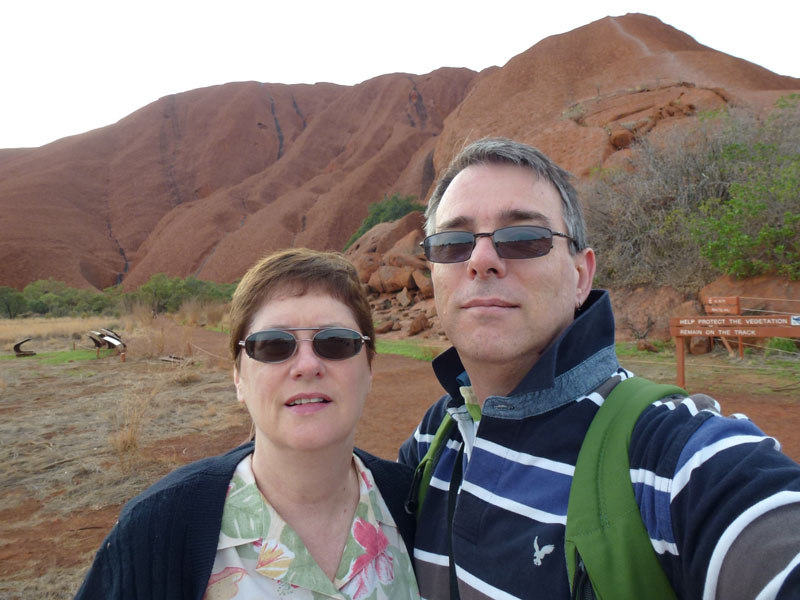 The day was overcast and the morning crisp with a light breeze. Rugged up, we began the base walk. 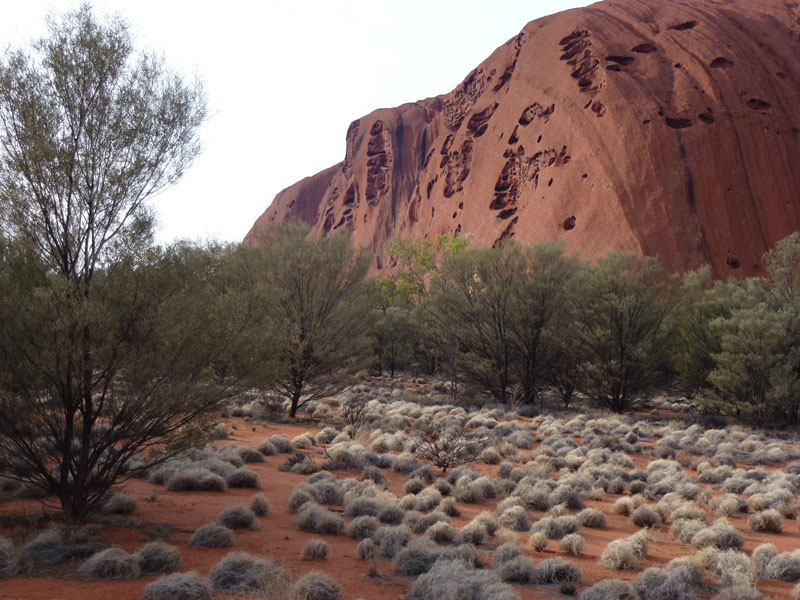 Most pictures of the rock show it as this weathered dome, mostly smooth and stark. Getting up close and personal it is really obvious that this picture is far from the case. Certainly where the rock hits the plane there are caves, crenulations, rubble and gulleys and thickly vegetated  gorges. 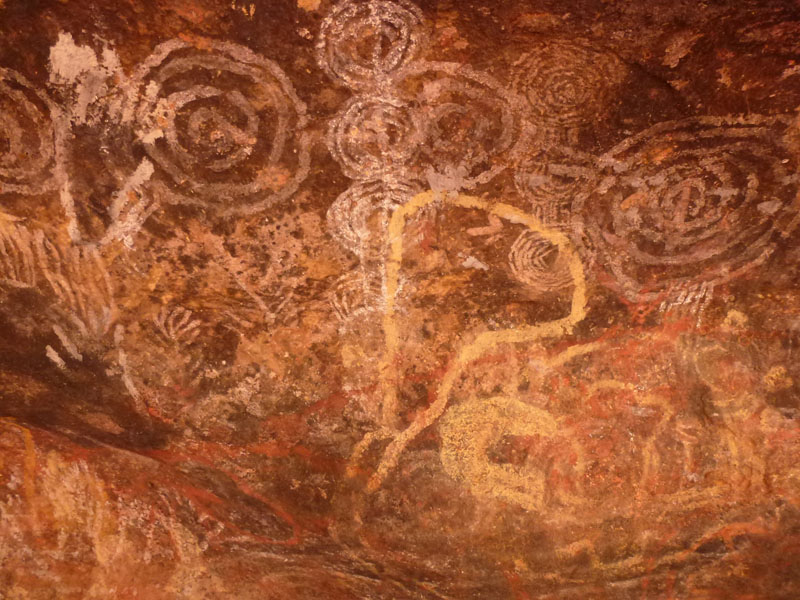 My biggest surprise was how much water and lush plant life was around. We took a detour called Mala Walk that meandered into Kantju Gorge, a shady oasis with rockpool at its deepest. The place is so tranquil, peaceful and quiet – we saw few walkers so had the track largely to ourselves. 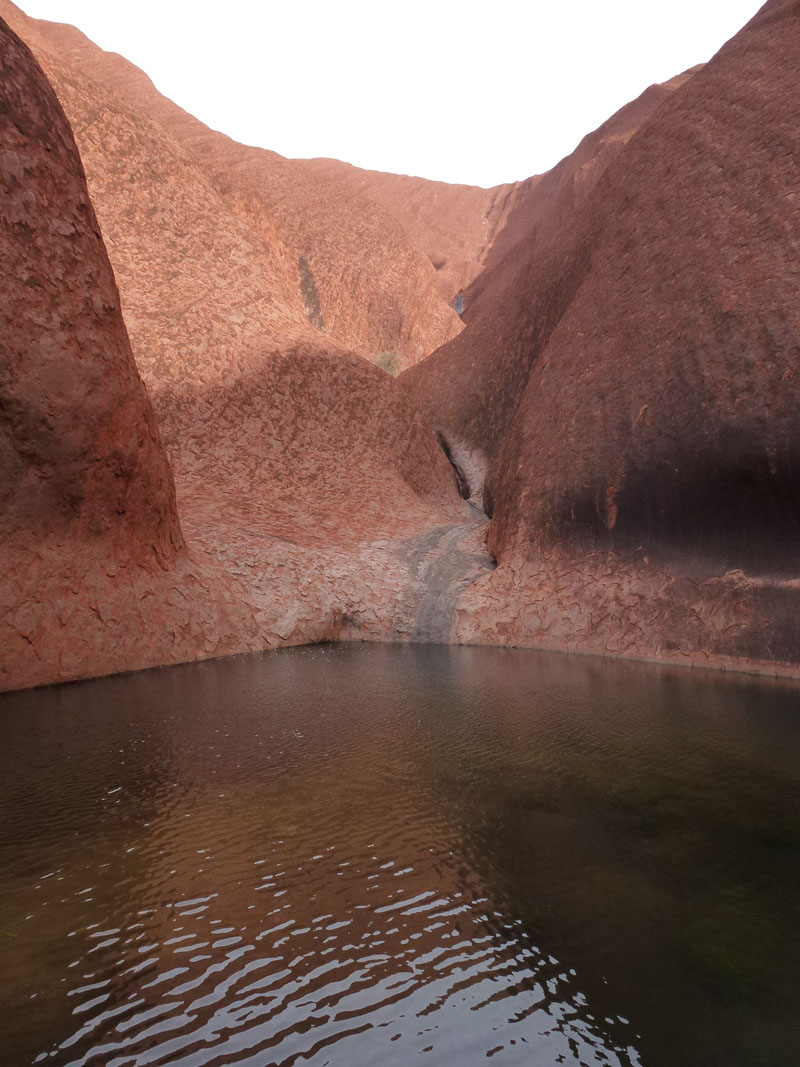 The track wends its way gently around the base of the rock, clearly indicating those spots that are culturally sensitive (no photos) and leaves huge vistas of craggy, weathered alien shapes in exposed faces. We clambered amongst overhangs and caves, rested in humpies along the way and by the half-way mark were in sun as the place started to heat up. 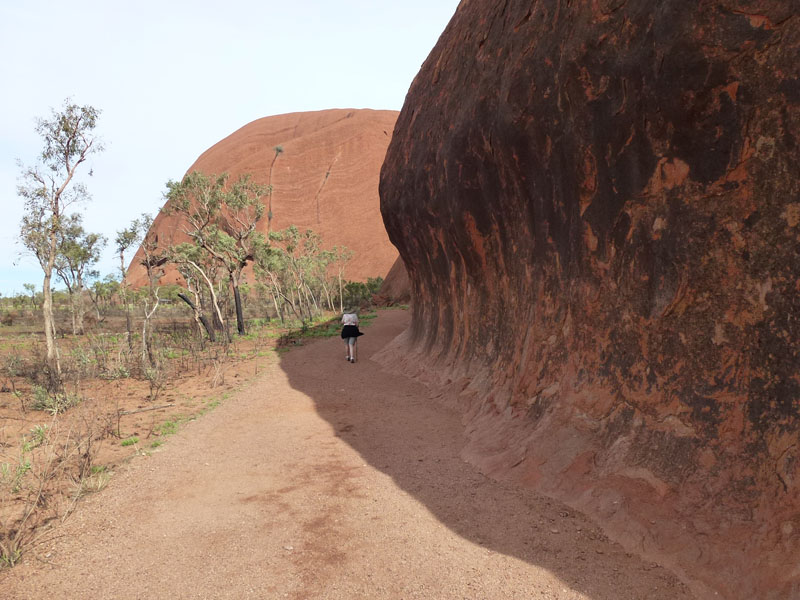 We headed in to Mutijulu Waterhole, I remembered that place as somewhere we swam when last here, now thankfully protected and full of deep cool water. They had had rains a week ago and the remnants of that were still clearly visible with a recent verdant rush of growth, particularly from those sections recently burned. 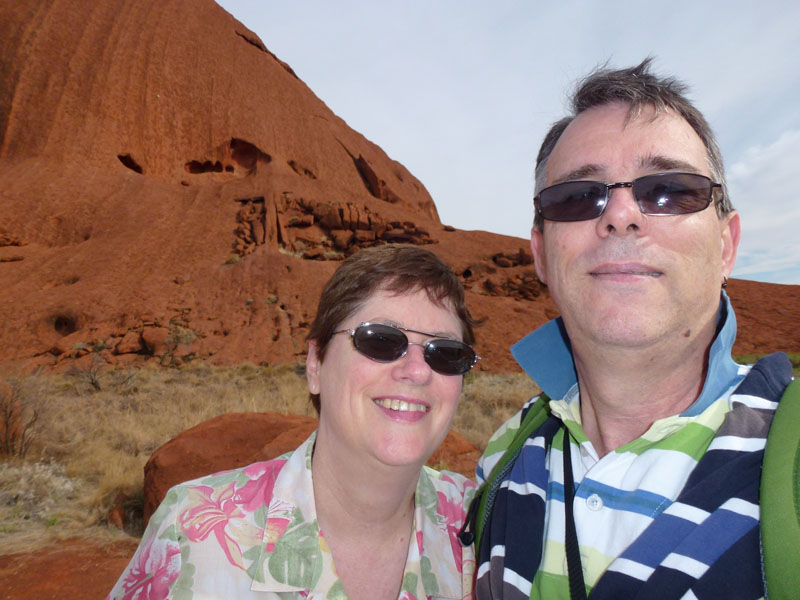 The final leg of our 10.6km trek was taxing – the terrain was still fairly easy but it was hot, we were tired, fly blown(thank goodness for the fly nets – I hate flies so much) and a little baked.

It was with a great sense of achievement that we returned to our starting point, conquerors of Uluru. We returned our hire car and returned to the resort. 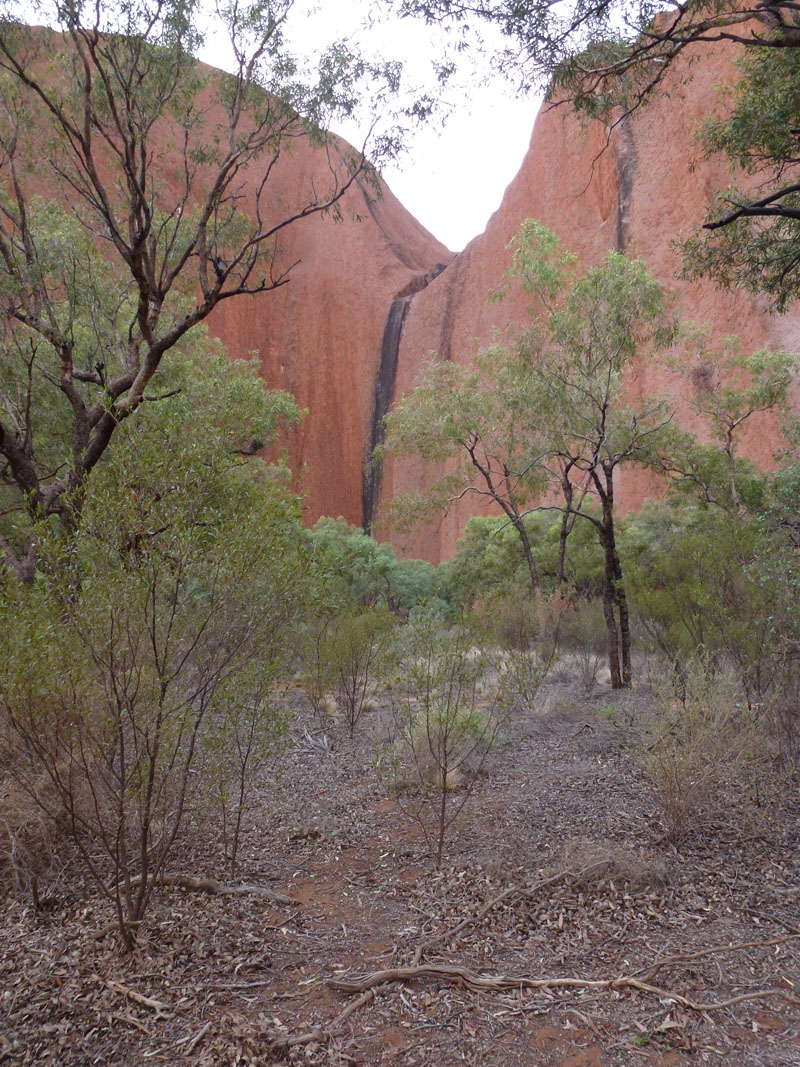 After a nice light lunch we veged out at the resort a little, being tourists and blobs. We had a posh dinner at the resort to finish our time there. I had smoked kangaroo crepes and duck terrine, Jo had bush spiced calamari and lamb two ways – all rather delicious. We both then decided on desserts (rare for us to do the full 3 courses) – I had rhubarb crumble and Jo had chocolate and macadamia fondant. Well supped, we returned to the room, packed and had an early night in preparation for an early start the next day. 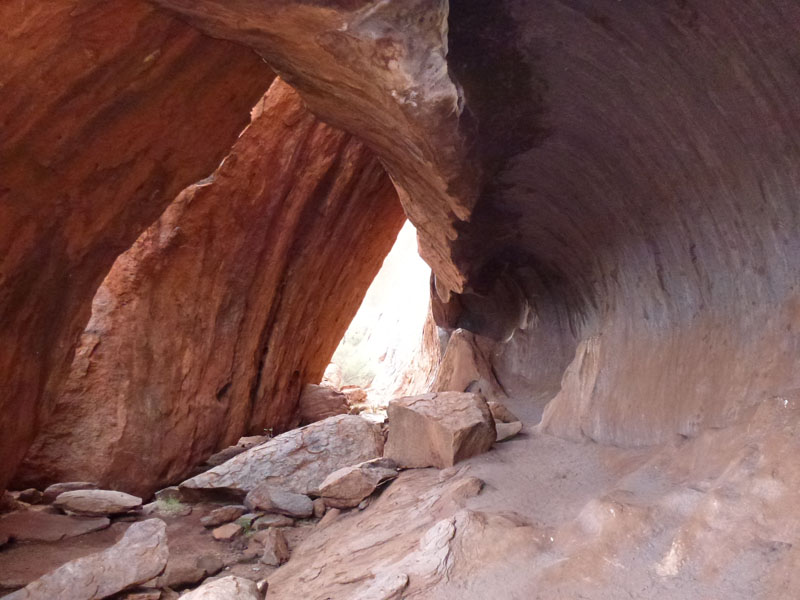 The vastness of the national park is matched by the awesome scale of Uluru and Kaya Tjuta – the colours are unmistakeable and no photo seems to do them justice. We loved our time in the red centre, but it is time to move on.