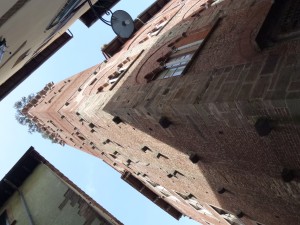 After a lovely rest day in Lucca, we reluctantly packed, slept solidly and awoke for a dreaded transfer. 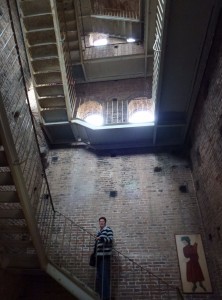 We say dreaded because they are hard work – our suitcases are awkward up and down stairs, in and out of trains and we had a bit of that to do. We called a taxi and in broken italian managed to explain where we were and that we wanted to go to the train station. 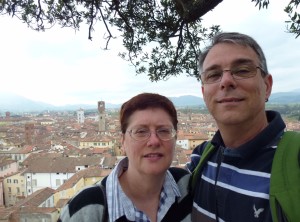 On time he arrived, helped us in the rain get the bags in and headed off. In nearly no time (or money) we were at the train station. 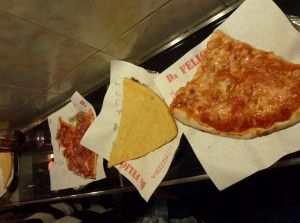 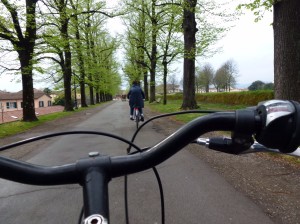 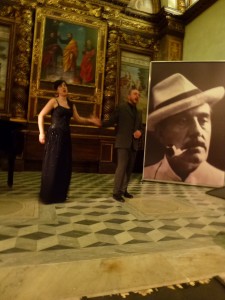 We opted for a regional service to Pisa, they are cheap, reliable(ish) and we managed to purchase tickets from a machine so all was ok. I think we were probably rude in that we stacked our suitcases but there was no where really that offered an option. Arriving at Pisa Centrale we found “left luggage” and stowed both suitcases and the biggest backpack, opting to travel light to the Tower. 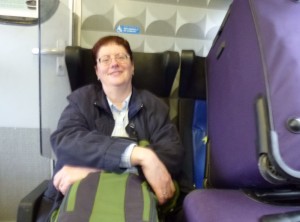 From the train station, we took an easy to find local bus to the site of the tower and began the ritual of taking photographs that each were more amazing than the next – you approach the tower by walking a piazza that starts at the Baptistry and right away something about the Baptistry seems not quite “right”. 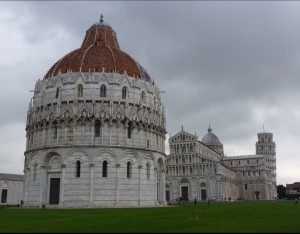 Pisa subsoil is very wet apparently, foundations are a problem and the lovely domed Baptistry has a slight lean on it when referenced by the adjacent cathedral which seems to have spread its weight a little more evenly over its foundations. The leaning side of the Baptistry has a lighter roof (zinc or lead) than the other side (terracotta) 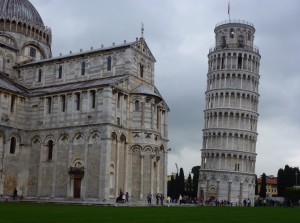 Walking further along the Tower, which is actually supposed to be just the bell tower for the Cathedral but has taken on a life of its own, pokes its head around the far end of the Cathedral. The closer you get the more eccentric the lean becomes and the more hilarious the tourists are also. Taking a photo trying to “hold up the tower” seems something we need to do. It is almost more entertaining watching people do it but we moved on towards the tower.

Originally we had decided not to climb. Since the year our legs broke, Jo has has an uncontrollable irrational fear of slippery surfaces and all research suggested the way up the tower was bannister-less marble. Given our recent escapades up towers of all shapes, sizes and difficulties, the 400 steps of the leaning tower seemed simple, so we headed off to buy tickets and stow our backpack (no bags allowed in the tower).

Managing to secure tickets that let us climb at 10, we headed off the a cafe for breakfast – deliciousa italian hot chocolate and jam-filled croissants. Suitably fortified, we girded our loins, joined the then short 10 o’clock climb line and waited as the sky lightened and the sun fought to come from behind the clouds. Although it had been raining that morning in Lucca, it had stopped by the time we reached Pisa and continued to fine up for the rest of the day. 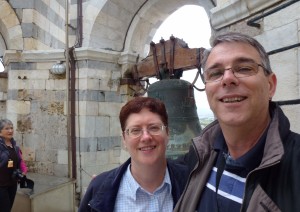 When our group was let in we were briefed on history of architect, design and phases of building. Apparently by the first few levels it had started to tilt, architects resigned citing the building an embarrassing mistake only to be resumed later. Adding the heavy bells (oddly the heaviest bells are on the lean side – madness) the tower was complete and continued to lean more eccentrically until it was closed as a hazard.

Relatively recently, structural engineers have slowed the towers lean, reworking the foundations but it is nuts and looks like it will fall over any moment. The tilt it so eccentric that when you climb the steps there are sections where although you are walking up steps, you are nearly getting lower, more obvious on the way down where down steps go uphill. It is a little twisty Turney and you get a little seasick as you climb the stairs that run the outside skin of the hollow tower. 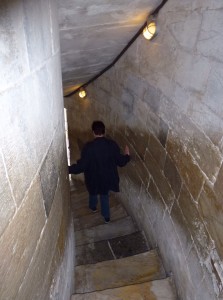 The view from the top is is wonderful, panoramas of Pisa, the people,on the ground look like models, all contorting while others photograph them helping to hold up,the tower.

We visited the cathedral, a grand and beautifully decorated church and were once again reminded of how these old churches seem to dwarf people, their scale seems to render us unimportant. The roofs were richly decorated as were the altars, niches and other associated parts of a working church. 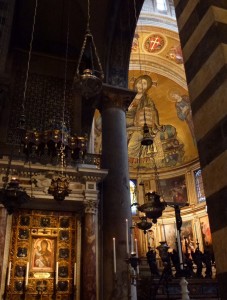 Returning by bus to the Pisa train station, we bought a warm drink (and got free wifi for doing that) then retrieved suitcases and found the correct platform for our train to Rome. Our experience of italian trains is that they arrive but so far never on time (retardo 10′ to ’25 meaning 10 to 25 minutes late). We has 2nd class tickets, heaved our bags aboard and collapsed into our seats for a 2ish hour journey to Roma. We both dozed, it is tiring being tourists when you want to,see lots and experience as much as you can in the time away.

Arriving in the late afternoon in Rome, a taxi ride to our apartment, home for the next 4 nights. We were greeted by our host, shown around and given maps and local advice, then we set off in search of the supermarket for supplies and the makings for dinner. We had picked up a fantastic jar of pesto while on the Liguarian Coast and decided simply to toss that through some fresh egg pasta, a deliciousa dinner. 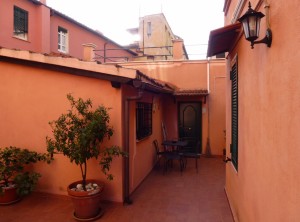 After dark we set off again, just for a walk around this section of Rome, first stop the Coloseum lit at night in very dramatic ways. We will tour the building as part of a tour we pre-purchased off the internet but seeing the scale and majesty of the building at night was breathtaking. 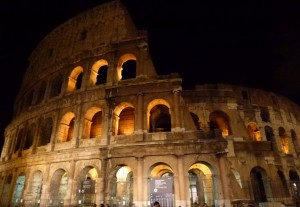 We then made a pilgrimage to a gelataria for a frozen fix- properly made the fruit gelato here is simply delicious, with such variety in flavour we are continually spoilt for choice. 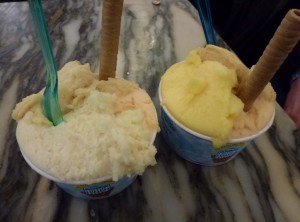 Tomorrow we begin our touring of Ancient Rome – a couple of ruins exploring ancient ruins, we are looking forward to it.