When life gives you Chiyogami or hand-made Washi, with a relatively simple twist you can turn it into a hex-box:

Lovely hand-printed Washi (swirls of fibres, block printed 20+ years ago) and modern Chiyogami (machine made but lovely) are actually fairly difficult to work with because you cannot see the creases and Fujimoto’s hex box establishes a bunch of landmarks to form the base-creases.

This is not a first fold, but the form and ingenious locking mechanism, slight variation to form lid and base make this one of my favourite folds – a jewel box when made from lovely paper.

Want one? Buy some nice paper (A3 or A4 work just fine, this is folded from a “golden rectangle”) and I will make it for you (or teach you how to make it yourself if you are near) – have your people call my people and we will make something beautiful together. 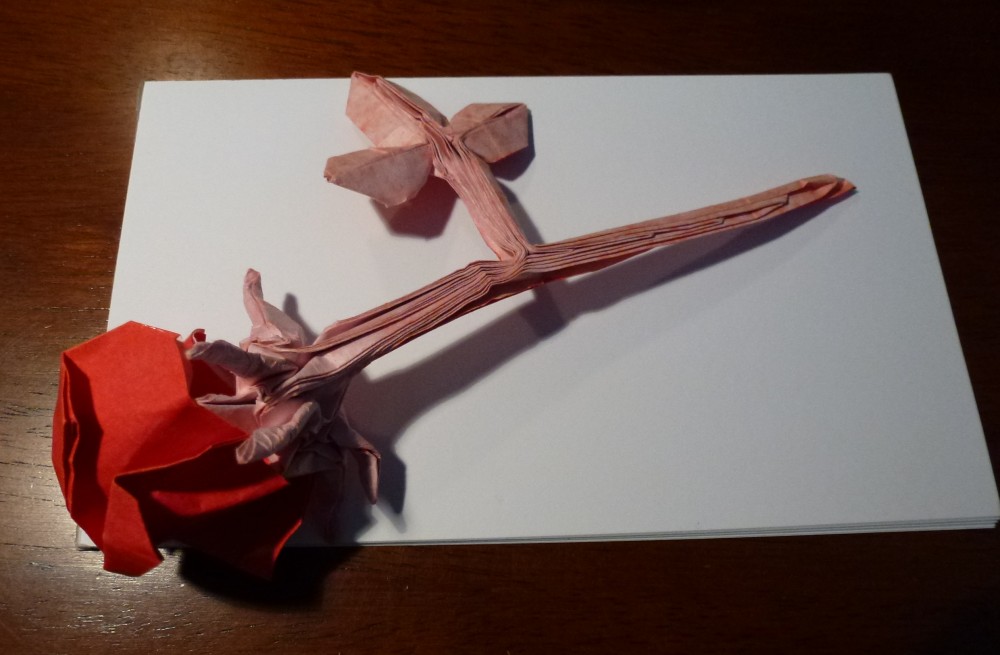 Brian Chan is an amazing designer (Attack of the Kraken is one of his) and this flower is an ingenious, if intense, use fo a coloured square of paper.

If the paper was coloured green one side, red the other, then the way this design turns out the green bits of the flower and the red petals sort themselves out appropriately – amazing.

I only had some glossy red (a cheapo pack of coloured origami paper that loses colour all over your fingers) but persevered with it, despite the mess and the tiny size.

I still have to master the flower shaping, it sort of looks correct (and I have no doubt if i wet-folded or used methyl cellulose I could mould it more naturally , but I am happy I have got the hang of the fold.

I used a 25cm red/white square and that is hard work – some of the accordion pleats are tiny, but it worked out ok. My second fold was a 45cm brown kraft fold that was easier to complete. 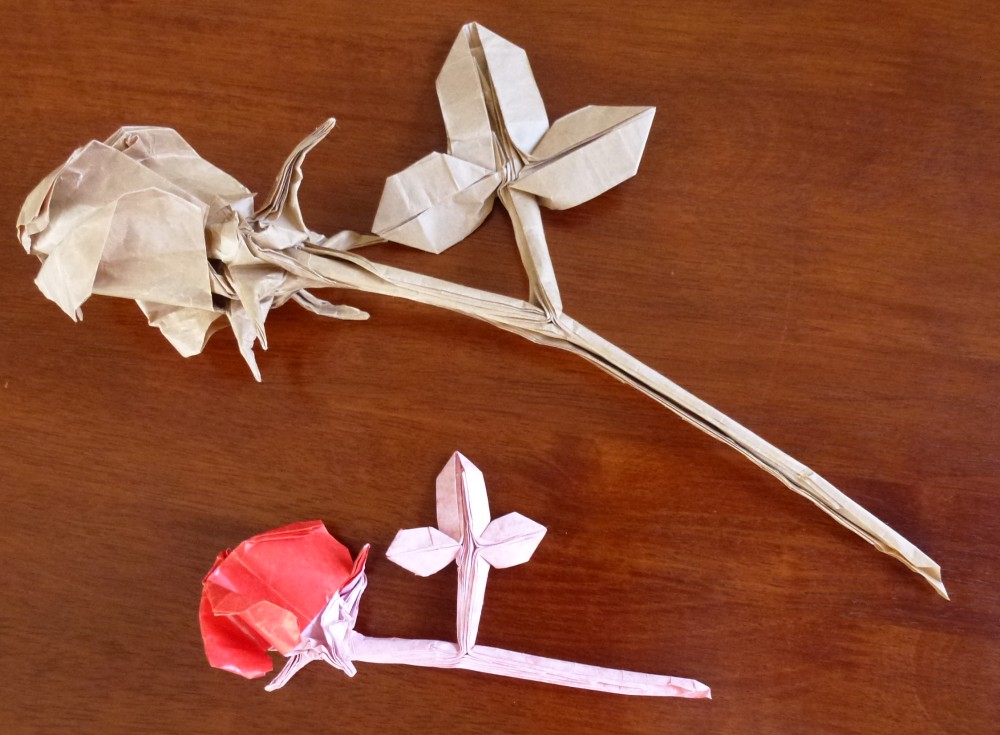 Interestingly, the box-pleating technique to raise the leaf is similar to the “dollar flower” I have been folding from the cut-offs from A3 squares, so found that part of the model really easy. The technique of raising the colour-changed petals for the rosebud is ingenius.

Took a leisurely walk through some rainforest and noticed these perfect blue wrens, flitting from trunk to vine: 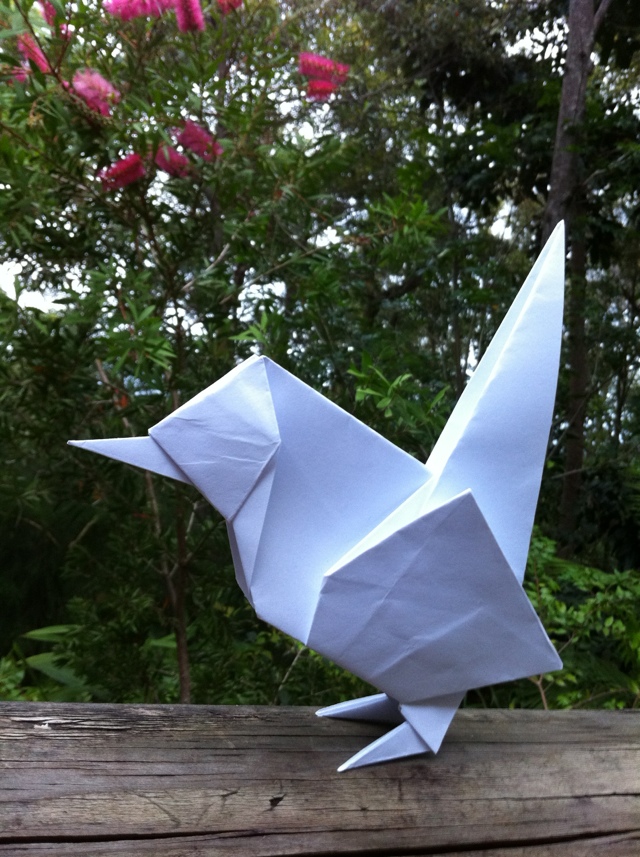 Exploring a new book called Origami Essence by Roman Diaz, this little beauty was amongst the models I have decided to try.

I like the “wrenny”ness of this model. Some lovely techniques here for this keeper of a freestanding bird model

When I was a kid, my parents gave me Tintin Annuals to read – the adventures of a young ginger and his dog Snowy: 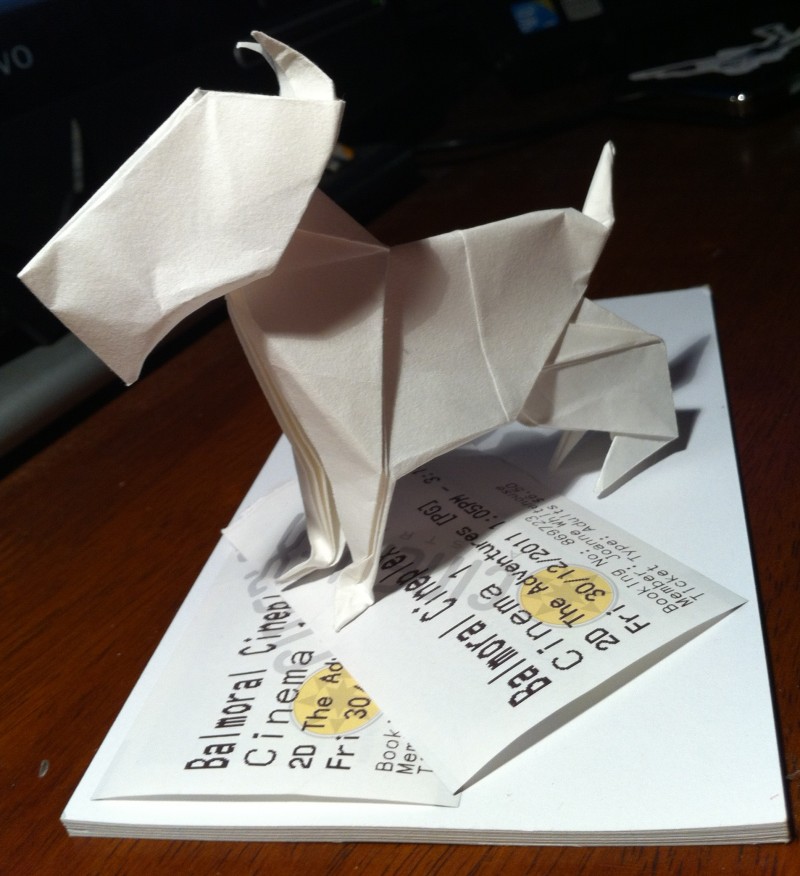 I must admit I have fond memories for the adventures of Tintin, and had clear ideas in my mind of what Captain Haddock, Thompson and Thompson and Professor Cuthbert Calculus were like. I have just seen the film and I was delighted to say the least. What a cracking tale, told so wonderfully. You realise why they chose of do it as computer animation – most Tintin adventures would be un-filmable in live action given the pace, locations and lunatic athleticism.

At breakneck speed I was transported back to the Secret of the Unicorn, Red Rackham’s Treasure and other adventures I had – I remember 6, but wikipedia says there were 24 in total, so i only saw a small collection of Hergé stories really. 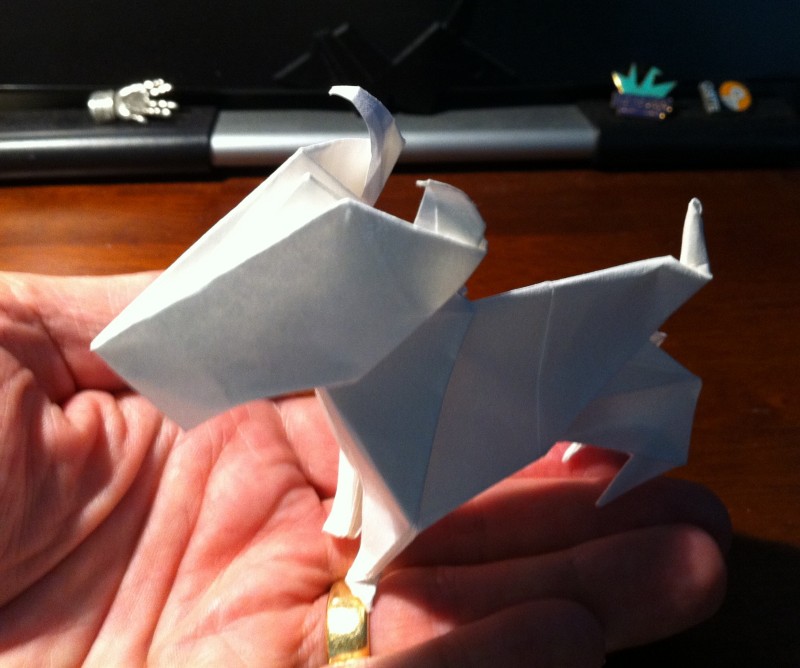 Although I have never really liked dogs, I was always taken with Snowy, Tintin’s faithful dog – I loved that he could talk to the dog and the dog actually understood – as an adult that makes no sense but as a kid there was no problem. Mind you, I accepted Lassie, Me Ed and all so my brain was already soft 😛 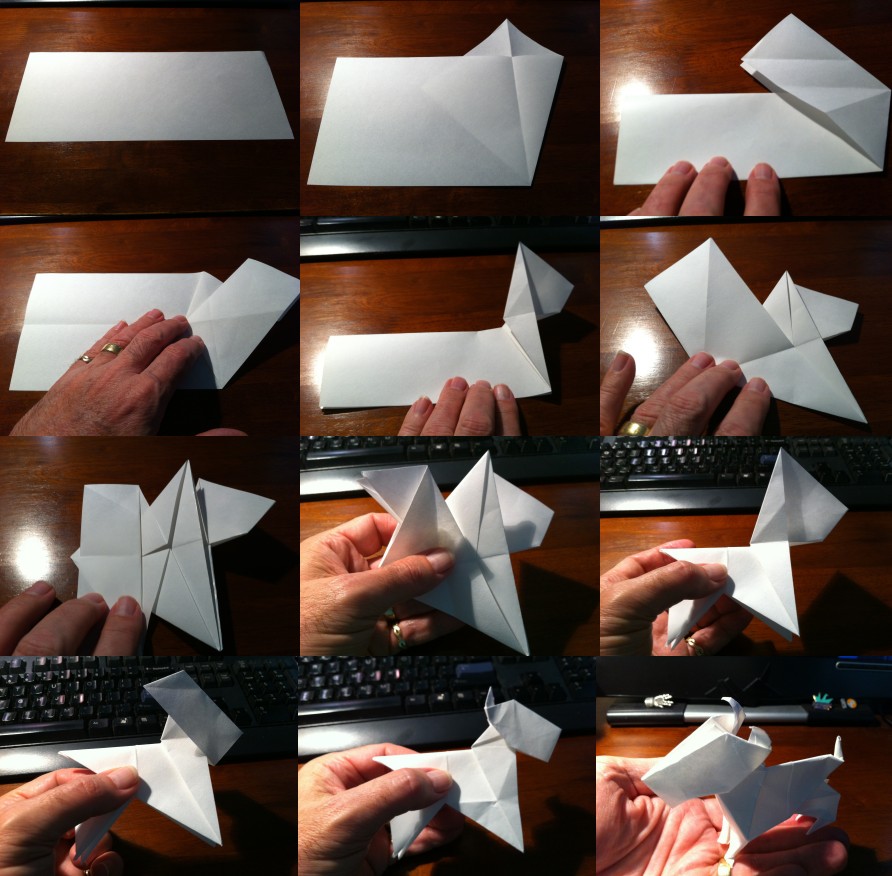 This is a “billfold” – that is it was originally designed to be folded out of an american dollar bill. I do not have any so I used the interweb to find the dimensions, doubled them and cut a rectangle to size. The instructions were very poor, actually, and at many junctures I merely “improvised” as I knew where we were going but could not follow how I was being told to get there.  In the end we have a plucky rendition of Snowy, and the second last model in the 365 challenge. Hope you like him. 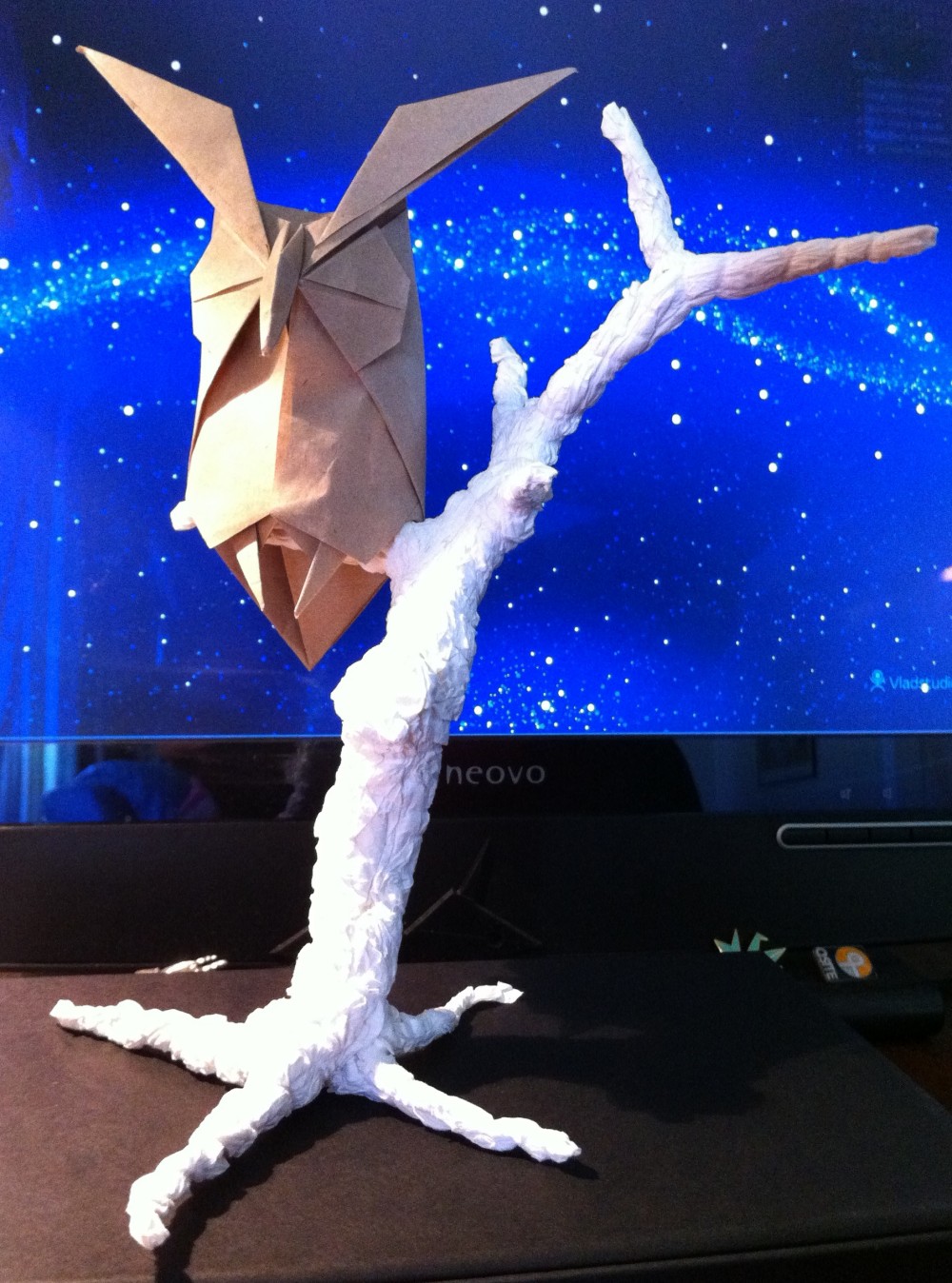 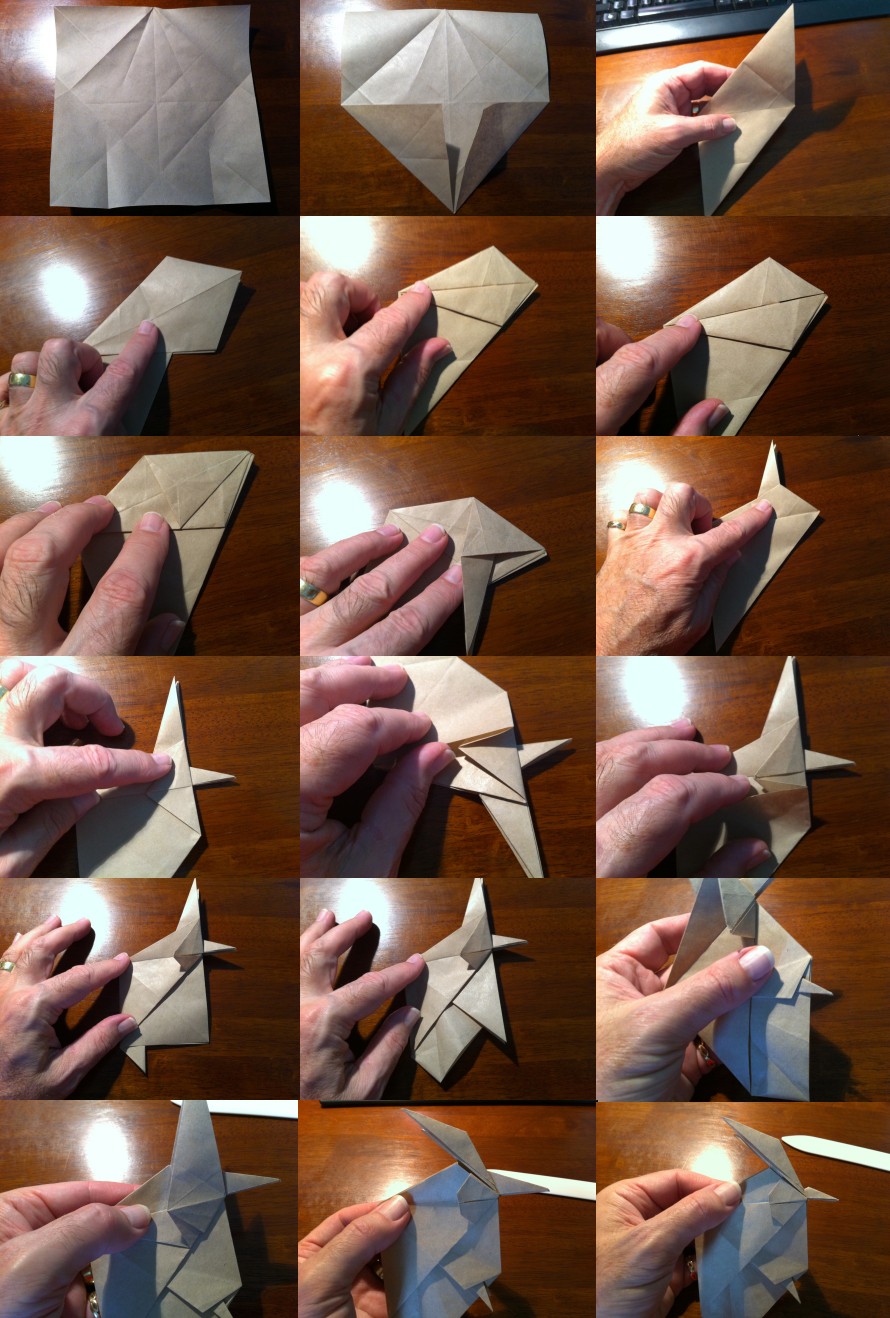 It is Boxing Day, and I thought it appropriate to try a box I have had in my “must try” pile – David Brill’s Masu: 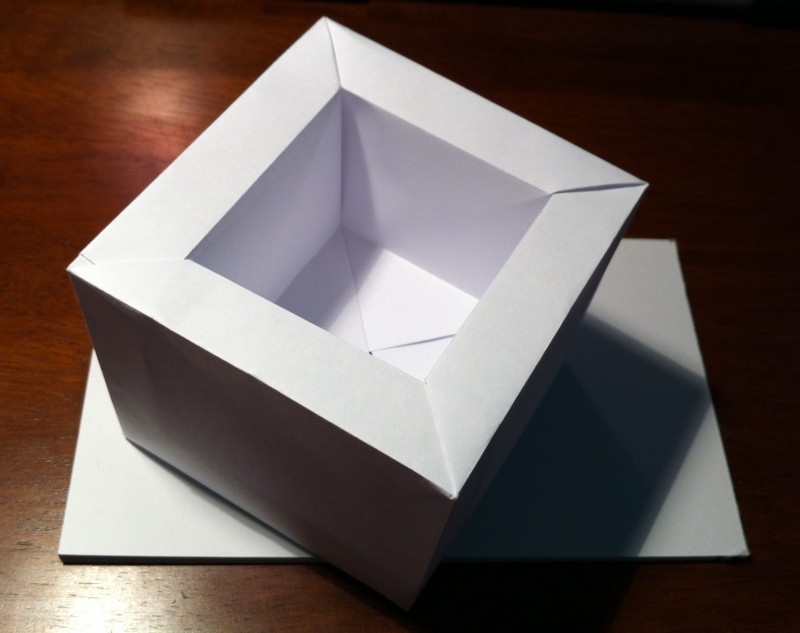 A Masu is a traditional Japanese timber box that used to be used to measure rice or beans, these days it is used for sipping sake out of. 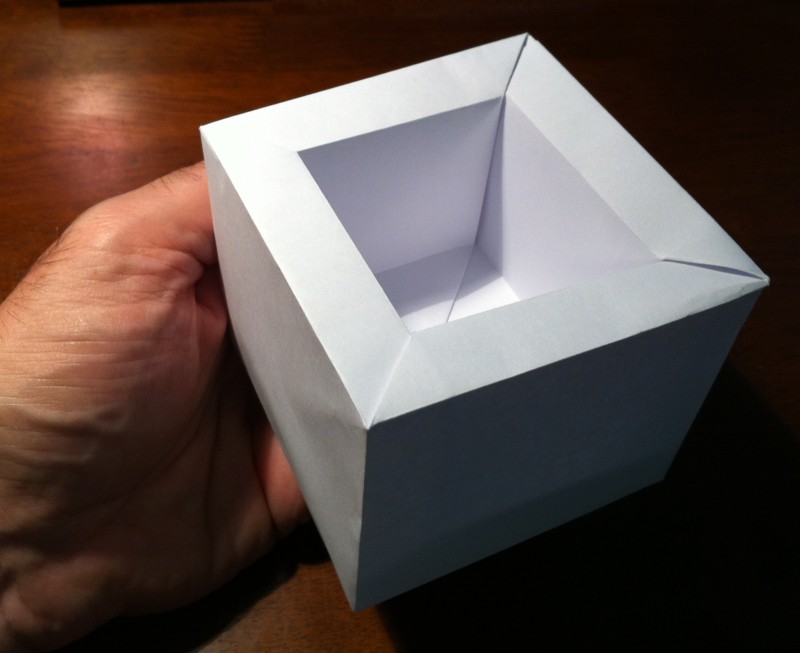 This ingenious construction is fully 3d – outer and inner edges kept apart via a nifty corner trick (must remember that sort of pleat) and the bases are sprung using a brilliant twist. 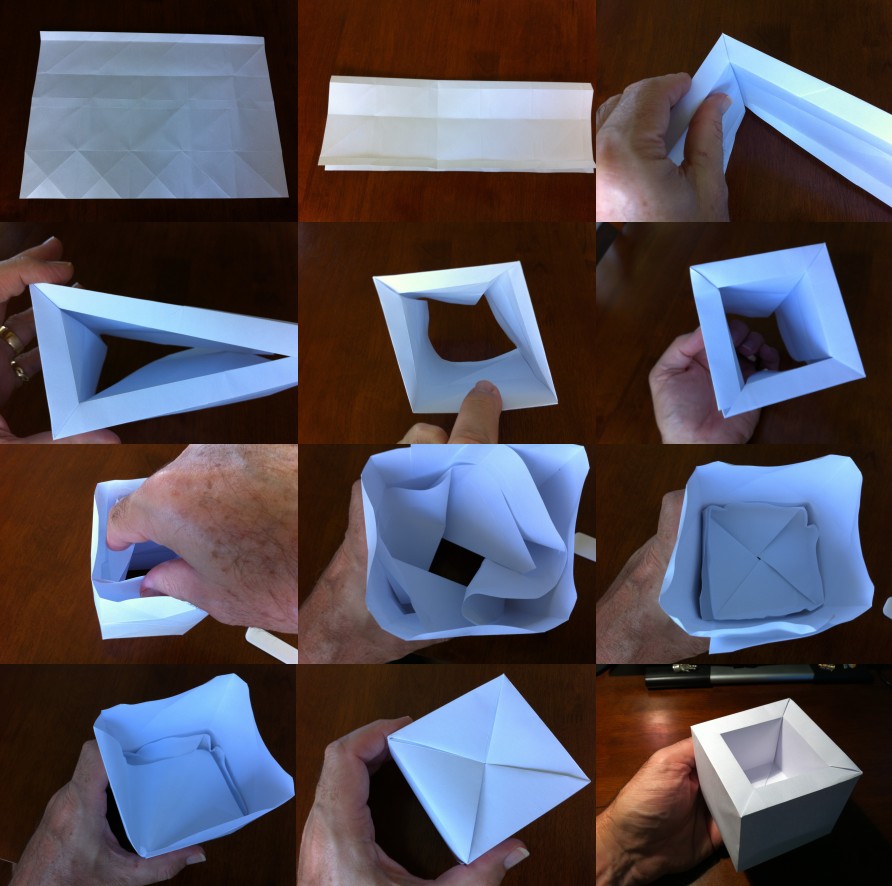 An exercise in fifths, the pre-creasing makes all the points necessary for a wonderful collapse – this is a keeper, as it’s proportions and technique have other applications – particularly like the corner collapse that I thought was initially impossible. 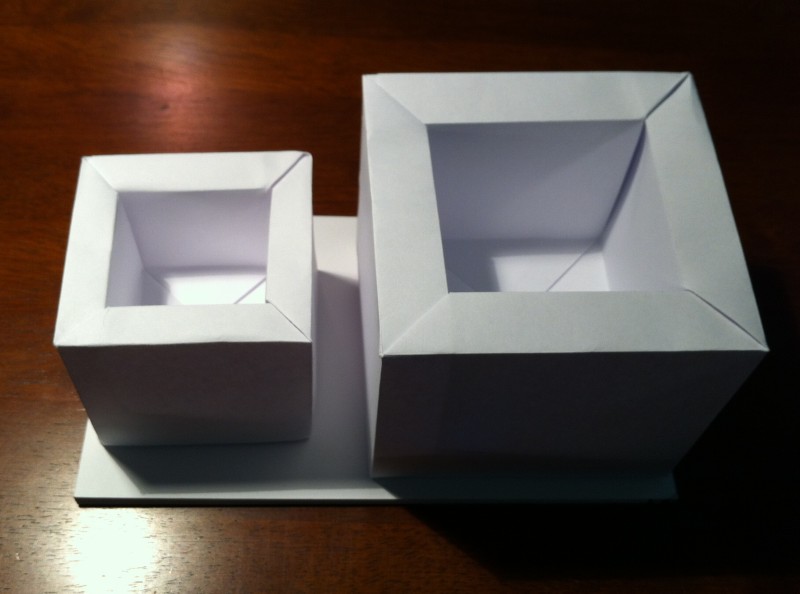 Folded from an A3 rectangle, I then tried an A4 (just to prove to myself it was not just a fluke) and it is even cuter – nice.

Now I am going visiting to the Sunshine Coast today, so thought something marine would be appropriate: 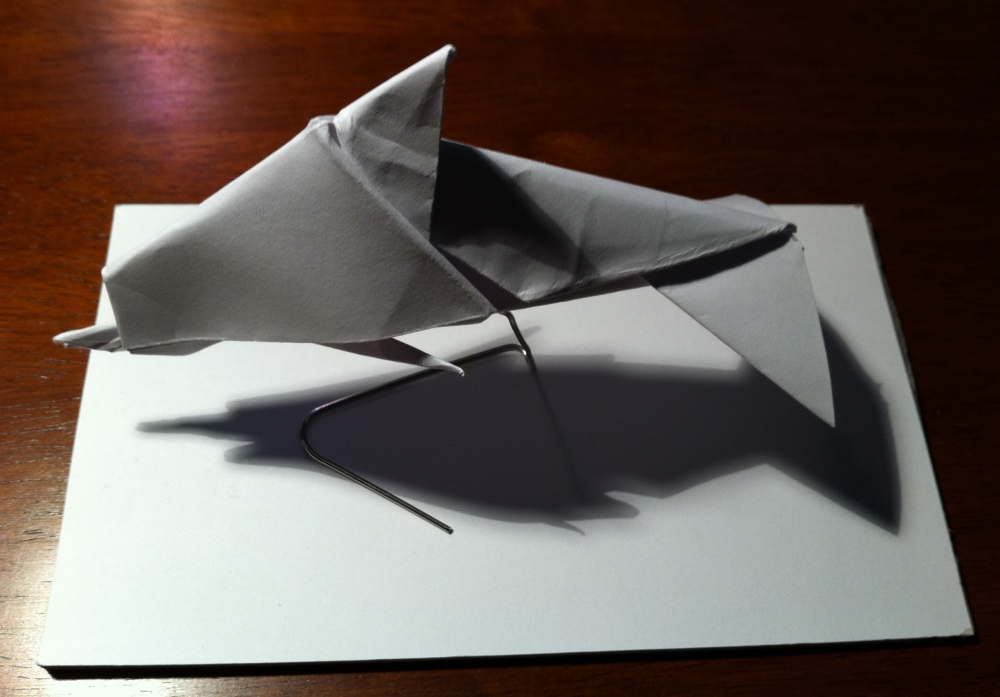 This lovely dolphin reminds me of “flipper” who appeared to frolic in the sea. The sad truth about captive dolphins however is that they lead miserable, confused lives and have a really short lifespan due to stress and noise in their tanks. There is increasing and justified pressure to release dolphins and orcas from captivity as it is inhumane.

The design for this model is ingenius, the body is triangular in cross-section, lovely tail flukes, sharp dorsal and pectoral fins and a beak, with open mouth.

It was difficult to photograph this model, so I perched it (via a blob of blutac) atop a mangled paperclip. Well dome Mr Brill

Those who know me know that I am a bit of a trekker, always on the lookout for Star Trek related stuff: 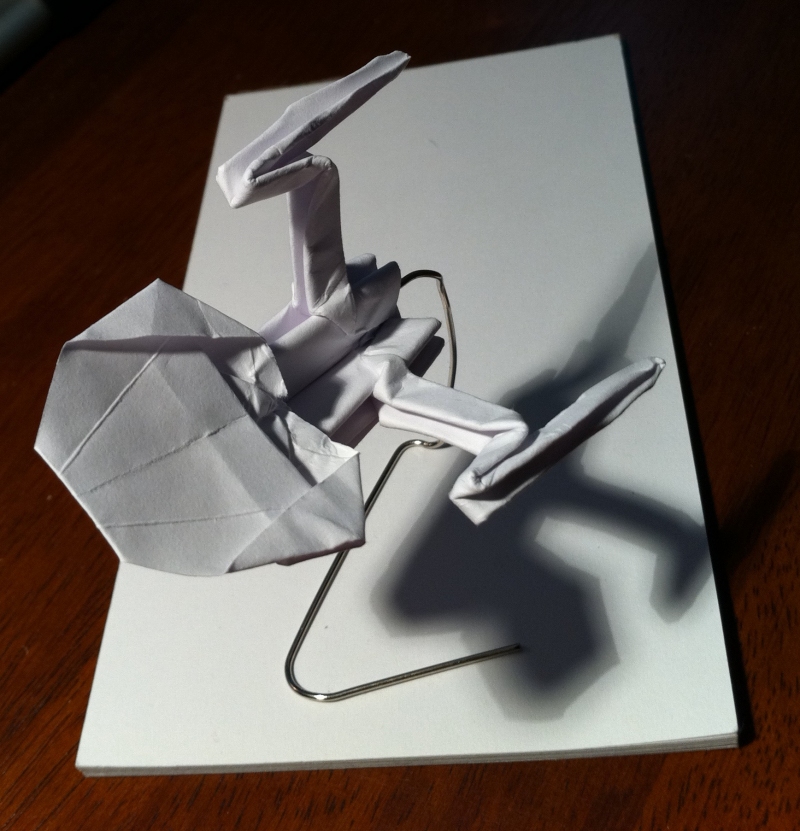 When I saw this simple model I knew I would give it a go some day. Tonight my mate Mike and I watch some retro Trek (Original Series) and I thought it opportune to roll out the micromachine version – not sure if you remember the concept – there was a sort of “matchbox” to that was tiny versions of other things – this looks a lot like the micro machine version of the enterprise. 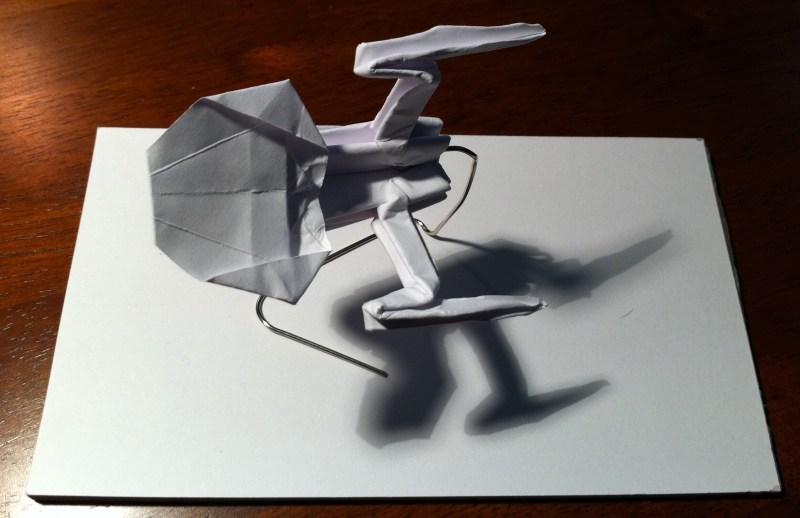 At this scale it was very fiddly indeed – tiny little folds in a very dense mid-section, but it figuratively represents the model so I am happy enough with it. If I were to fold it again I wold start with a much bigger sheet of paper. 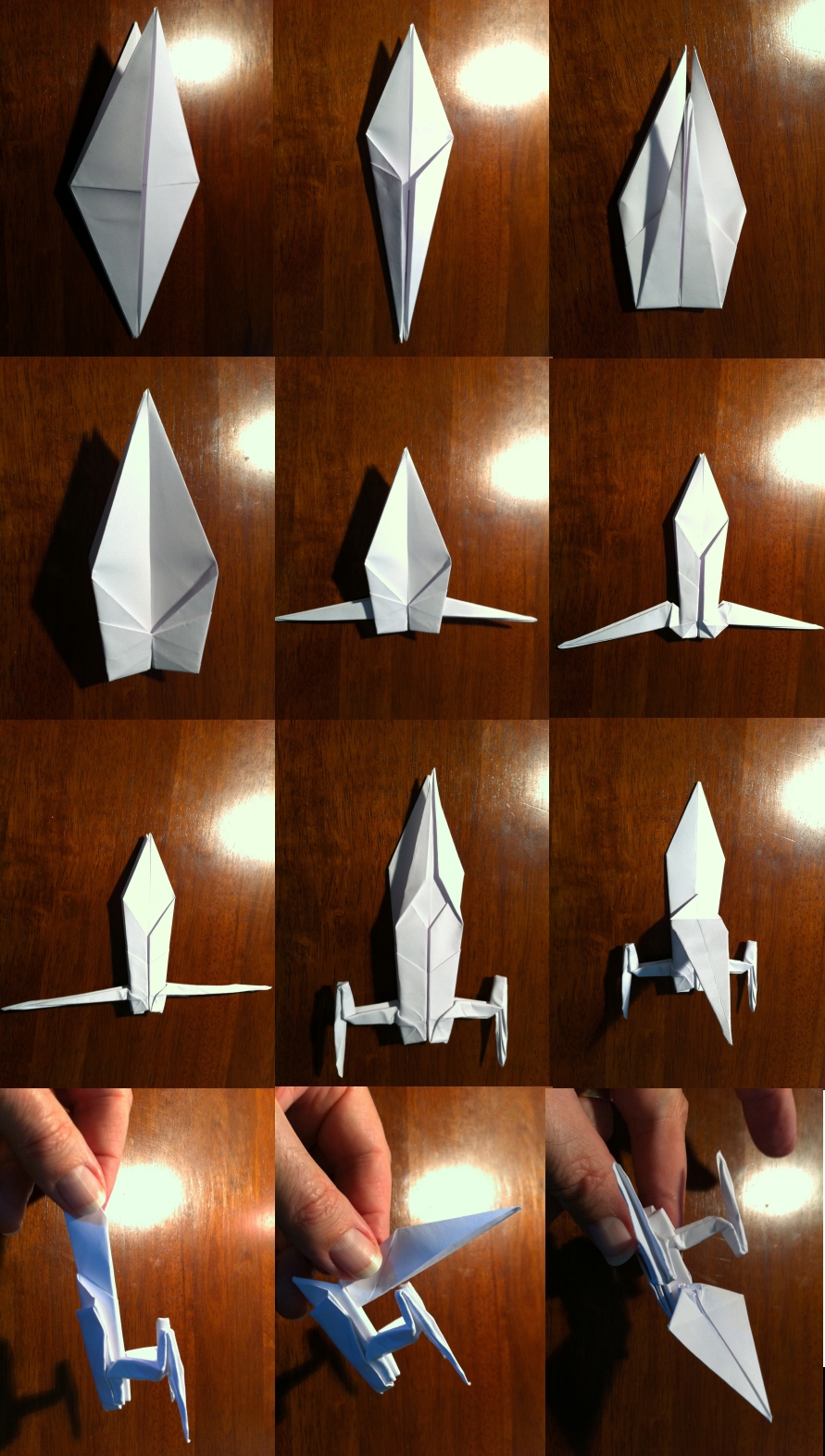 Space, the final frontier, these are the voyages of the starship Enterprise …

Now I have been looking for nicely shaped Dragons: 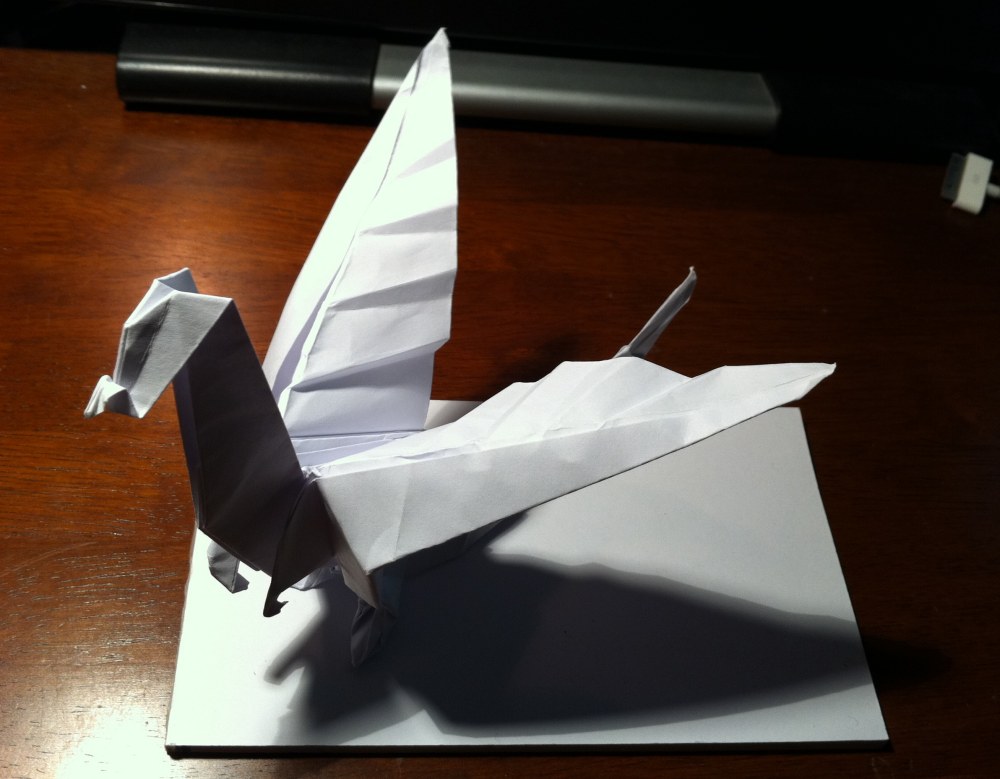 and stumbled across a Hungarian fold that reminded me of a cartoon one. 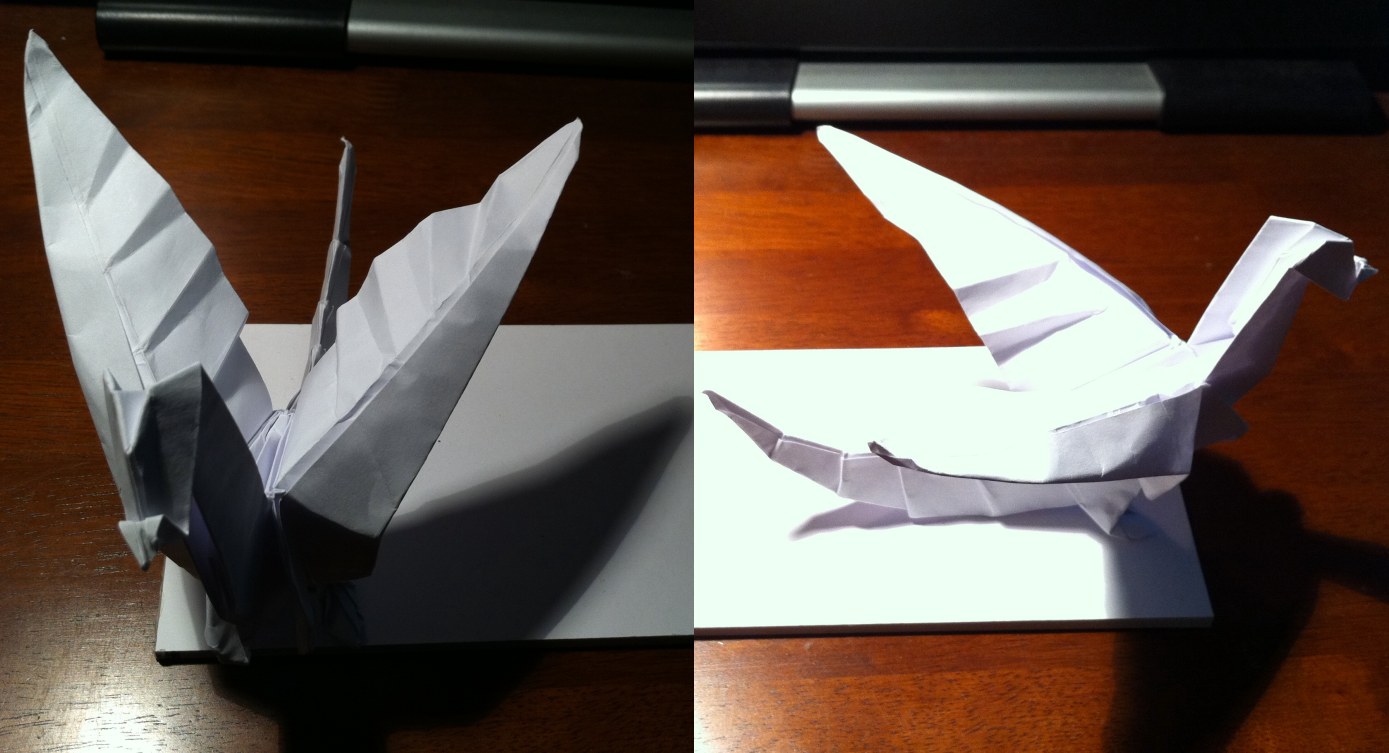 I am working towards a Satoshi dragon, so I need all the dragon-practice I can get. I would like to pretend this one was my first-fold, but I scored a Year 11 Maths C stuporvision at school, and got bored with matrices and vectors so tried it then – so sue me.

Was going to give it to Josh, who has not shut up about dragons since he heard I was going to try the ancient dragon, but then he did not stop talking so took it back – you win some  lose some I guess.

You see a gaping cavern, the sudden rush of sulphurous breath hints at a hiding dragon, you fumble in your robes, raising your wand and hope your newly learned incantations are sufficient defence against the scaley foe … 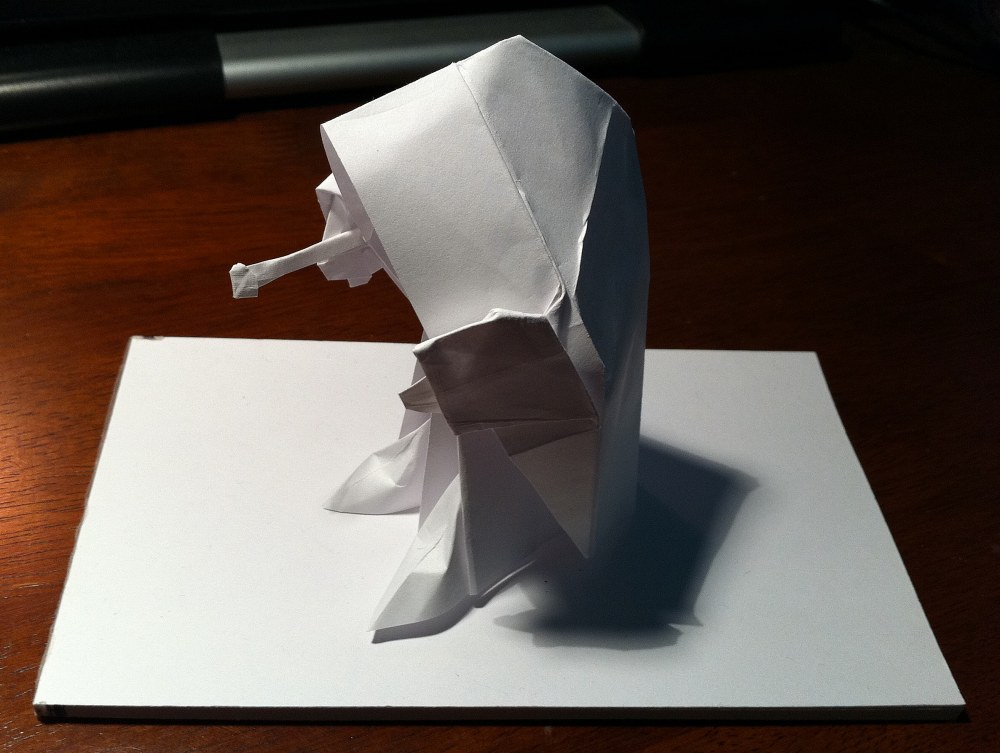 I love RPGs, get lost in them all the time, as does my Wife. She has a good friend, on the other side of the world, who is having a birthday today – **Happy Birthday MIKE!!! ** So I thought making a mage (his fav class) would be a good idea. 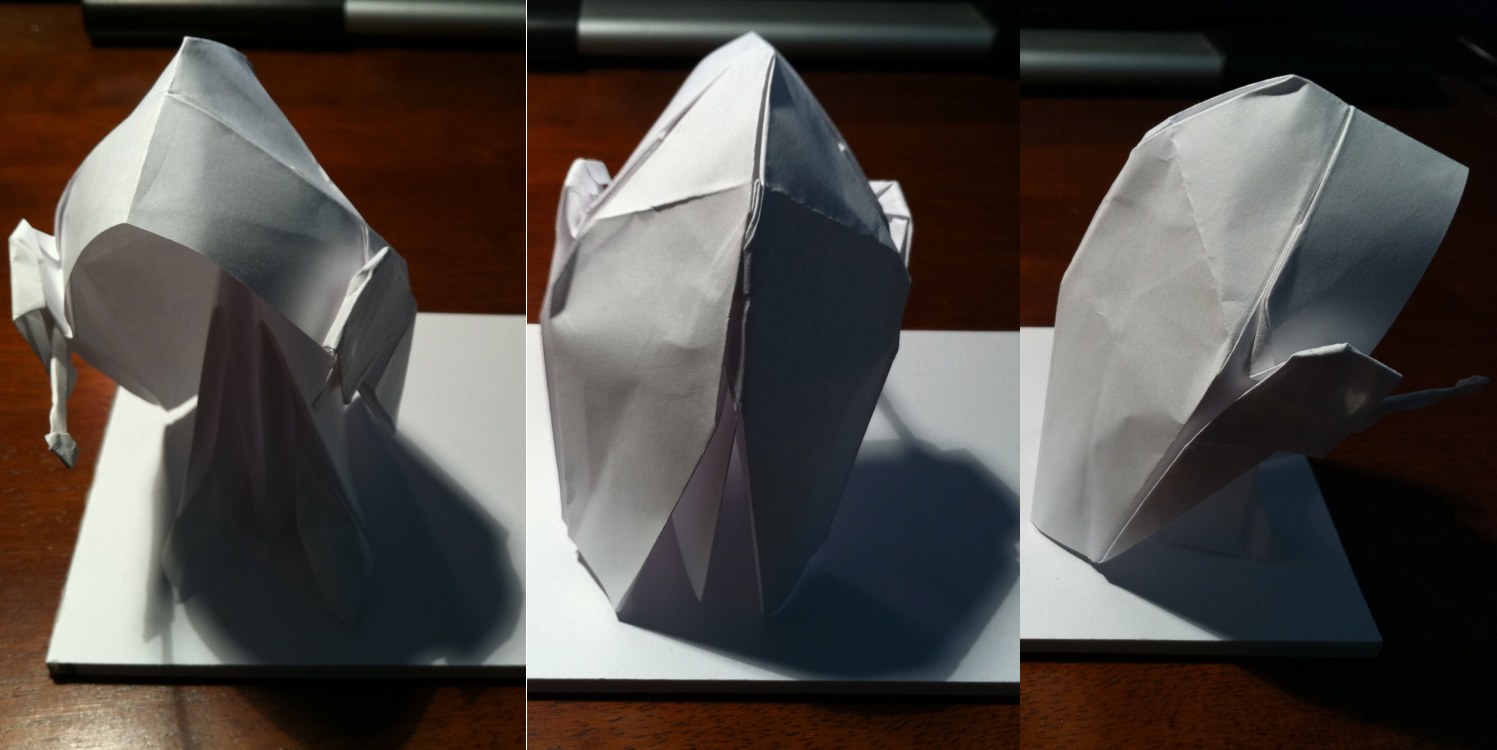 Cute model, relatively few folds (which is good as I am not feeling the best atm), hope he likes it. Doubly fitting as it is also Draco Malfoy’s Birthday (potter geeks should confirm this).

So tonight I went to see the School Musical with All Hallow’s School and St. Joes “You’re a Good Man Charlie Brown”: 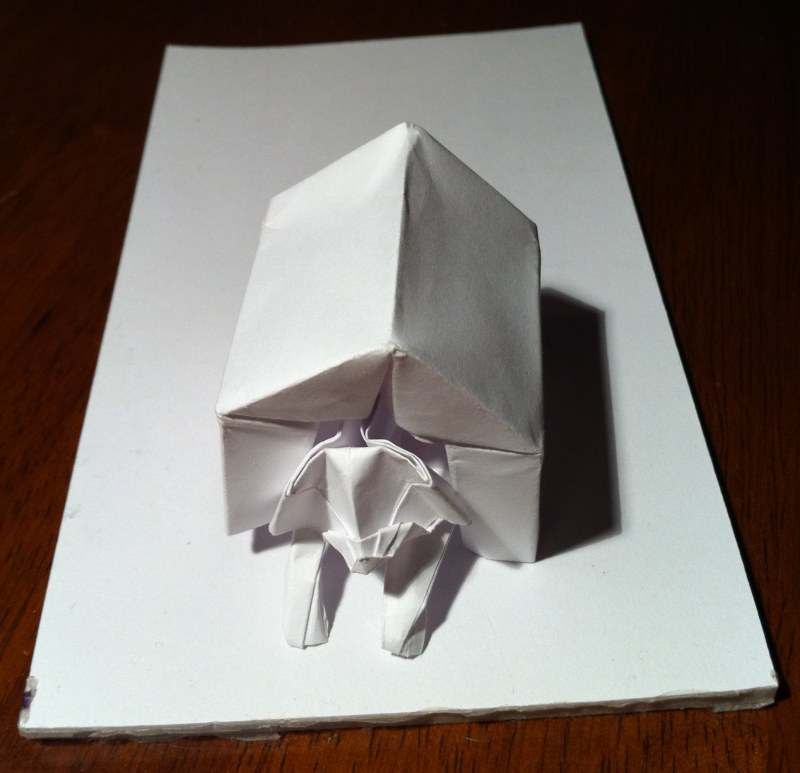 The show was wonderful, congratulations to all involved on such a slick production. It reminded me of how charming the characters Charles M Schultz created all those years ago and how relevant their observations of the world still are. 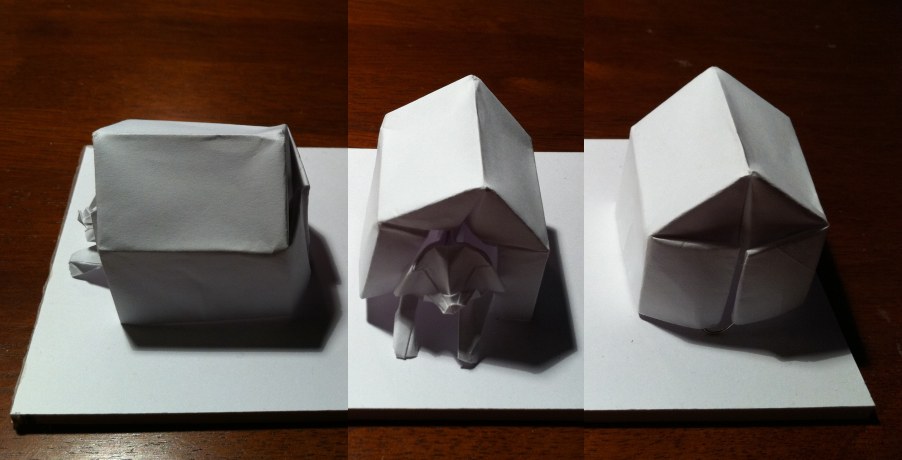 I looked for a Snoopy on his doghouse, but could not find a diagram, so settled on a Robert Lang model I had wanted to try – and I think this looks a little like Snoopy. Folded from “Origami Zoo”, a master work. 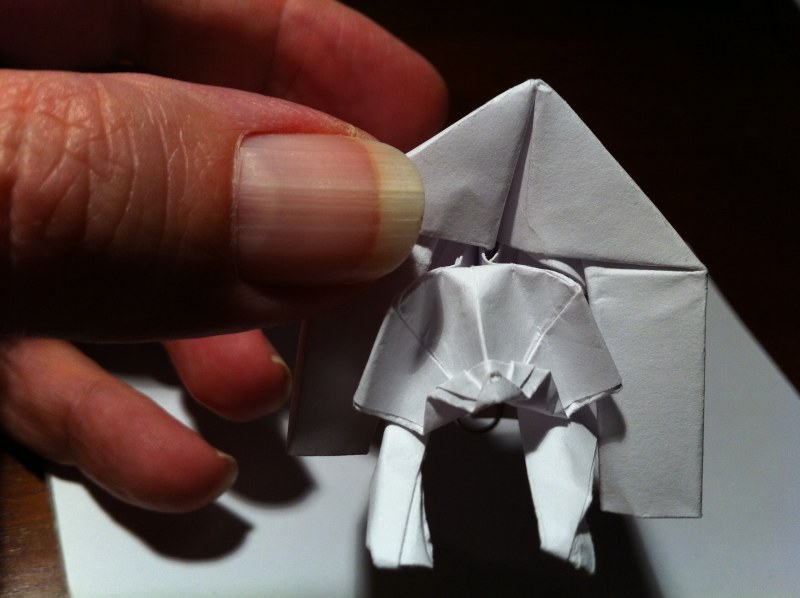 I like the posture and proportions of this model, expression in the dog and the fact that when I folded it, he looks like a naughty puppy banished to the doghouse.