Once we had the accommodation nailed, it was time to move on to deciding on museums, castles, palaces, galleries, gardens and most importantly, food destinations.

Peter has already explained our planning philosophy for Paris. Seriously we are visiting a lot of patisseries. We have also thrown in most of the major tourist attractions as well as some shopping.

In London, we had to be ruthless and cut our must-visit list down to a manageable size. The rest has been delegated to our “if we ever visit again” list. We have booked a table at Jamie Oliver’s Fifteen and bought tickets to see The Lion King at West End.

Three nights in Bath gives us a full day exploring its architecture as well as a mystic day at Avebury and Stonehenge. A stop for a Devon cream tea is planned on the way to a night in Penzance followed by a day of touring to try out the best of Cornish pasties. Four nights in Looe will give us the opportunity to pursue our must-dos in Cornwell – lunch in Padstow at one of Rick Stein’s restaurants, Port Isaac (aka Portwenn of Doc Martin fame), Eden Project and photographing fishing villages on the south coast.

Driving through Wales was added to our itinerary as a more scenic route to northern England than straight up the M1. We are taking 3 days to drive to Yorkshire via the Brecon Beacons, Snowdonia and Peak District with a day’s stop in Conwy to explore its castle. We intend to sample their lamb but not their black pudding.

We have planned day trips including Fountains Abbey, Harlow Carr Garden, Betty’s Tearooms and York Minster in Yorkshire. On the way to Carlisle, we intend to have a bit cheese,”Wensleydale, Grommit”. We included an overnight in Carlisle to give us an opportunity to ride the Settle-Carlisle railway. We then drive to our final UK destination, the Lakes District where we have some scenic walks and drives planned. We fly out from Manchester with a three night stopover in Singapore to eat at hawker stalls and recover jet lag. 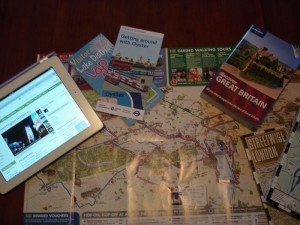