I was given a beautiful sheet of Unryushi tissue by a friend. The arrangement (in case YOU want to take part also) is if you give me nice paper, I will make you something out of it.

I prepared the paper by Methyl Cellulosing it to a clean window:

This make it crisp and strong, then, in a dragony frame of mind, I used Tadashi Mori’s own folding tutorial to fold a Darkness Dragon 2. 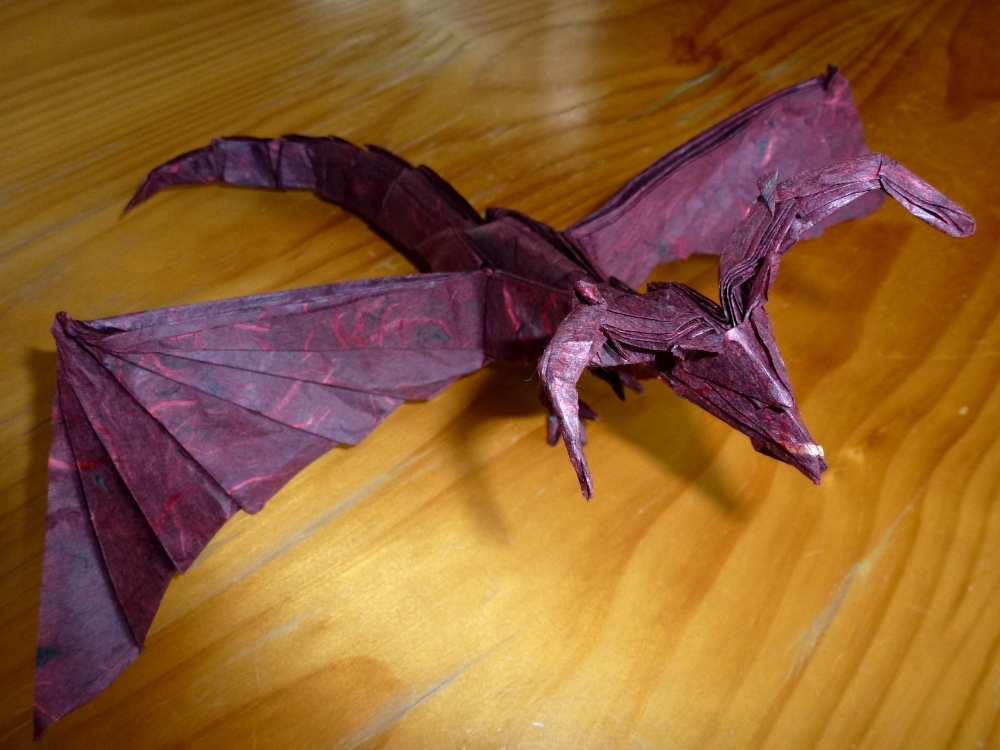 I had already folded the Darkness Dragon 1, but this model was a refinement I had not tried. There is a killer collapse after some exacting pre-folding – a sort of all these folds happen at the same time whilst inside a bunch of others, but the sense of it makes for a lovely body. 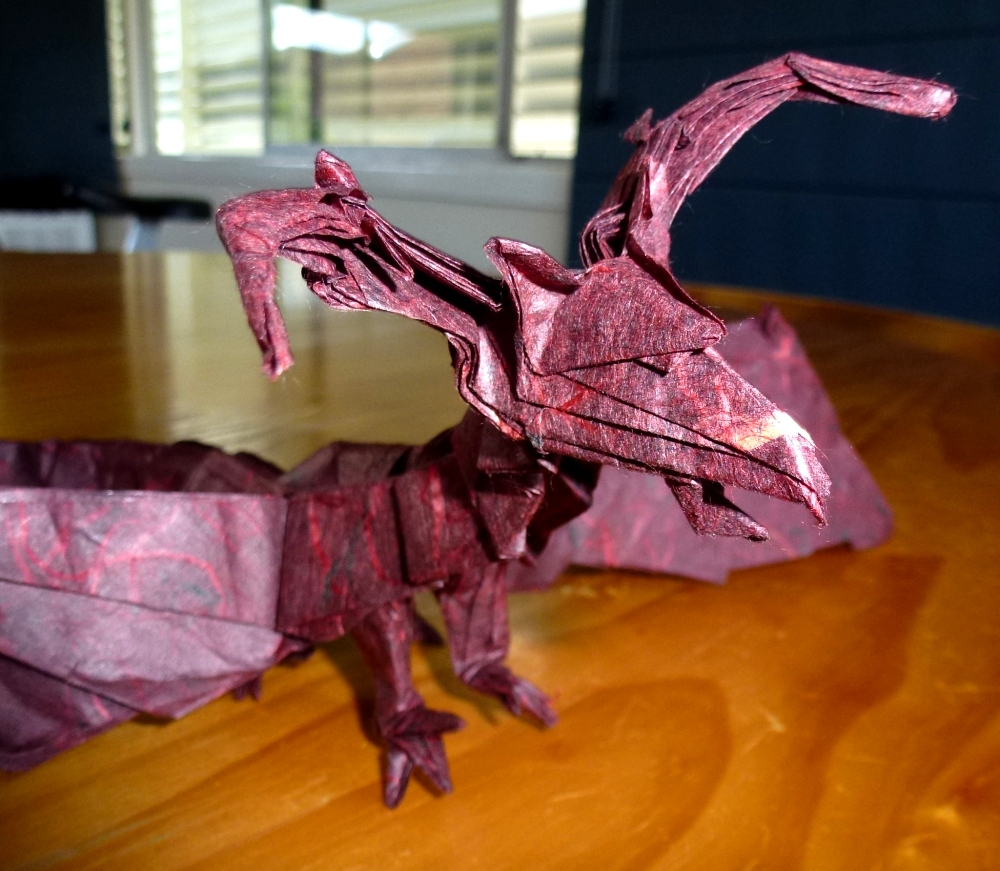 Prepped, the tissue was fine, crisp and lovely to fold – I MUST get more, it took creases faithfully, and with little posing it is keeping its shape also which is a bonus. 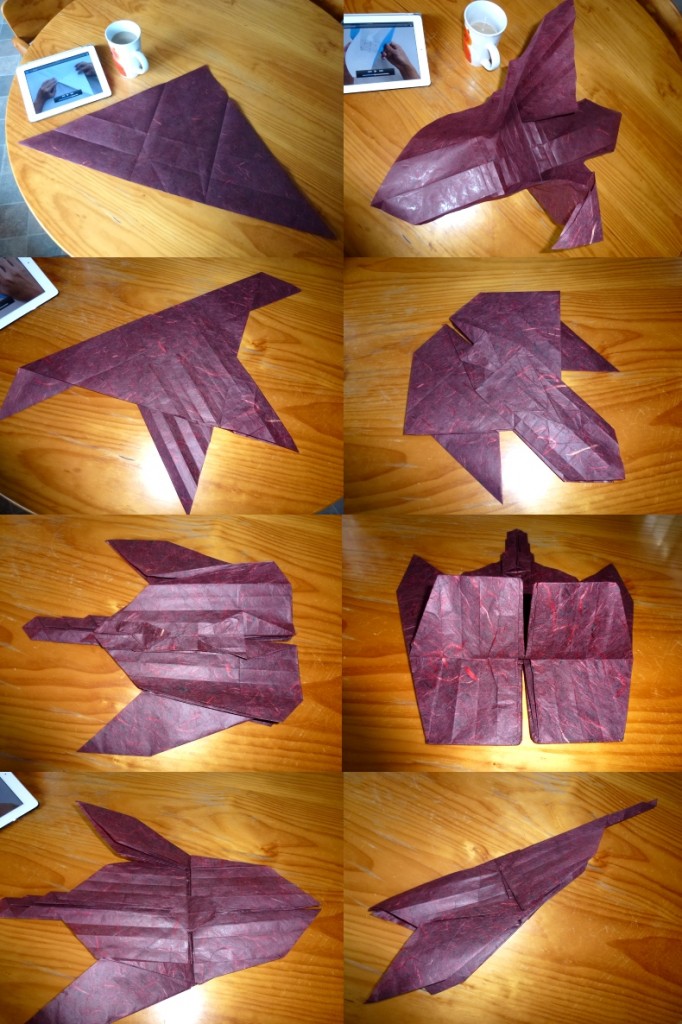 This is the second dragon I have folded for Karyn, a bit of an “Eragon” fan, I hope she likes it. 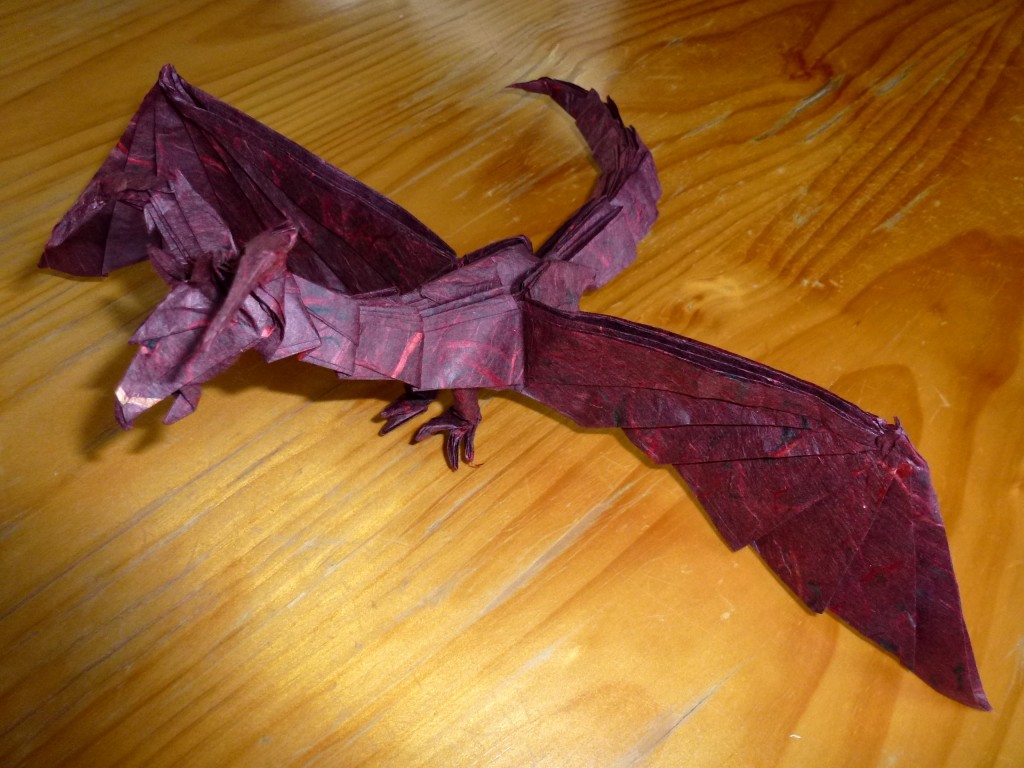 …now to come clean and also share a REVELATION:

This is actually the SECOND model I tried to fold out of this piece of paper. Originally, untreated, I attempted Satoshi Kamiya’s “Ancient Dragon” after sort of succeeding the first time, but the paper was so soft, like fabric and it was a horrible mess. Admitting defeat it was a scrunched up ball in the corner of my loungeroom when I remembered someone telling me how to prepare Unryushi BEFORE folding it – doh! – So I carefully unfolded the crumpled, much tortured mess – much to me amazement the paper was still whole, had NO holes and, apart from being really crunkled seemed sound. So I schlooped it to a glass window, flattening it with goop as I went and then .. sort of … hoped .. it would be useable after. Peeling it off the window as a sheet re-born was amazing – I learnt something – yay! Well, I learned a few things really but one thing I am impressed with it the just plain toughness of something that looks so flimsy. If you had not been told you would not have realised this was a second-hand sheet of paper – amazing right?