My second favorite sci-fi film of all time (Alien) brought new forms of terror to the screen: 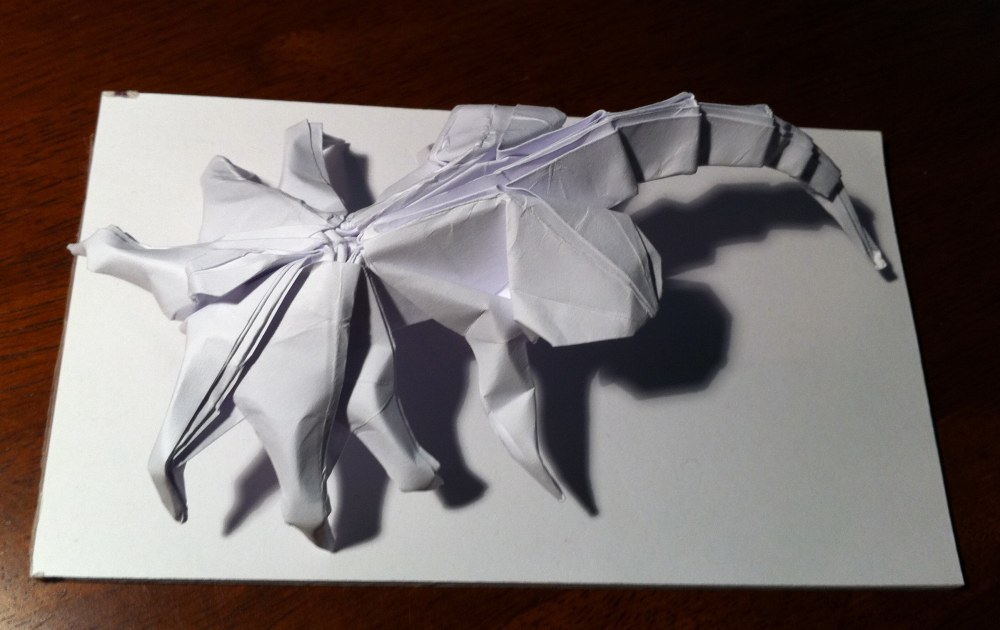 In a well tried formula, a nasty makes itself on board a spaceship firmly clamped to the face of an inquisitive explorer (John Hurt), implanting an egg in the host’s tummy before scaring everyone and dropping dead. The newly hatched nasty then systematically, and with great suspense, eats everyone – you get that. This prototype xenomorph is all the more terifying because, based on Geiger illustrations, organically modelled after a sinister hand.

Insectoid, reptilian, with gripsey fingers for walking, prehensile tail to wrap around the neck of the victim, off lung sacks for gas exchange, a well thought out model indeed (even if the instruction annotations were bewildering – thankfully I am confident enough to improvise when I cannot make head nor tail of what is supposed to go where)..

I have been a little crabby lately – not sure why: 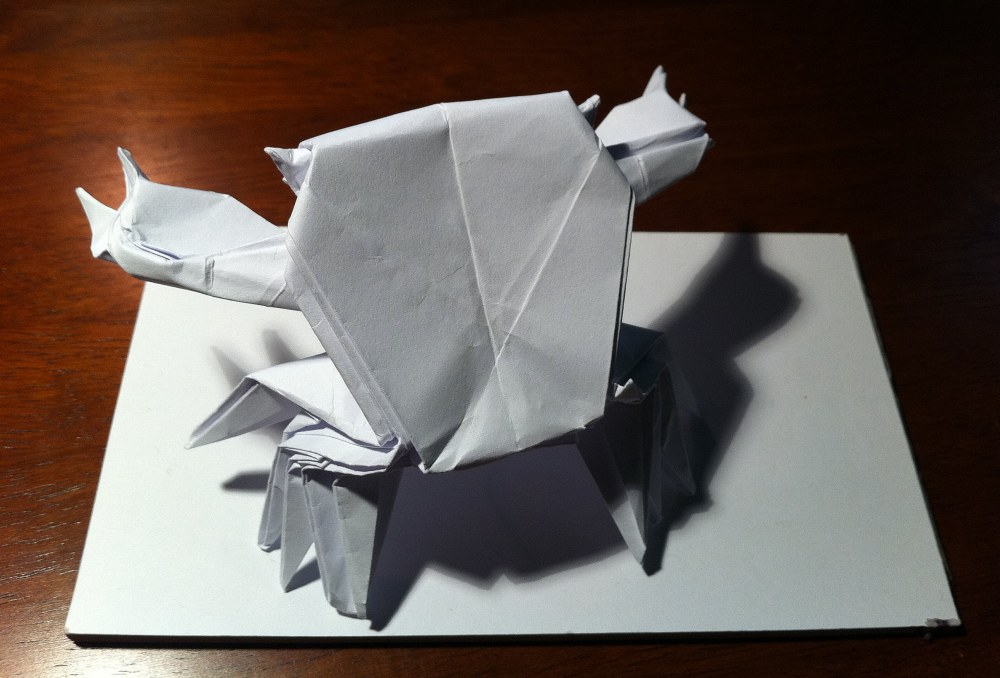 Times are busy, change is inevitable and I am not sure I cope well with it at times (prolly less well when I am tired) 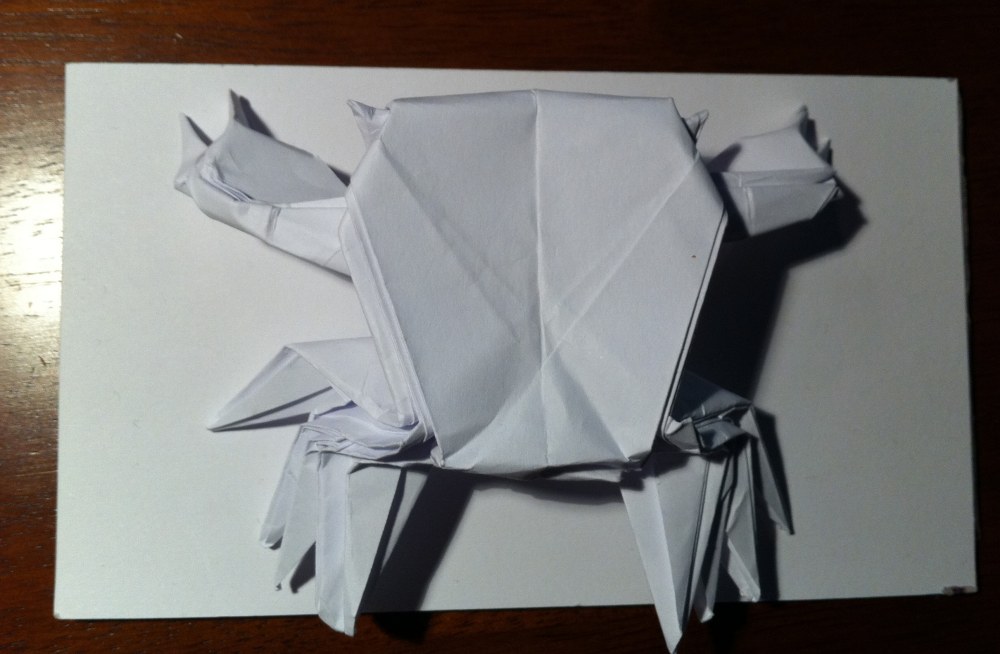 This is a lovely fold, based on a waterbomb base and teasing 8 legs from one set of flaps and claws from the others – very clever and not too difficult really (compared to others I am contemplating) – some neato pre-creasing makes most of the folds before you need them. 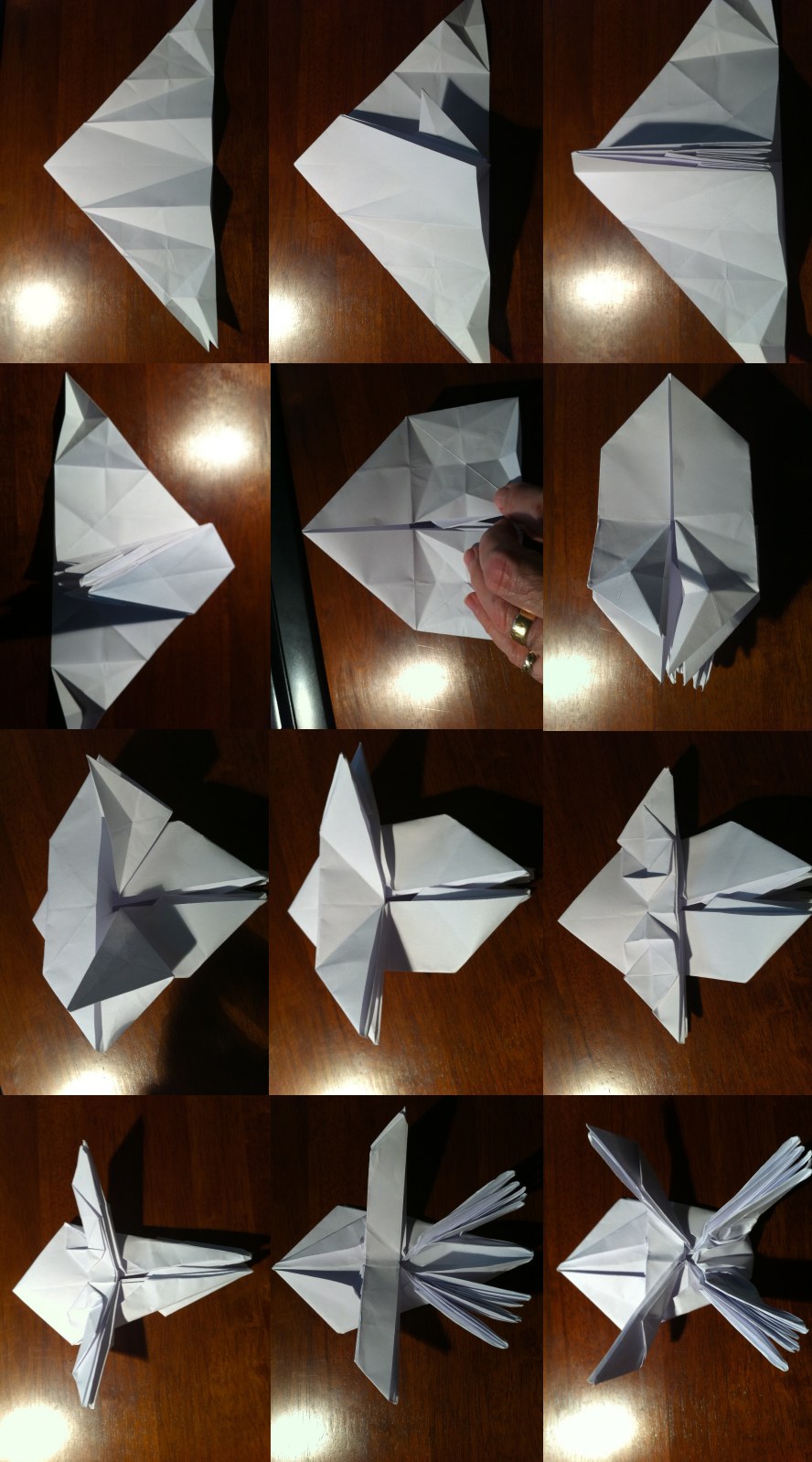 Sleep, chocolate and tea – perfect remedies for those times when you get a little crabby also.

Now in Australia, local waterholes and creek banks are often pock-marked with Yabbie-holes: 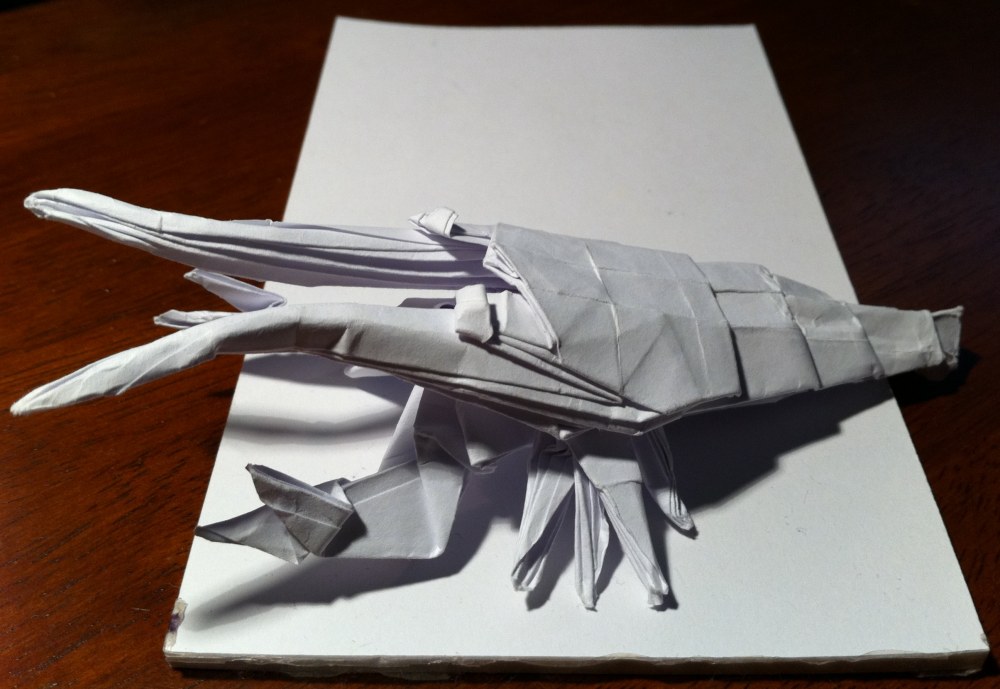 Yabbies are a sweet, freshwater crayfish that are related, albeit distantly, to the American Lobster more commonly seen off the Florida Coast 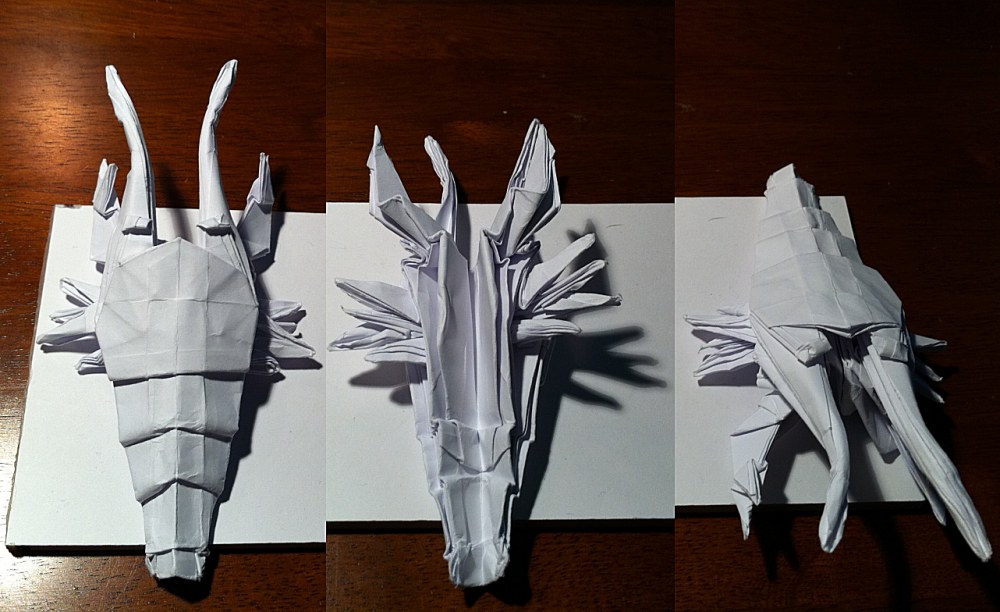 It is my brother-in-law’s Birthday today – happy Birthday Rob!!! he lives in Florida and dives for lobsters in his spare time – I thought it timely to remind him of his Australian equivalent. 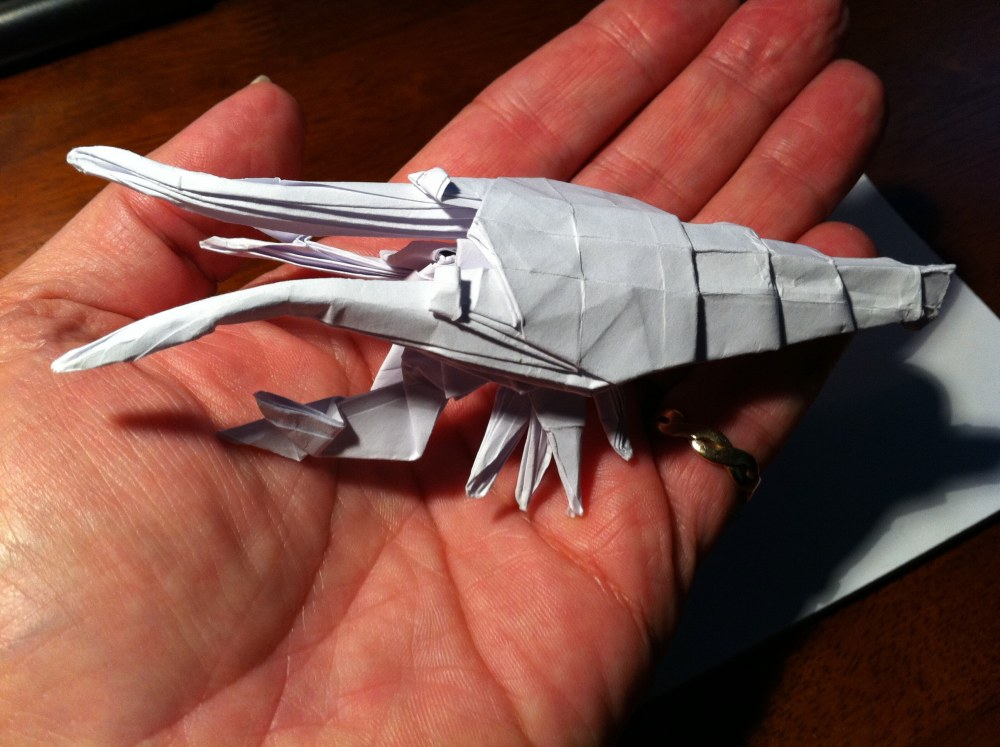 This is a torturous model on a lot of fronts – a collaboration between John Montroll and Robert Lang from the book “Origami Sealife”.  I shoulda tweaked that it was the LAST model in the book (traditionally the the final model in a book is the most challenging) but began folding it anyway – 3 1/2 hours later, after some serious swearing and no little amount of paper torture I ended up with a delightful model. 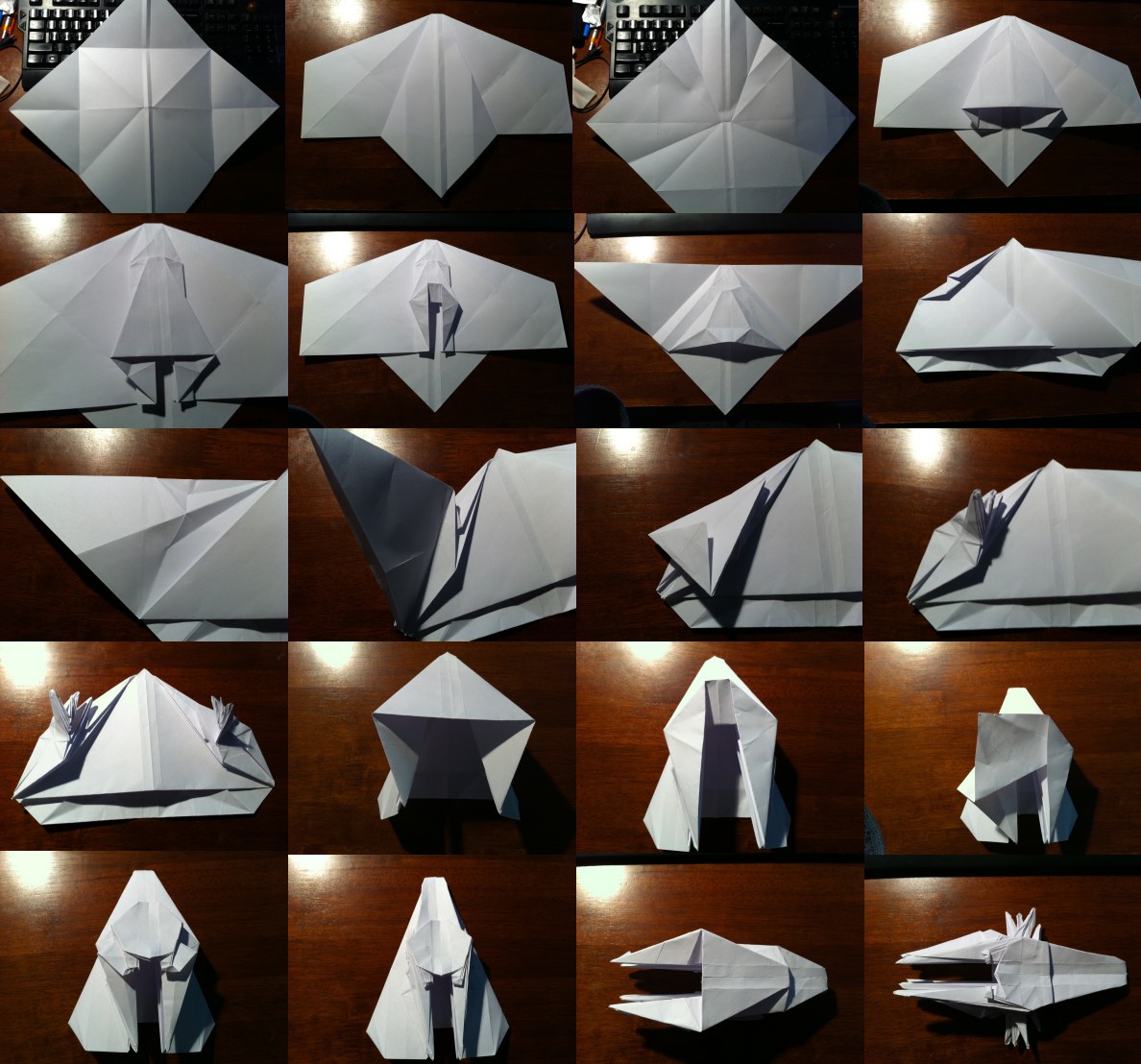 Folded from a square cut from an A3 copy paper page, this TINY end model is testament to a superb design as it is all tucked away into a plump body, 8 legs, 2 claws, 2 stalked eyes and a lovely pair of antennae. It looks like it would cook a treat.

Actually pretty amazed that I was able to fold it at all, many times I contemplated giving up (like 1/2 hour in when I discovered my square was not quite … square), or the formation of the 2 pairs of 6 legs via some extremely fine (3-5mm) folds. You know a model is tough when on 5 separate points, after folding a tight model you are instructed to unfold everything, turn it over and fold something new – the planning to get that crease patter is mind-buggering.

You may applaud now, reminds me of the prawns I cooked for dinner last night – throw another shrimp on the barbie Rob, many happy returns for your birthday.