There are many of what i would term “legendary” folds in the origami community – few more daunting that Brian Chan’s sculptural masterpiece “Attack Of The Kraken”: 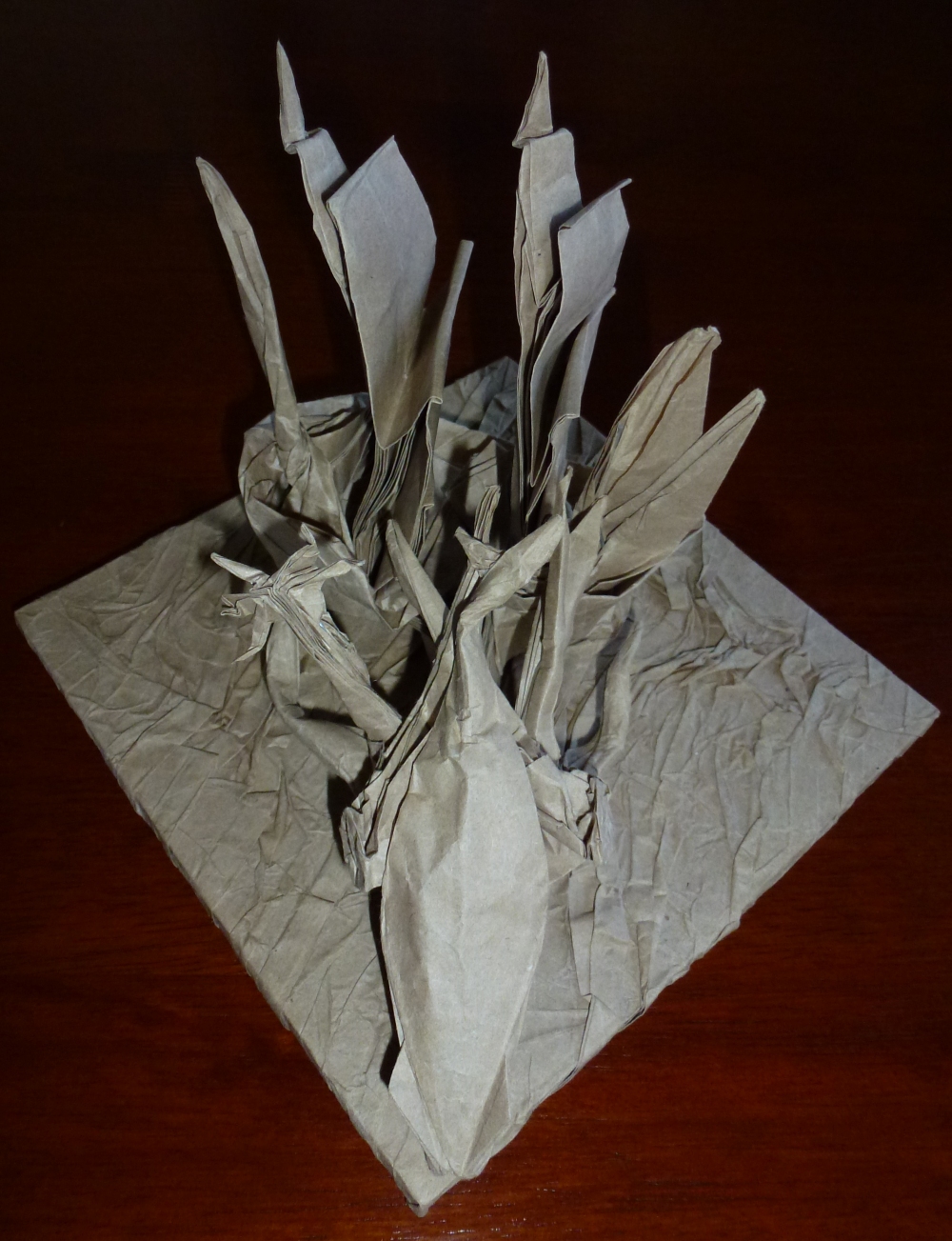 I first saw pictures of this model when trolling around the internet looking for paper challenges: one piece of paper, you bend both a masted ship and a sea monster ripping it asunder – impossible surely. Amidst the turmoil there exists tiny details also – one tentacle contains a shard of ship rigging, another grasps the terrified yet defiant Captain – look closer, is that Captain Jack? 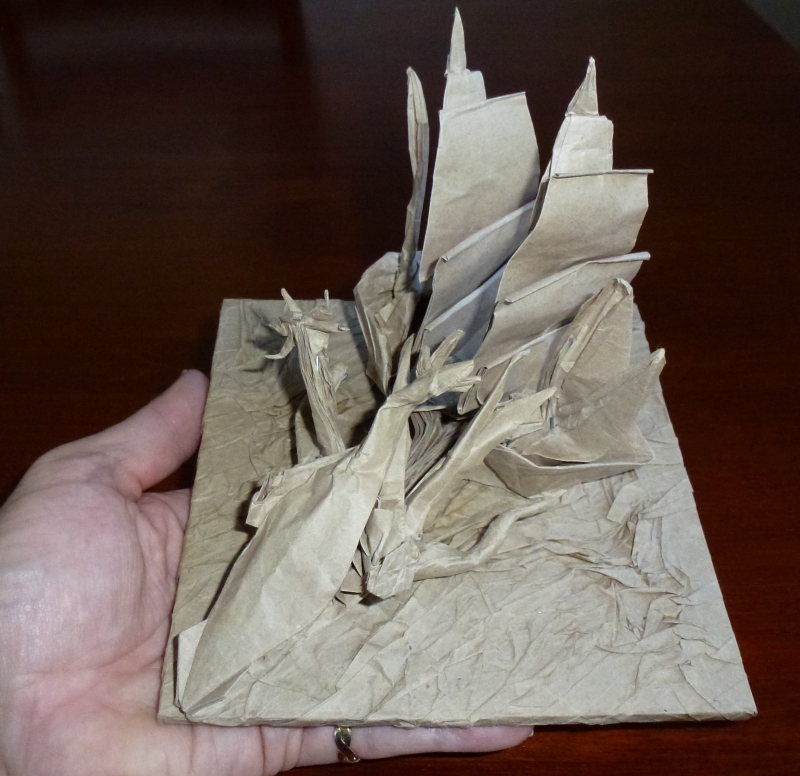 Annoyingly there seem to be no instructions on how to fold this thing – there was, however, a crease pattern adapted from a schematic Brian Chan tantalisingly left beside a display copy of his model so I started working on that. I photo-enlarged sections of the crease pattern and repeatedly folded them until I had discovered what to fold, in what order to make that section of the model work. 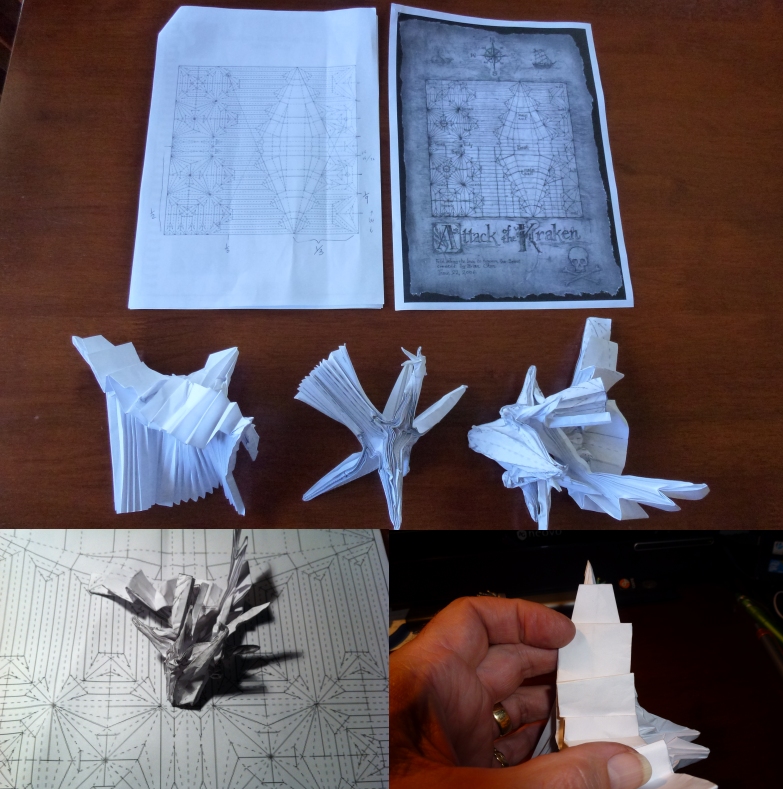 It took 2 aborted full-scale folded attempts to realise that there was regular geometry at the heart of this behemoth – working in 9ths and 72ths (ahh yes, why did I not realise this earlier) I was able to geometrically re-construct the crease pattern by folds alone (having failed miserably when using accurate measurements). Creases laid in (5.5hrs later) I began the collapse towards the base (another 6.5 hours+) until there was the vague tracery of a ship-shape and a tangled mess that would later become the sea monster. 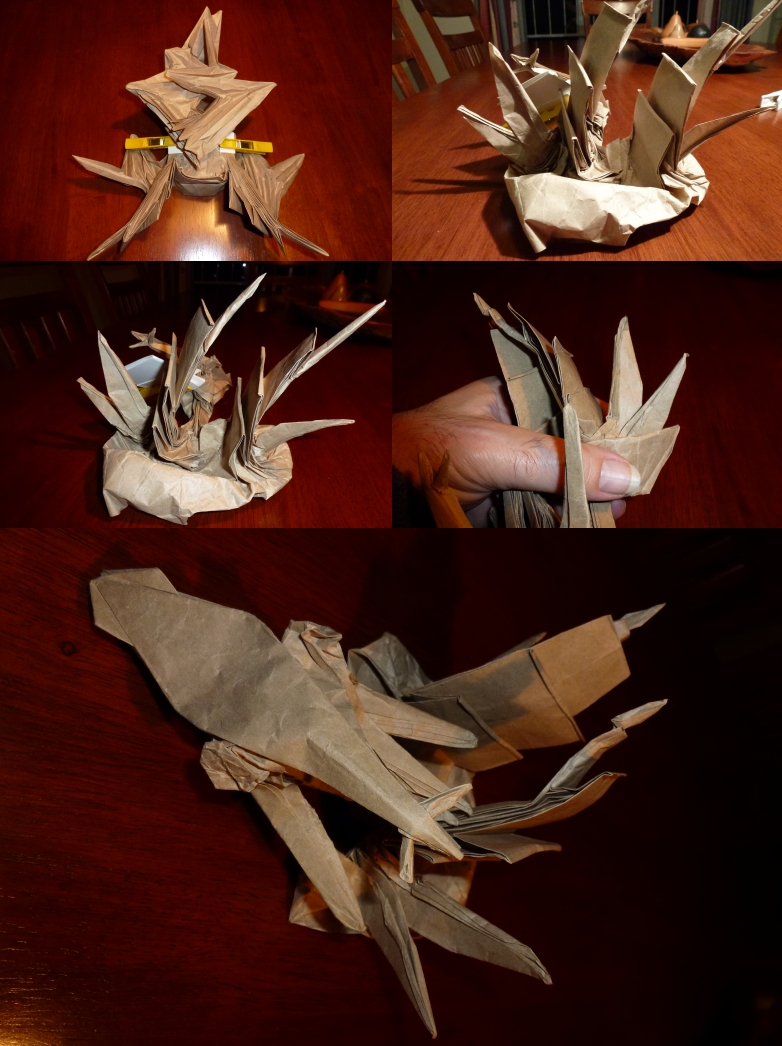 This model has taken me an age (well over 20 hours of actual paper wrangling all up) – the THIRD folding attempt has taken me as close as my patience and persistence will allow and I now at least know how the model works, what bits go where and also something about ship construction an squid morphology.

I have to say that I think, even though there are many aspects of my model I would improve if the paper were not now so fatigued that I am frightened to stress it further. 60cm square is NOT big enough, it was so damned fiddly to do all that collapsing that some parts are vaguely correct in shape, others less so.

I decided that I should mount it, to protect and display it mostly, so used botched folding attempt #2 as a ruffled seascape texture on some foamcore board. I added 8 wires (4 for the masts, 4 for selected tentacles of the kraken) so I could pose it better and must admit that worked pretty well.

I learned a lot about myself working on this model – precision, patience and not rushing to set a crease until you are sure it is right takes discipline and skill – I sometimes had that. I regretted every time I rushed something, was more satisfied when it was re-done better. I liked that I knew when to step away from the model and go test something – there were so many details that I had no idea how to fold initially but with a little tenacity in the end it came together. 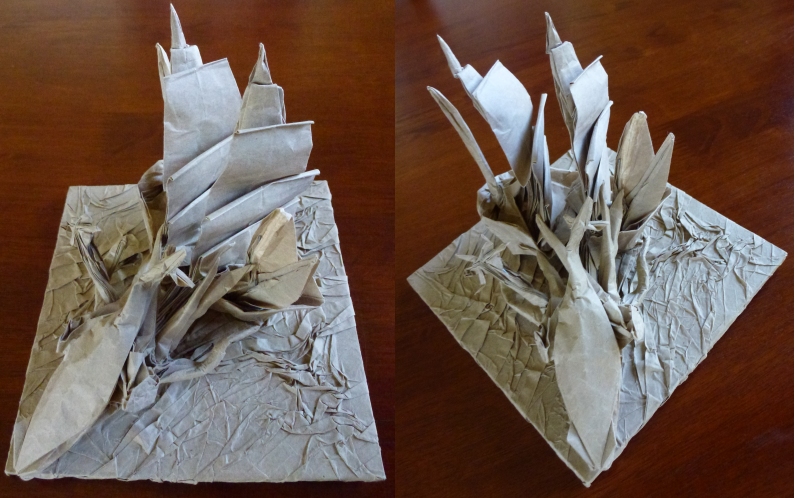 Just so you know, I will NOT be folding this again – i am satisfied enough with my third attempt, and really feel like I have achieved something with it. I hope you find the journey interesting.